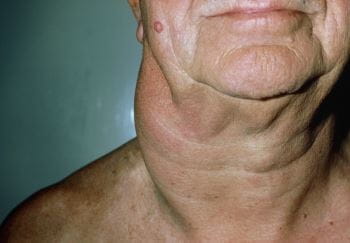 Non-Hodgkin Lymphoma
Non-Hodgkin lymphomas are a diverse group of cancers that develop in B or T cells (lymphocytes).

Lymphomas are cancers of a specific type of white blood cells known as lymphocytes Acquired Immunity One of the body's lines of defense (immune system) involves white blood cells (leukocytes) that travel through the bloodstream and into tissues, searching for and attacking microorganisms and... read more

. These cells help fight infections. Lymphomas can develop from either B or T lymphocytes. T lymphocytes are important in regulating the immune system and in fighting viral infections. B lymphocytes produce antibodies Antibodies One of the body's lines of defense (immune system) involves white blood cells (leukocytes) that travel through the bloodstream and into tissues, searching for and attacking microorganisms and... read more

, which are essential in fighting off some infections.

This group of cancers is actually more than 50 different diseases that involve B cells or T cells (lymphocytes), which are types of white blood cells Components of the Immune System The immune system is designed to defend the body against foreign or dangerous invaders. Such invaders include Microorganisms (commonly called germs, such as bacteria, viruses, and fungi) Parasites... read more . Each of these lymphomas has a distinct appearance under the microscope, a different cell pattern, and a different pattern of symptoms and progression. Most non-Hodgkin lymphomas (80 to 85%) are from B cells. Less than 15 to 20% develop from T cells.

In the United States, over 70,000 new cases are diagnosed every year, and the number of new cases is increasing, especially among older people and people whose immune system is not functioning normally. People who have had organ transplants and some people who have been infected with hepatitis C or the human immunodeficiency virus (HIV) are at risk of developing non-Hodgkin lymphoma.

, another type of non-Hodgkin lymphoma. Other suspected viral causes include hepatitis C virus Overview of Hepatitis Hepatitis is inflammation of the liver. (See also Overview of Acute Viral Hepatitis and Overview of Chronic Hepatitis.) Hepatitis is common throughout the world. Hepatitis can be Acute (short-lived) read more , Kaposi sarcoma Kaposi Sarcoma Kaposi sarcoma is a skin cancer that causes multiple flat pink, red, or purple patches or bumps on the skin. It is caused by human herpesvirus type 8 infection. One or a few spots may appear... read more

Other people at risk for non-Hodgkin lymphoma include those with

Some lymphomas can appear in the bloodstream and bone marrow, so people can develop symptoms related to too few red blood cells, white blood cells, or platelets. Too few red blood cells can cause anemia Overview of Anemia Anemia is a condition in which the number of red blood cells is low. Red blood cells contain hemoglobin, a protein that enables them to carry oxygen from the lungs and deliver it to all parts... read more , leading to fatigue, shortness of breath, and pale skin. Too few white blood cells can lead to infections. Too few platelets may lead to increased bruising or bleeding. Non-Hodgkin lymphomas can also invade the digestive tract, skin, and occasionally the nervous system, causing various symptoms. Some people have persistent fever without an evident cause, the so-called fever of unknown origin. This type of fever commonly reflects an advanced stage of disease.

In children, the first symptoms—anemia, rashes, and neurologic symptoms, such as weakness and abnormal sensation—are likely to be caused by infiltration of lymphoma cells into the bone marrow, blood, skin, intestine, brain, and spinal cord. Lymph nodes that become enlarged are usually deep ones, leading to the following:

Doctors suspect non-Hodgkin lymphoma when a person with no apparent infection develops persistent and painless enlargement of lymph nodes that lasts for several weeks. Sometimes enlarged lymph nodes deep within the chest or abdomen are found unexpectedly when a chest x-ray or computed tomography (CT) is done for another reason.

The type of biopsy depends on which node is enlarged and how much tissue is needed. Doctors must remove enough tissue to be able to distinguish non-Hodgkin lymphoma from other disorders that can cause lymph node enlargement, including Hodgkin lymphomas, infections, inflammation, or other cancers. The best way to obtain enough tissue is with an excisional biopsy (a small incision made to remove a piece of the lymph node). Occasionally, when an enlarged lymph node is close to the body's surface, a sufficient amount of tissue can be obtained by inserting a hollow needle (usually under ultrasound or CT guidance) through the skin and into the lymph node (core needle biopsy). When an enlarged lymph node is deep inside the abdomen or chest, surgery may be needed to obtain a piece of tissue.

Although more than 50 different disorders can be called non-Hodgkin lymphomas, doctors sometimes group them into two broad categories.

Indolent lymphomas are characterized by

Aggressive lymphomas are characterized by

The disease is classified into four stages based on the extent of its spread (I, II, III, IV). The higher the number, the more the lymphoma has spread.

The choice of treatment and the prognosis are based on the stage. Several procedures are used to stage or assess non-Hodgkin lymphoma. Basic blood tests, including a complete blood count and tests of liver and kidney function, are done.

) is the most sensitive technique for determining the location and size of cancerous lesions and how active the cancer cells are. If combined PET-CT scan is not available, a contrast CT scan of the chest, abdomen, and pelvis is done. Other tests such as magnetic resonance imaging (MRI) Magnetic Resonance Imaging (MRI) In magnetic resonance imaging (MRI), a strong magnetic field and very high frequency radio waves are used to produce highly detailed images. MRI does not use x-rays and is usually very safe... read more

of the brain or spinal cord are done if symptoms of the nervous system are present.

The treatment of non-Hodgkin lymphoma varies widely based on the subtype.

For some people with indolent lymphomas, treatment is not needed when the lymphoma is first diagnosed. Studies show that waiting does not compromise outcome and prevents the patient from being exposed to side effects of treatment. For people with indolent lymphomas, treatment, when needed, extends life and relieves symptoms for many years. For people with aggressive lymphomas, cure is possible and therefore waiting without treatment is not usually done. The likelihood of a cure or long-term survival depends on the type of non-Hodgkin lymphoma and the stage when treatment starts. It is somewhat of a paradox that indolent lymphomas usually respond readily to treatment by going into remission (in which the disease is under control), often followed by long-term survival, but the disease usually is not cured. In contrast, aggressive non-Hodgkin lymphomas, which usually require very intensive treatment to achieve remission, have a good chance of being cured.

People with indolent lymphomas who have very limited disease (stage I) are often treated with radiation therapy Radiation Therapy for Cancer Radiation is a form of intense energy generated by a radioactive substance, such as cobalt, or by specialized equipment, such as an atomic particle (linear) accelerator. Radiation preferentially... read more limited to the site of the lymphoma and adjacent areas. With this approach, most people do not have a disease recurrence in the irradiated area, but non-Hodgkin lymphomas can recur elsewhere in the body as long as 10 years after treatment, so people require long-term monitoring. People with aggressive lymphomas at a very early stage need to be treated with combination chemotherapy and sometimes radiation therapy.

Almost all people with indolent lymphomas have stage II to IV disease. They do not always require treatment initially, but they are monitored for evidence of lymphoma progression, which could signal a need for therapy, sometimes years after the initial diagnosis. There is no evidence that early treatment extends survival in people with indolent lymphomas at more advanced stages. If the disease begins to progress, there are many treatment choices.

Multiple treatment options exist, and the choice of treatment may depend on a variety of factors, including the lymphoma subtype, the extent of spread, and the person’s symptoms, and co-existing medical conditions. Treatment may include therapy with monoclonal antibodies (such as rituximab) alone or combined with chemotherapy Chemotherapy Chemotherapy involves the use of drugs to destroy cancer cells. Although an ideal drug would destroy cancer cells without harming normal cells, most drugs are not that selective. Instead, drugs... read more . Most treatments are given intravenously. Sometimes, oral drugs are used. Treatment usually produces a remission. The average length of remission depends on the intensity of the treatment. Sometimes treatment may also include maintenance therapy (therapy given after the initial treatment to help prevent relapse).

For people with aggressive stage II to IV non-Hodgkin lymphomas, combinations of chemotherapy Combination Cancer Therapy Cancer drugs are most effective when given in combination. The rationale for combination therapy is to use drugs that work by different mechanisms, thereby decreasing the likelihood that resistant... read more drugs are given promptly, often together with rituximab. Many potentially effective combinations of chemotherapy drugs are available. Combinations of chemotherapy drugs are often given names created by using the initial letter of each drug that is included. For example, one of the oldest and still one of the most commonly used combinations is known as CHOP (cyclophosphamide, [hydroxy]doxorubicin, vincristine [Oncovin], and prednisone). Rituximab has been shown to improve the outcome of CHOP and is now routinely added to the combination (R-CHOP). About 60 to 70% of people with aggressive non-Hodgkin lymphomas at an advanced stage are cured with R-CHOP chemotherapy. Newer combinations of drugs are being studied. Chemotherapy, which often causes different types of blood cells to decrease in number, is sometimes better tolerated if special proteins (called growth factors) are also given to stimulate growth and development of blood cells.

After treatment has been finished, people should have regular doctor's examinations and tests to look for return of the lymphoma (post-treatment surveillance). The type of tests depends on the patient's risk factors and type of treatment they received.

Most people who have a relapse of an aggressive lymphoma receive high doses of chemotherapy drugs combined with autologous stem cell transplantation Stem Cell Transplantation Stem cell transplantation is the removal of stem cells (undifferentiated cells) from a healthy person and their injection into someone who has a serious blood disorder. (See also Overview of... read more , involving the person's own stem cells. With this type of treatment, some people are cured. Sometimes stem cells from a sibling or even an unrelated donor (allogeneic transplant) can be used, but this type of transplantation has a greater risk of complications. Sometimes people are offered treatment with chimeric antigen receptor (CAR) T cells, which are T cells that have been genetically engineered to fight against lymphoma.

The following is an English-language resource that may be useful. Please note THE MANUAL is not responsible for the content of this resource.