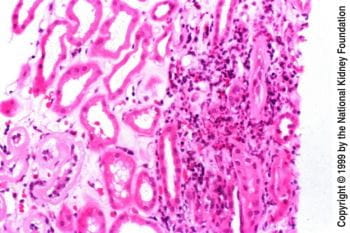 Causes of Chronic Tubulointerstitial Nephritis
Tubulointerstitial nephritis is primary injury to renal tubules and interstitium resulting in decreased renal function. The acute form is most often due to allergic drug reactions or to infections. The chronic form occurs with a diverse array of causes, including genetic or metabolic disorders, obstructive uropathy, and chronic exposure to environmental toxins or to certain drugs and herbs. Diagnosis is suggested by history and urinalysis and often confirmed by biopsy. Treatment and prognosis vary by the etiology and potential reversibility of the disorder at the time of diagnosis.

Primary tubulointerstitial nephritis may be

Acute tubulointerstitial nephritis (ATIN) involves an inflammatory infiltrate and edema affecting the renal interstitium that often develops over days to months. Over 95% of cases result from infection or an allergic drug reaction.

Chronic tubulointerstitial nephritis (CTIN) arises when chronic tubular insults cause gradual interstitial infiltration and fibrosis, tubular atrophy and dysfunction, and a gradual deterioration of renal function, usually over years. Concurrent glomerular involvement (glomerulosclerosis) is much more common in CTIN than in ATIN.

Causes of chronic tubulointerstitial nephritis are myriad; they include immunologically mediated disorders, infections, reflux or obstructive nephropathy, drugs, and other disorders. CTIN due to toxins, metabolic derangements, hypertension, and inherited disorders results in symmetric and bilateral disease; when CTIN is due to other causes, renal scarring may be unequal and involve only one kidney. Some well-characterized forms of CTIN include

may cause tubulointerstitial injury but the predominant pathology in these conditions is glomerular disease.

Symptoms and Signs of Tubulointerstitial Nephritis

Symptoms and signs of acute tubulointerstitial nephritis (ATIN) may be nonspecific and are often absent unless symptoms and signs of renal failure develop. Many patients develop polyuria and nocturia (due to a defect in urinary concentration and sodium reabsorption).

ATIN symptom onset may be as long as several weeks after initial toxic exposure or as soon as 3 to 5 days after a 2nd exposure; extremes in latency range from 1 day with rifampin to 18 months with a nonsteroidal anti-inflammatory drug (NSAID). Fever and urticarial rash are characteristic early manifestations of drug-induced ATIN, but the classically described triad of fever, rash, and eosinophilia is present in < 10% of patients with drug-induced ATIN. Abdominal pain, weight loss, and bilateral renal enlargement (caused by interstitial edema) may also occur in ATIN and with fever may mistakenly suggest renal cancer or polycystic kidney disease. Peripheral edema and hypertension are uncommon unless renal failure occurs.

Symptoms and signs are generally absent in chronic tubulointerstitial nephritis unless renal failure develops. Edema usually is not present, and blood pressure is normal or only mildly elevated in the early stages. Polyuria and nocturia may develop.

Few clinical and routine laboratory findings are specific for tubulointerstitial nephritis. Thus, suspicion should be high when the following are present:

Eosinophiluria cannot be relied upon to make or exclude the diagnosis. Other tests (eg, imaging) are usually necessary to differentiate ATIN or chronic tubulointerstitial nephritis (CTIN) from other disorders. A presumptive clinical diagnosis of ATIN is often made based on the specific findings mentioned above, but renal biopsy Renal biopsy Biopsy of the urinary tract requires a trained specialist (nephrologist, urologist, or interventional radiologist). Indications for diagnostic biopsy include unexplained nephritic or nephrotic... read more is necessary to establish a definitive diagnosis.

Urinalysis that shows signs of active kidney inflammation (active urinary sediment), including red blood cells (RBCs), white blood cells (WBCs), and WBC casts, and absence of bacteria on culture (sterile pyuria) is typical; marked hematuria and dysmorphic RBCs are uncommon. Eosinophiluria has traditionally been thought to suggest ATIN; however, the presence or absence of urinary eosinophils is not particularly useful diagnostically. Proteinuria is usually minimal but may reach nephrotic range with combined ATIN-glomerular disease induced by NSAIDs, ampicillin, rifampin, interferon alfa, or ranitidine.

Ultrasonography, radionuclide scanning, or both may be needed to differentiate acute tubulointerstitial nephritis from other causes of acute kidney injury when kidney biopsy is not possible. In ATIN, ultrasonography may show kidneys that are greatly enlarged and echogenic because of interstitial inflammatory cells and edema. Radionuclide scans may show kidneys avidly taking up radioactive gallium-67 or radionuclide-labeled white blood cells (WBCs). Positive scans strongly suggest ATIN (and indicate that acute tubular necrosis is less likely), but a negative scan does not exclude ATIN.

In acute tubulointerstitial nephritis, glomeruli are usually normal. The earliest finding is interstitial edema, typically followed by interstitial infiltration with lymphocytes, plasma cells, eosinophils, and a few polymorphonuclear leukocytes. In severe cases, inflammatory cells can be seen invading the space between the cells lining the tubular basement membrane (tubulitis); in other specimens, granulomatous reactions resulting from exposure to beta-lactam antibiotics, sulfonamides, mycobacteria, or fungi may be seen. The presence of noncaseating granulomas suggests sarcoidosis. Immunofluorescence or electron microscopy seldom reveals any pathognomonic changes.

Findings of CTIN are generally similar to those of ATIN, although urinary RBCs and WBCs are uncommon. Because CTIN is insidious in onset and interstitial fibrosis is common, imaging tests may show small kidneys with evidence of scarring and asymmetry.

In chronic tubulointerstitial nephritis, renal biopsy is not often done for diagnostic purposes but has helped characterize the nature and progression of tubulointerstitial disease. Glomeruli vary from normal to completely destroyed. Tubules may be absent or atrophied. Tubular lumina vary in diameter but may show marked dilation, with homogeneous casts. The interstitium contains varying degrees of inflammatory cells and fibrosis. Nonscarred areas appear almost normal. Grossly, the kidneys are small and atrophic.

In drug-induced ATIN, renal function usually recovers within 6 to 8 weeks when the causative drug is stopped, although some residual scarring is common. Recovery may be incomplete, with persistent azotemia above baseline. Prognosis is usually worse if ATIN is caused by NSAIDs than by other drugs. When other factors cause ATIN, histologic changes usually are reversible if the cause is recognized and removed; however, some severe cases progress to fibrosis and chronic kidney disease Chronic Kidney Disease Chronic kidney disease (CKD) is long-standing, progressive deterioration of renal function. Symptoms develop slowly and in advanced stages include anorexia, nausea, vomiting, stomatitis, dysgeusia... read more

. Regardless of cause, irreversible injury is suggested by the following:

In CTIN, prognosis depends on the cause and on the ability to recognize and stop the process before irreversible fibrosis occurs. Many genetic (eg, cystic kidney disease Overview of Cystic Kidney Disease Cystic kidney disease may be congenital or acquired. Congenital disorders may be inherited as autosomal dominant disorders or autosomal recessive disorders or have other causes (eg, sporadic... read more ), metabolic (eg, cystinosis), and toxic (eg, heavy metal) causes may not be modifiable, in which case CTIN usually evolves to end-stage renal disease Chronic Kidney Disease Chronic kidney disease (CKD) is long-standing, progressive deterioration of renal function. Symptoms develop slowly and in advanced stages include anorexia, nausea, vomiting, stomatitis, dysgeusia... read more

Treatment of both ATIN and CTIN is management of the cause.

For immunologically induced ATIN and sometimes drug-induced ATIN, corticosteroids (eg, prednisone 1 mg/kg orally once/day with gradual tapering of the dose over 4 to 6 weeks) may accelerate recovery.

Treatment of chronic tubulointerstitial nephritis often requires supportive measures such as controlling blood pressure and treating anemia associated with kidney disease. In patients with CTIN and progressive renal injury, angiotensin-converting enzyme (ACE) inhibitors or angiotensin II receptor blockers (ARBs) may slow disease progression but should not be used together because of an additive risk of hyperkalemia and accelerating disease progression.