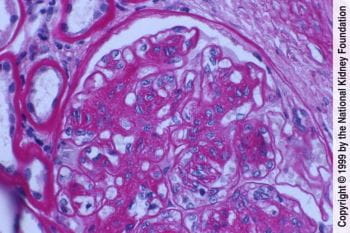 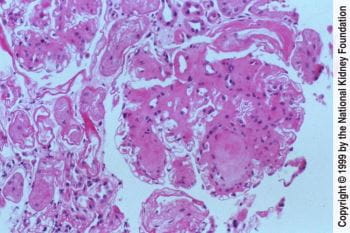 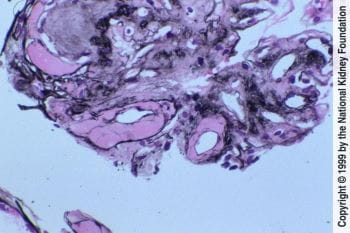 Diabetic nephropathy is the most common cause of nephrotic syndrome Overview of Nephrotic Syndrome Nephrotic syndrome is urinary excretion of > 3 g of protein/day due to a glomerular disorder plus edema and hypoalbuminemia. It is more common among children and has both primary and secondary... read more in adults. Diabetic nephropathy is also the most common cause of end-stage renal disease Chronic Kidney Disease Chronic kidney disease (CKD) is long-standing, progressive deterioration of renal function. Symptoms develop slowly and in advanced stages include anorexia, nausea, vomiting, stomatitis, dysgeusia... read more

in the US, accounting for up to 80% of cases. The prevalence of renal failure is probably about 40% among patients with type 1 diabetes mellitus Diabetes Mellitus (DM) Diabetes mellitus is impaired insulin secretion and variable degrees of peripheral insulin resistance leading to hyperglycemia. Early symptoms are related to hyperglycemia and include polydipsia... read more . The prevalence of renal failure among patients with type 2 diabetes mellitus is usually stated as 20 to 30%, but this figure is probably low. Renal failure is particularly common in certain ethnic groups, such as blacks, Mexican-Americans, Polynesians, and Pima Indians. Other risk factors include the following:

Because type 2 diabetes is often present for several years before being recognized, nephropathy often develops < 10 years after diabetes is diagnosed.

Renal failure usually takes ≥ 10 years after the onset of nephropathy to develop.

Lesions of diffuse or nodular intercapillary glomerulosclerosis are distinctive; areas of nodular glomerulosclerosis may be referred to as Kimmelstiel-Wilson lesions. There is marked hyalinosis of afferent and efferent arterioles as well as arteriosclerosis; interstitial fibrosis and tubular atrophy may be present. Only mesangial matrix expansion appears to correlate with progression to end-stage renal disease Chronic Kidney Disease Chronic kidney disease (CKD) is long-standing, progressive deterioration of renal function. Symptoms develop slowly and in advanced stages include anorexia, nausea, vomiting, stomatitis, dysgeusia... read more

and some measure of dependent edema eventually develop in most untreated patients.

In later stages, patients may develop symptoms and signs of uremia (eg, nausea, vomiting, anorexia) earlier (ie, with higher glomerular filtration rate [GFR]) than do patients without diabetic nephropathy, possibly because the combination of end-organ damage due to diabetes (eg, neuropathy) and renal failure worsens symptoms.

(indicating small vessel disease) or risk factors for diabetic nephropathy. Other renal disorders should be considered if there are any of the following:

Patients are tested for proteinuria by routine urinalysis; if proteinuria is present, testing for microalbuminuria is unnecessary because the patient already has macroalbuminuria suggestive of diabetic renal disease. In patients without proteinuria on urinalysis, an albumin/creatinine ratio should be calculated from a mid-morning urine specimen. A ratio ≥ 30 mg/g (≥ 34 mg/mmol) indicates microalbuminuria if it is present on at least 2 of 3 specimens within 3 to 6 months and if it cannot be explained by infection or exercise.

Some experts recommend that microalbuminuria be measured from a 24-hour urine collection, but this approach is less convenient, and many patients have difficulty accurately collecting a specimen. The random urine albumin/creatinine ratio overestimates 24-hour collection of microalbuminuria in up to 30% of patients > 65 due to reduced creatinine production from reduced muscle mass. Inaccurate results can also occur in very muscular patients or if vigorous exercise precedes urine collection.

For most patients with diabetes who have proteinuria, the diagnosis is clinical. Renal biopsy Renal biopsy Biopsy of the urinary tract requires a trained specialist (nephrologist, urologist, or interventional radiologist). Indications for diagnostic biopsy include unexplained nephritic or nephrotic... read more can confirm the diagnosis but is rarely necessary.

Patients with type 1 diabetes without known renal disease should be screened for proteinuria and, if proteinuria is absent on routine urinalysis, for microalbuminuria, beginning 5 years after diagnosis and at least annually thereafter.

Patients with type 2 diabetes should be screened at the time of diagnosis and annually thereafter.

Prognosis is good for patients who are meticulously treated and monitored. Such care is often difficult in practice, however, and most patients slowly lose renal function; even prehypertension (blood pressure [BP] 120 to 139/80 to 89 mm Hg) or stage 1 hypertension (BP 140 to 159/90 to 99 mm Hg) may accelerate injury. Systemic atherosclerotic disease Atherosclerosis Atherosclerosis is characterized by patchy intimal plaques (atheromas) that encroach on the lumen of medium-sized and large arteries; the plaques contain lipids, inflammatory cells, smooth muscle... read more

) predicts an increase in mortality.

Primary treatment is strict glucose control to maintain HbA1C ≤ 7.0; maintenance of euglycemia reduces microalbuminuria but may not retard disease progression once diabetic nephropathy is well established.

Glucose control must also be accompanied by strict control of BP to < 130/80 mm Hg, although some experts now recommend BP < 140/90 mm Hg. Some suggest BP should be 110 to 120/65 to 80 mm Hg, particularly in patients with protein excretion of > 1 g/day; however, others claim that BP values < 120/85 mm Hg are associated with increased cardiovascular mortality and heart failure.

Angiotensin inhibition is first-line therapy. Thus, angiotensin-converting enzyme (ACE) inhibitors or angiotensin II receptor blockers (ARBs) are the antihypertensives of choice; they reduce BP and proteinuria and slow the progression of diabetic nephropathy. ACE inhibitors are usually less expensive, but ARBs can be used instead if ACE inhibitors cause persistent cough. Treatment should be started when microalbuminuria is detected regardless of whether hypertension is present; some experts recommend drugs be used even before signs of renal disease appear.

Diuretics are required by most patients in addition to angiotensin inhibition to reach target BP levels. Dose should be decreased if symptoms of orthostatic hypotension develop or serum creatinine increases by more than 30%.

Nondihydropyridine calcium channel blockers (diltiazem and verapamil) are also antiproteinuric and renoprotective and can be used if proteinuria does not meaningfully decrease when target BP is reached or as alternatives for patients with hyperkalemia Hyperkalemia Hyperkalemia is a serum potassium concentration > 5.5 mEq/L (> 5.5 mmol/L), usually resulting from decreased renal potassium excretion or abnormal movement of potassium out of cells. There are... read more or other contraindications to ACE inhibitors or ARBs.

Dyslipidemia should also be treated.

Statins should be used as first-line therapy for dyslipidemia treatment in patients with diabetic nephropathy because they reduce cardiovascular mortality and urinary protein.

Treatments for edema can include the following:

. The 5-year survival rate for patients with type 2 diabetes receiving a kidney transplant is almost 60%, compared with 2% for dialysis-dependent patients who do not undergo transplantation (though this statistic probably represents significant selection bias). Kidney allograft survival rate is > 85% at 2 years.