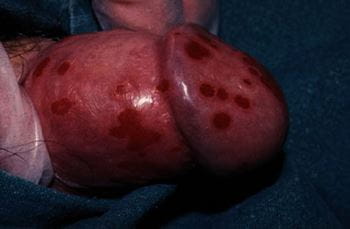 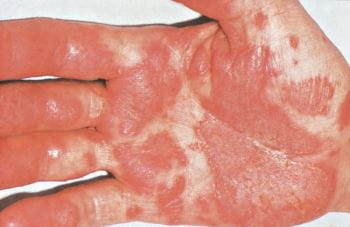 Keratoderma Blennorrhagicum of the Palm 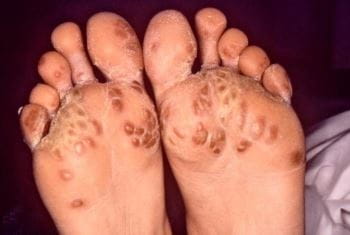 Reactive arthritis is so called because the joint inflammation seems to be a reaction to an infection originating in the digestive (gastrointestinal) tract or the genitals or urinary (genitourinary) organs.

There are two common forms of reactive arthritis:

Most people who have these infections do not develop reactive arthritis. People who develop reactive arthritis after exposure to these infections seem to have a genetic predisposition to this type of reaction, related in part to the same HLA-B27 gene found in people who have ankylosing spondylitis Ankylosing Spondylitis Ankylosing spondylitis is a spondyloarthritis characterized by inflammation of the spine (spondylitis), large joints, and fingers and toes, resulting in stiffness and pain. Prolonged joint pain... read more

. There is some evidence that the chlamydia bacteria and possibly other bacteria actually spread to the joints, but the roles of the infection and the immune reaction to it are not clear.

Reactive arthritis may be accompanied by inflammation of the conjunctiva Overview of Conjunctival and Scleral Disorders The conjunctiva is the membrane that lines the eyelid and loops back to cover the sclera (the tough white fiber layer covering the eye), right up to the edge of the cornea (the clear layer in... read more and the mucous membranes (such as those of the mouth and genitals) and by a distinctive rash. This form of reactive arthritis previously was called Reiter syndrome.

In reactive arthritis, joint pain and inflammation may be mild or severe. Several joints are usually affected at once—especially the knees, toe joints, and areas where tendons are attached to bones, such as at the heels. Often, the large joints of the lower limbs are affected the most. Reactive arthritis often involves joints less symmetrically than rheumatoid arthritis Rheumatoid Arthritis (RA) Rheumatoid arthritis is an inflammatory arthritis in which joints, usually including those of the hands and feet, are inflamed, resulting in swelling, pain, and often destruction of joints.... read more

. Tendons may be inflamed and painful. Back pain may occur, usually when the disease is severe. Other symptoms include a low-grade fever, weight loss, and excessive fatigue.

Inflammation of the urethra (urethritis Urethritis Urethritis is infection of the urethra, the tube that carries urine from the bladder out of the body. Bacteria, including those that are sexually transmitted, are the most common cause of urethritis... read more —the channel that carries urine from the bladder to the outside of the body) can develop, usually about 7 to 14 days after an infection (after sexual contact or sometimes after diarrhea).

The conjunctiva (the membrane that lines the eyelid and covers the eyeball) can become red and inflamed, causing itching or burning, sensitivity to light, and sometimes pain and excessive tearing.

Small and usually painless or sometimes tender sores can develop in the mouth and on the tongue. Occasionally, a distinctive rash of hard, thickened spots may develop on the skin, especially of the palms and soles and around the nails (keratoderma blennorrhagicum).

The combination of joint symptoms and a preceding infection, particularly if the person has genital, urinary, skin, and eye symptoms, leads a doctor to suspect reactive arthritis. Because these symptoms may not appear simultaneously, the disease may not be diagnosed for several months.

No simple laboratory tests are available to confirm the diagnosis of reactive arthritis, but x-rays Plain X-Rays X-rays are high-energy radiation waves that can penetrate most substances (to varying degrees). In very low doses, x-rays are used to produce images that help doctors diagnose disease. In high... read more are sometimes done to assess the status of joints. Tests may be done to exclude other disorders that can cause similar symptoms.

In most people, the initial symptoms of reactive arthritis disappear in 3 or 4 months, but up to 50% of people have recurring joint inflammation or other symptoms over several years.

Deformities of the joints, spine, and joint between the spine and the hip bone (sacroiliac joint) may develop if the symptoms persist or recur frequently. Some people who have reactive arthritis become permanently disabled.

When reactive arthritis is caused by infection of the genitals or urinary tract, antibiotics are given, but this treatment does not always relieve the arthritis and its optimal duration is not known.

Joint inflammation is usually treated with a nonsteroidal anti-inflammatory drug Nonsteroidal Anti-Inflammatory Drugs In some cases, treating the underlying disorder eliminates or minimizes the pain. For example, setting a broken bone in a cast or giving antibiotics for an infected joint helps reduce pain.... read more (NSAID). Sulfasalazine or drugs that suppress the immune system (such as azathioprine or methotrexate) may be used, as in rheumatoid arthritis Diagnosis Rheumatoid arthritis is an inflammatory arthritis in which joints, usually including those of the hands and feet, are inflamed, resulting in swelling, pain, and often destruction of joints.... read more

Corticosteroids can also be injected into a severely inflamed joint or inflamed tendons to relieve symptoms.

Physical therapy Physical Therapy (PT) Physical therapy, a component of rehabilitation, involves exercising and manipulating the body with an emphasis on the back, upper arms, and legs. It can improve joint and muscle function, helping... read more is helpful in maintaining joint mobility during the recovery phase.

Conjunctivitis and skin sores do not usually need to be treated, although severe eye inflammation (uveitis Uveitis Uveitis is inflammation anywhere in the pigmented inside lining of the eye, known as the uvea or uveal tract. The uveal tract may become inflamed because of infection, injury, a bodywide autoimmune... read more ) may require corticosteroid and dilating eye drops.