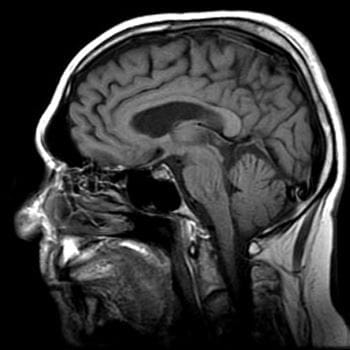 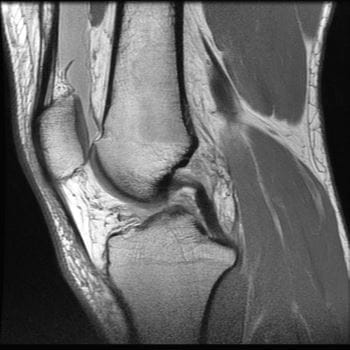 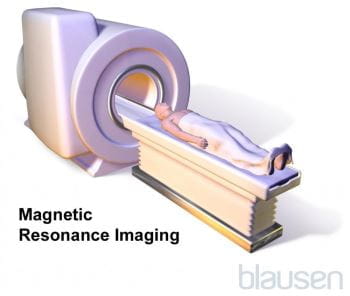 In magnetic resonance imaging (MRI), a strong magnetic field and very high frequency radio waves are used to produce highly detailed images. MRI does not use x-rays and is usually very safe. (See also Overview of Imaging Tests Overview of Imaging Tests Imaging tests provide a picture of the body’s interior—of the whole body or part of it. Imaging helps doctors diagnose a disorder, determine how severe the disorder is, and monitor people after... read more .)

For MRI, a person lies on a motorized table that is moved into the narrow interior of a large tubular scanner, which produces a strong magnetic field. Normally, protons (positively charged parts of an atom) in tissues are in no particular arrangement. But when protons are surrounded by a strong magnetic field, as in an MRI scanner, they line up with the magnetic field. Then, the scanner emits a pulse of radio waves, which momentarily knocks the protons out of line. As the protons line up with the magnetic field again, they release energy (called signals). The strength of the signal varies by tissue. The MRI scanner records these signals. A computer is used to analyze the signals and produce images.

Examiners can change how various tissues appear on a scan by varying the radio wave pulses, the strength and direction of the magnetic field, and other factors. For example, fat tissue appears dark on one type of scan and bright on another. These different scans provide complementary information, so more than one is often obtained.

Before the test, people remove most or all of their clothing and are given a gown that has no buttons, snaps, zippers, or other metal on it to wear. All metal objects (such as keys, jewelry, and cell phones) and other objects that could be affected by the magnetic field (such as credit cards and watches) should be left outside the MRI scanning room. People must lie still when images are taken and may have to hold their breath at times. Because the scanner makes loud banging noises, people may be given headphones or ear plugs to wear. A scan may take 20 to 60 minutes. After the test, people can resume their usual activities immediately.

(CT) when doctors need more detail about soft tissues—for example, to image abnormalities in the brain, spinal cord, muscles, and liver. MRI is particularly useful for identifying tumors in these tissues.

MRI is also used to do the following:

MRI is also used when the risks of CT are high. For example, MRI may be preferred for people who have had a reaction to the iodinated contrast agents Radiographic Contrast Agents During imaging tests, contrast agents may be used to distinguish one tissue or structure from its surroundings or to provide greater detail. Contrast agents include Radiopaque contrast agents... read more used in CT and for pregnant women (because radiation can cause problems in the fetus).

MRI done after a gadolinium contrast agent is injected into a vein helps doctors evaluate inflammation, tumors, and blood vessels. Injecting this agent into a joint helps doctors get a clearer picture of joint abnormalities, particularly if they are complex (as in injuries or degeneration of ligaments and cartilages in the knee).

This technique detects metabolic changes that occur when the brain is active. Thus, it can show which areas of the brain are active when a person does a specific task, such as reading, writing, remembering, calculating, or moving a limb. Functional MRI can be used in research and clinical settings, for example, to plan brain epilepsy surgeries.

With this technique, doctors can estimate blood flow in a particular area. This information can be useful during a stroke to determine whether blood flow to parts of the brain is decreased. It can also be used to identify areas where blood flow is increased—for example, in tumors.

This technique detects changes in water movement in cells that are not functioning normally. It is used primarily to identify early stroke. It is also used to detect certain brain disorders and to determine whether tumors have spread to the brain, or to differentiate a brain abscess from a tumor. Use of this technique to image areas other than the brain is limited. Diffusion-weighted MRI is often combined with other techniques to evaluate tumors, mostly in the brain.

This technique uses radio waves that are emitted almost continuously rather than in pulses as in conventional MRI. Magnetic resonance spectroscopy is used to detect brain disorders, such as seizure disorders, Alzheimer disease, and brain tumors and abscesses. It can distinguish between the dead debris inside an abscess and multiplying cells inside a tumor.

This technique is also used to evaluate metabolic disorders in muscles and the nervous system.

, can provide detailed images of blood vessels. However, it is safer and easier to do, although more expensive. Often, MRA can be done without injection of a contrast agent.

Magnetic resonance angiography can show blood flow through arteries and veins or blood flow only in one direction and thus show only arteries or only veins. As in CT angiography, a computer is used to remove all tissues except the blood vessels from the image.

Often, a gadolinium contrast agent is injected into a vein to outline blood vessels. The examiner carefully times the scanning so that the images are taken when gadolinium is concentrated in the blood vessels being evaluated.

MRA is used to evaluate blood vessels of the brain, heart, abdominal organs, arms, and legs. It is used to detect the following:

This term refers specifically to MRA of veins. It is often used to detect a blood clot in a vein that carries blood away from the brain (cerebral venous thrombosis) and to monitor the effect of treatment on this disorder.

This ultrafast technique produces sequences of images in seconds. It can be used to image the brain, heart, and abdomen. Because it is fast, movement by the person being examined does not blur the images as much. Also, the technique can provide information about how tissues are functioning.

However, it requires special equipment and is more likely to misrepresent certain structures than conventional MRI because of the nature of the technique.

The time needed for MRI is longer than that needed for CT. Also, MRI is usually less likely to be immediately available than CT. Thus, CT may be better in emergencies, such as serious injuries and stroke. MRI is also more expensive than CT.

Space in the MRI scanner is small and enclosed, making some people feel claustrophobic, even people who usually are not anxious about confined spaces. Some obese people have difficulty fitting within the scanner.

People who are anxious about MRI can be given an antianxiety drug, such as alprazolam or lorazepam, 15 to 30 minutes before scanning.

Usually, MRI is not used if people have

These devices include some cardiac pacemakers, defibrillators, cochlear implants, and magnetic metallic clips used to treat aneurysms. The magnetic field used in MRI can cause an implanted device to move, overheat, or malfunction. The device is more likely to be affected if it was implanted within the previous 6 weeks (because scar tissue, which can help hold the device in place, has not yet formed). These devices can also distort MRI images.

Some devices, such as common dental implants, an artificial hip, or rods used to straighten the spine, are not affected by MRI.

Before MRI is done, people who have any implanted devices should tell their doctor, who can determine whether imaging is safe.

The MRI magnetic field is very strong and always on. Thus, if a metal object (such as an oxygen tank or an IV pole) is near the entrance of the scanning room, the object may be pulled into the scanner at high speed. The person being evaluated may be injured, and separating the object from the magnet may be difficult.

Reactions to the MRI contrast agent

Gadolinium contrast agents can cause headache, nausea, pain and a sensation of cold at the injection site, distortion of taste, and dizziness.

These agents are much less likely to cause severe reactions than the iodinated contrast agents used in conventional and CT angiography.

However, nephrogenic systemic fibrosis—a severe, life-threatening disorder—can develop when gadolinium agents are used in people who already have severe kidney problems or who are undergoing dialysis. In nephrogenic systemic fibrosis, the skin, connective tissue, and organs thicken. Red or dark patches may develop on the skin, the skin may feel tight, movement is difficult and limited, and organs may malfunction. To prevent this disorder from developing, doctors do the following:

Computed Tomography and Magnetic Resonance Imaging of the Digestive Tract