, dyspnea Dyspnea Dyspnea is unpleasant or uncomfortable breathing. It is experienced and described differently by patients depending on the cause. Although dyspnea is a relatively common problem, the pathophysiology... read more , and hypoxia Oxygen Desaturation Patients without respiratory disorders who are in the intensive care unit (ICU)—and other patients—may develop hypoxia (oxygen saturation 90%) during a hospital stay. Hypoxia in patients with... read more 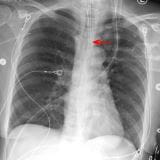 In adults, sudden cardiac arrest results primarily from cardiac disease (of all types, with more than 15% of sudden cardiac arrest attributable to acute coronary syndromes Overview of Acute Coronary Syndromes (ACS) Acute coronary syndromes result from acute obstruction of a coronary artery. Consequences depend on degree and location of obstruction and range from unstable angina to non–ST-segment elevation... read more , and a large majority associated with underlying cardiovascular disease). In a significant percentage of patients, sudden cardiac arrest is the first manifestation of heart disease. Other causes include circulatory shock due to noncardiac disorders (especially pulmonary embolism Pulmonary Embolism (PE) Pulmonary embolism (PE) is the occlusion of pulmonary arteries by thrombi that originate elsewhere, typically in the large veins of the legs or pelvis. Risk factors for pulmonary embolism are... read more

, gastrointestinal hemorrhage Overview of Gastrointestinal Bleeding Gastrointestinal (GI) bleeding can originate anywhere from the mouth to the anus and can be overt or occult. The manifestations depend on the location and rate of bleeding. (See also Varices... read more , or trauma), ventilatory failure, and metabolic disturbance (including drug overdose).

In infants and children, cardiac causes of cardiac arrest are less common than in adults. The predominant cause of cardiac arrest in infants and children is respiratory failure due to various respiratory disorders (eg, airway obstruction, drowning Drowning Drowning is respiratory impairment resulting from submersion in a liquid medium. It can be nonfatal (previously called near drowning) or fatal. Drowning results in hypoxia, which can damage... read more , infection, sudden infant death syndrome [SIDS] Sudden Infant Death Syndrome (SIDS) Sudden infant death syndrome is the sudden and unexpected death of an infant or young child between 2 weeks and 1 year of age in which an examination of the death scene, thorough postmortem... read more , smoke inhalation Smoke Inhalation When smoke is inhaled, toxic products of combustion injure airway tissues and/or cause metabolic effects. Hot smoke usually burns only the pharynx because the incoming gas cools quickly. An... read more ). However, sudden cardiac arrest (the unexpected cessation of circulation without warning) in children and adolescents is most commonly due to arrhythmia Overview of Arrhythmias The normal heart beats in a regular, coordinated way because electrical impulses generated and spread by myocytes with unique electrical properties trigger a sequence of organized myocardial... read more

resulting from a channelopathy or underlying structural cardiac abnormality ( 1–3 Etiology references Cardiac arrest is the cessation of cardiac mechanical activity resulting in the absence of circulating blood flow. Cardiac arrest stops blood from flowing to vital organs, depriving them of... read more ).

Cardiac arrest causes global ischemia with consequences at the cellular level that adversely affect organ function after resuscitation. The main consequences involve direct cellular damage and edema formation. Edema is particularly harmful in the brain, which has minimal room to expand, and often results in increased intracranial pressure and corresponding decreased cerebral perfusion postresuscitation. A significant proportion of successfully resuscitated patients have short-term or long-term cerebral dysfunction manifested by altered alertness (from mild confusion to coma), seizures, or both.

Inflammatory mediators (eg, interleukin-1B, tumor necrosis factor-alpha) are elaborated; some of them may cause microvascular thrombosis and loss of vascular integrity with further edema formation. Some mediators trigger apoptosis, resulting in accelerated cell death.

In critically or terminally ill patients, cardiac arrest is often preceded by a period of clinical deterioration with rapid, shallow breathing, arterial hypotension, and a progressive decrease in mental alertness. In sudden cardiac arrest, collapse occurs without warning, occasionally accompanied by a brief (< 5 seconds) seizure.

Diagnosis of cardiac arrest is by clinical findings of apnea, pulselessness, and unconsciousness. Arterial pressure is not measurable. Pupils dilate and become unreactive to light after several minutes.

The patient is evaluated for potentially treatable causes; a useful memory aid is "Hs and Ts":

If many factors are favorable (eg, VF is witnessed in an intensive care unit or emergency department), 50% of adults with inpatient cardiac arrest may survive to hospital discharge. Overall, survival to hospital discharge in patients experiencing in-hospital arrest varies from 25 to 50%.

Only about 10% of all cardiac arrest survivors have good neurologic function, defined as minimal to moderate cerebral disability with ability to perform the majority of activities of daily living independently, at hospital discharge.

Cardiopulmonary resuscitation ( CPR Cardiopulmonary Resuscitation (CPR) in Adults Cardiopulmonary resuscitation (CPR) is an organized, sequential response to cardiac arrest, including Recognition of absent breathing and circulation Basic life support with chest compressions... read more ) is an organized, sequential response to cardiac arrest; rapid initiation of uninterrupted chest compressions ("push hard and push fast") and early defibrillation of patients who are in VF or VT (more commonly adults) are the keys to success in achieving return of spontaneous circulation (ROSC). Based on recent data, the 2020 AHA guidelines for treatment of cardiac arrest also advise rapid administration of a first dose of epinephrine for patients who have nonshockable rhythms.

In children, who most often have asphyxial causes of cardiac arrest, the presenting rhythm is typically a bradyarrhythmia followed by asystole. However, about 15 to 20% of children (particularly when cardiac arrest has not been preceded by respiratory symptoms) present with VT or VF and thus also require prompt defibrillation. The incidence of VF as the initial recorded rhythm increases in children > 12 years.

Primary causes must be promptly treated. If no treatable conditions are present but cardiac motion is detected or pulses are detected by Doppler, severe circulatory shock is identified, and IV fluid (eg, 1 L 0.9% saline, whole blood, or a combination for blood loss) is given. If response to IV fluid is inadequate, most clinicians give one or more vasopressor drugs (eg, norepinephrine, epinephrine, dopamine, vasopressin); however, there is no firm proof that ongoing vasopressor administration during cardiac arrest improves survival.

In addition to treatment of cause, postresuscitative care typically includes methods to optimize oxygen delivery, rapid coronary angiography in patients with suspected cardiac etiology, and targeted temperature management (32 to 36° C in adults) and therapeutic normothermia (36 to 37.5° C in children and infants–– 1, 2 Treatment references Cardiac arrest is the cessation of cardiac mechanical activity resulting in the absence of circulating blood flow. Cardiac arrest stops blood from flowing to vital organs, depriving them of... read more ).