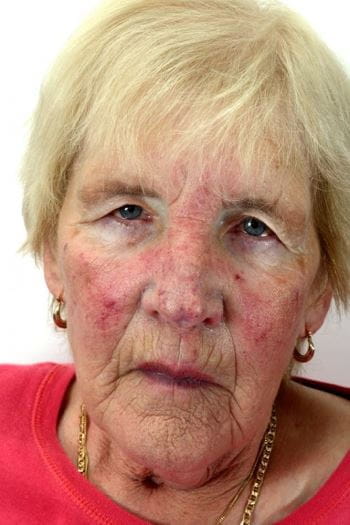 Carcinoid Syndrome (Facial Flushing)
Carcinoid tumors are noncancerous (benign) or cancerous (malignant) growths that sometimes produce excessive amounts of hormone-like substances (such as serotonin), resulting in the carcinoid syndrome. Carcinoid syndrome is a group of specific symptoms that occur as a result of these hormones.

Carcinoid tumors can produce an excess of hormone-like substances, such as serotonin, bradykinin, histamine, and prostaglandins. Excess levels of these substances can sometimes result in a diverse set of symptoms called carcinoid syndrome. Carcinoid tumors use the amino acid tryptophan to produce the excess serotonin. Because tryptophan is normally used by the body to make niacin (vitamin B3), people may rarely develop a niacin deficiency Niacin Deficiency Niacin deficiency (causing pellagra) is uncommon in developed countries. Many people with niacin deficiency also have deficiencies of protein, riboflavin (a B vitamin), and vitamin B6. A distinctive... read more

, which can cause the disease pellagra.

If the tumors have spread to the liver, the liver is unable to process the substances before they begin circulating throughout the body. Depending on which substances are being released by the tumors, the person will have the various symptoms of carcinoid syndrome. Carcinoid tumors of the lungs, testes, and ovaries also cause symptoms because the substances they produce bypass the liver and circulate widely in the bloodstream.

People with carcinoid tumors can develop symptoms due to the growth of the tumor, similar to symptoms of other intestinal tumors. These symptoms are mainly cramping pain and changes in bowel movements as a result of the tumor blocking the intestine.

Fewer than 10% of people with carcinoid tumors develop symptoms of carcinoid syndrome, although this percentage varies depending on where the tumor is located.

The most common, and often earliest symptom of carcinoid syndrome is

Flushing, the result of blood vessel widening (dilation), can be triggered by emotions, by eating, or by drinking alcohol or hot liquids. The flushing may cause the skin to have color changes ranging from red to violet to purple.

Heart damage may occur, which can result in symptoms of right heart failure Heart Failure (HF) Heart failure is a disorder in which the heart is unable to keep up with the demands of the body, leading to reduced blood flow, back-up (congestion) of blood in the veins and lungs, and/or... read more

such as swelling of the feet and legs (edema).

Wheezing and shortness of breath may result from blockage of airflow in the lungs.

When symptoms lead a doctor to suspect a carcinoid tumor, the diagnosis can often be confirmed by measuring the amount of 5-hydroxyindoleacetic acid (5-HIAA)—one of the chemical byproducts of serotonin—in the person’s urine, which is collected over a 24-hour period. For at least 3 days before undergoing this test, the person refrains from eating foods that are rich in serotonin—bananas, tomatoes, plums, avocados, pineapples, eggplants, and walnuts.

Certain drugs, including guaifenesin (found in many cough syrups), methocarbamol (a muscle relaxant), and phenothiazines (antipsychotics), also interfere with test results. People who are taking any drugs, particularly one of these, should discuss with their doctor before collecting urine for this test.

(MRI), and x-rays taken after a radiopaque contrast agent (which is visible on x-rays) is injected into an artery (angiography Angiography In angiography, x-rays are used to produce detailed images of blood vessels. It is sometimes called conventional angiography to distinguish it from computed tomography (CT) angiography and magnetic... read more ). Sometimes exploratory surgery is needed to locate the tumor.

Radionuclide imaging Radionuclide Scanning In radionuclide scanning, radionuclides are used to produce images. A radionuclide is a radioactive form of an element, which means it is an unstable atom that becomes more stable by releasing... read more or scanning is another useful test. During this test, a substance containing a radioactive tracer is injected intravenously into the body and collects in a particular organ. Most carcinoid tumors have receptors for the hormone somatostatin. Doctors can therefore inject a radioactive form of somatostatin or a related substance into the blood and use radionuclide imaging to locate a carcinoid tumor and determine whether it has spread. About 90% of tumors can be located using this technique. MRI or CT can be helpful in confirming whether the tumor has spread to the liver.

Other causes of flushing, such as menopause Menopause Menopause is the permanent end of menstrual periods and thus of fertility. For up to several years before and just after menopause, estrogen levels fluctuate widely, periods become irregular... read more

or alcohol ingestion, need to be excluded. This can usually be done by asking the person questions (such as their age and about their alcohol use), but sometimes testing is necessary.

When a carcinoid tumor is restricted to a specific area, such as the appendix, small intestine, rectum, or lungs, surgical removal may cure the disease. If the tumor has spread to the liver, surgery rarely cures the disease but may help relieve symptoms. Other treatments, such as embolization, in which substances are injected into the tumor through blood vessels in the liver, also can help liver tumors. Carcinoid tumors grow so slowly that even people whose tumors have spread often survive for 10 to 15 years. Several newer drugs such as everolimus also may be helpful.

Neither radiation therapy nor chemotherapy is effective in curing carcinoid tumors. However, combinations of certain chemotherapy drugs (streptozocin with fluorouracil and cyclophosphamide) may temporarily relieve symptoms when the tumor has spread to the liver.

The drugs octreotide and lanreotide can relieve flushing symptoms. Some forms of these drugs can be given only once a month. Other treatments for flushing include phenothiazines (such as prochlorperazine) and histamine-blocking drugs such as famotidine. Rarely, phentolamine is used to control flushing in people with carcinoid syndrome. Prednisone is sometimes given to people with carcinoid tumors of the lungs who have episodes of severe flushing.

Diarrhea may be controlled with loperamide, codeine, tincture of opium, diphenoxylate, or cyproheptadine.

Pellagra may be prevented by ensuring adequate protein in the diet and by taking niacin. Drugs that block the production of serotonin, such as methyldopa, also help prevent pellagra.

Overview of Cholesterol and Lipid Disorders
Others also read