) throughout the body. The cause of Kawasaki disease is unknown, but evidence suggests a virus or other infectious organism triggers an abnormal immune system response in genetically predisposed children. Inflammation of blood vessels in the heart causes the most serious problems. The inflammation also can spread to other parts of the body such as the pancreas and kidneys.

The illness begins with fever that is usually above 102.2° F (39° C) and that rises and falls over 1 to 3 weeks. The child's temperature does not return to normal unless drugs that lower the temperature (such as acetaminophen and ibuprofen) are given.

Within a day or two, the eyes become red but do not have any discharge. Within 5 days, a red, often patchy rash usually appears over the trunk, around the diaper area, and on mucous membranes, such as the lining of the mouth or vagina. The rash may look like hives Hives Hives are red, itchy, slightly elevated swellings. The swelling is caused by the release of chemicals (such as histamine) from mast cells in the skin, which cause fluid to leak out of small... read more

or may look like the rash caused by measles Measles Measles is a highly contagious viral infection that causes various cold-like symptoms and a characteristic rash. Measles is caused by a virus. Symptoms include fever, runny nose, hacking cough... read more

or scarlet fever Symptoms Streptococcal infections are caused by any one of several species of Streptococcus. These gram-positive, sphere-shaped (coccal) bacteria (see figure How Bacteria Shape Up) cause many... read more . The child has a red throat; reddened, dry, cracked lips; and a red tongue that looks somewhat like a strawberry. Also, the palms and soles turn red or purplish red, and the hands and feet often swell. The skin on the fingers and toes begins to peel about 10 days after the illness starts. The lymph nodes in the neck are often swollen and slightly tender. The illness may last from 2 to 12 weeks or longer.

If children are not treated, up to 1 in 4 develop heart problems, usually beginning 1 to 4 weeks after the illness starts. A few of these children develop the most serious heart problem, a bulge in the wall of a coronary artery (coronary artery aneurysm Overview of Aortic Aneurysms and Aortic Dissection The aorta, which is about 1 inch (2.5 centimeters) in diameter, is the largest artery of the body. It receives oxygen-rich blood from the left ventricle of the heart and distributes it to all... read more ). These aneurysms can rupture or provoke a blood clot, leading to a heart attack and sudden death. Treatment reduces the risk of heart complications to about 1 in 20.

How Do Doctors Diagnose Kawasaki Disease?

Blood tests and cultures of the blood and throat are also done to rule out other disorders that cause similar symptoms (such as measles, scarlet fever, and juvenile idiopathic arthritis).

) to look for coronary artery aneurysms, leaking heart valves, inflammation of the sac that surrounds the heart (pericarditis Overview of Pericardial Disease Pericardial disease affects the pericardium, which is the flexible two-layered sac that envelops the heart. The pericardium helps keep the heart in position, helps prevent the heart from overfilling... read more 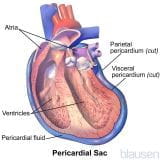 ), or inflammation of the heart muscle (myocarditis Myocarditis Myocarditis is inflammation of the muscle tissue of the heart (myocardium) that causes tissue death. Myocarditis may be caused by many disorders, including infection, toxins and drugs that affect... read more ). Sometimes abnormalities do not appear right away, so these tests are repeated 2 to 3 weeks, 6 to 8 weeks, and perhaps 6 to 12 months after symptoms began. If ECG or echocardiography tests are abnormal, doctors may do a stress test Stress Testing Stressing the heart (by exercise or by use of stimulant drugs to make the heart beat faster and more forcibly) can help identify coronary artery disease. In coronary artery disease, blood flow... read more

With treatment, children recover completely if their coronary arteries are not affected within the first 8 weeks of illness. For children with coronary artery problems, the outcome varies with the severity of the disease. However, with early treatment, almost no children with Kawasaki disease in the United States die.

Without treatment, the death rate is about 1%. Of the children who die, death nearly always occurs in the first 6 months but can occur as long as 10 years later.

Treatment for Kawasaki disease is started as soon as possible. Treatment given within the first 10 days of symptoms significantly reduces the risk of coronary artery damage and speeds the resolution of fever, rash, and discomfort. For 1 to 4 days, high doses of immune globulin are given by vein, and high doses of aspirin are given by mouth. As soon as the child has no fever for 4 to 5 days, the dose of aspirin is lowered but still given for at least 8 weeks from the beginning of illness. If there are no coronary artery aneurysms and signs of inflammation are gone, aspirin may be stopped. However, children with coronary artery abnormalities require long-term treatment with aspirin.

Because aspirin use increases the risk of Reye syndrome Reye Syndrome Reye syndrome is a very rare but life-threatening disorder that causes inflammation and swelling of the brain and impairment and loss of function of the liver. The cause of Reye syndrome is... read more in children who have influenza or chickenpox, doctors make sure to give children on long-term aspirin therapy the recommended annual influenza vaccination Influenza Vaccine The influenza virus vaccine helps protect against influenza. Two types of influenza virus, type A and type B, regularly cause seasonal epidemics of influenza in the United States. There are... read more . All children should also receive the varicella (chickenpox) vaccine Varicella Vaccine The varicella vaccine helps protect against chickenpox (varicella), a very contagious infection caused by the varicella-zoster virus. It causes an itchy rash that looks like small blisters with... read more at the appropriate ages. If children are exposed to or contract influenza or chickenpox, dipyridamole is sometimes temporarily used instead of aspirin to lessen the risk of Reye syndrome.

Children with large coronary aneurysms may be treated with drugs that prevent the blood from clotting (anticoagulants).