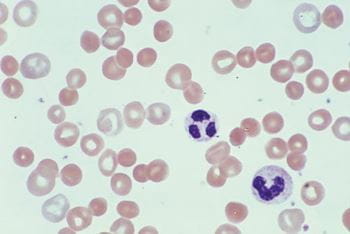 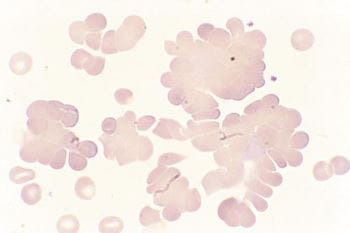 Drugs That Can Cause Warm Antibody Hemolytic Anemia
Autoimmune hemolytic anemia is caused by autoantibodies that react with red blood cells at temperatures ≥ 37° C (warm antibody hemolytic anemia) or < 37° C (cold agglutinin disease). Hemolysis is usually extravascular. The direct antiglobulin (direct Coombs) test establishes the diagnosis and may suggest the cause. Treatment depends on the cause and may include corticosteroids, splenectomy, IV immune globulin, immunosuppressants, avoidance of blood transfusions (except in cases of life-threatening anemia), avoidance of triggers (eg, cold), and withdrawal of drugs.

) stimulate production of autoantibodies against Rh antigens (alpha-methyldopa-type of autoimmune hemolytic anemia). Other drugs stimulate production of autoantibodies against the antibiotic–RBC-membrane complex as part of a transient hapten mechanism; the hapten may be stable (eg, high-dose penicillin, cephalosporins) or unstable (eg, quinidine, sulfonamides).

Infections tend to cause acute disease, whereas idiopathic disease (the common form in older adults) tends to be chronic. The hemolysis occurs largely in the extravascular mononuclear phagocyte system of the liver and spleen. The anemia is usually mild (hemoglobin > 7.5 g/dL [70.5 g/L]). Autoantibodies in cold agglutinin disease are usually IgM. Antibody thermal amplitude is more important than its titer; the higher the temperature (ie, the closer to normal body temperature) at which these antibodies react with the RBC, the greater the hemolysis.

Paroxysmal cold hemoglobinuria (PCH; Donath-Landsteiner syndrome) is a rare type of cold agglutinin disease. PCH is more common in children. Hemolysis results from exposure to cold, which may even be localized (eg, from drinking cold water, from washing hands in cold water). An IgG antibody binds to the P antigen on RBCs at low temperatures and causes intravascular hemolysis and hemoglobinuria after warming. It occurs most often after a nonspecific viral illness or in otherwise healthy patients, although it occurs in some patients with congenital or acquired syphilis Syphilis Syphilis is caused by the spirochete Treponema pallidum and is characterized by 3 sequential clinical, symptomatic stages separated by periods of asymptomatic latent infection. Common... read more

. The severity and rapidity of development of the anemia varies and may be fulminant. In children, this disease is often self-resolving.

Symptoms of warm antibody hemolytic anemia tend to be due to the anemia. If the disorder is severe, fever, chest pain, syncope, or liver or heart failure may occur. Mild splenomegaly is typical.

Cold agglutinin disease manifests as an acute or chronic hemolytic anemia. Other cryopathic symptoms or signs may be present (eg, acrocyanoses, Raynaud syndrome Raynaud Syndrome Raynaud syndrome is vasospasm of parts of the hand in response to cold or emotional stress, causing reversible discomfort and color changes (pallor, cyanosis, erythema, or a combination) in... read more

Symptoms of PCH may include severe pain in the back and legs, headache, vomiting, diarrhea, and passage of dark brown urine; hepatosplenomegaly may be present.

Autoimmune hemolytic anemia is diagnosed by detection of autoantibodies with the direct antiglobulin (direct Coombs) test. Antiglobulin serum is added to washed RBCs from the patient; agglutination indicates the presence of immunoglobulin or complement (C) bound to the RBCs. In warm antibody hemolytic anemia, IgG is nearly always present, and C3 (C3b and C3d) may be present as well. In cold antibody disease, C3 is present while IgG is usually absent. The test is ≥ 98% sensitive for autoimmune hemolytic anemia; false-negative results can occur if antibody density is very low or, rarely, if the autoantibodies are IgA or IgM. In most cases of warm antibody hemolytic anemia, the antibody is an IgG identified only as a panagglutinin, meaning the antigen specificity of the antibody can not be determined. In cold antibody disease, the antibody is usually an IgM directed against the I/i carbohydrate on the RBC surface. Antibody titers can usually be determined but do not always correlate with disease activity. The direct antiglobulin (direct Coombs) test may be positive in the absence of autoimmune hemolytic anemia, and thus should be ordered only in the proper clinical setting. A false-positive direct antiglobulin test may result from the presence of clinically insignificant antibodies.

The indirect antiglobulin (indirect Coombs) test is a complementary test that consists of mixing the patient’s plasma with normal RBCs to determine whether such antibodies are free in the plasma. A positive indirect antiglobulin test and a negative direct test generally indicate an alloantibody caused by pregnancy, prior transfusions, or lectin cross-reactivity rather than immune hemolysis. Even identification of a warm antibody does not define hemolysis, because 1/10,000 healthy blood donors has a positive test result.

If paroxysmal cold hemoglobinuria (PCH) is suspected, the Donath-Landsteiner test, which is specific for PCH, should be done. In this test, the patient's serum is incubated with normal RBCs at 4° C for 30 minutes to allow for fixation of complement and then warmed to body temperature. Hemolysis of the RBCs during this test is indicative of PCH. Because the PCH antibody fixes complement at low temperatures, the direct antiglobulin (direct Coombs) test is positive for C3 and negative for IgG. However, the antibody in PCH is an IgG against the P antigen.

Blood transfusion is the most important treatment for symptomatic patients who rapidly develop severe, life-threatening anemia. In this situation, transfusion should never be withheld due to lack of "compatible" units. In general, patients who have not had a previous blood transfusion or been pregnant are at low risk for hemolysis of ABO-compatible blood. Even if transfused cells are hemolyzed, blood transfusion can be life-saving until more definitive therapy can be done.

Treatment depends on the specific mechanism of the hemolysis.

In drug-induced warm antibody hemolytic anemias, drug withdrawal decreases the rate of hemolysis. With alpha-methyldopa-type AIHA, hemolysis usually ceases within 3 weeks; however, a positive antiglobulin test may persist for > 1 year. With hapten-mediated AIHA, hemolysis ceases when the drug is cleared from the plasma. Corticosteroids and/or infusions of immune globulin may be used as second-line therapies.

Other treatments include use of additional immunosuppressive drugs and/or splenectomy. About one third to one half of patients have a sustained response after splenectomy.

In cases of fulminant hemolysis, immunosuppression with high-dose pulse corticosteroids or cyclophosphamide can be used. For less severe but uncontrolled hemolysis, immune globulin infusions have provided temporary control.

Long-term management with immunosuppressants (including cyclosporine) has been effective in patients in whom corticosteroids and splenectomy have been ineffective.

The presence of panagglutinating antibodies in warm antibody hemolytic anemia makes cross-matching of donor blood difficult. In addition, transfusions could superimpose an alloantibody on the autoantibody, accelerating hemolysis. Thus, transfusions should be avoided when anemia is not life-threatening but should not be withheld in patients with severe autoimmune hemolytic anemia, particularly when the reticulocyte count is low.

In many cases, avoidance of cold environments and other triggers of hemolysis may be all that is needed to prevent symptomatic anemia.

In severe cases, plasmapheresis Plasmapheresis Apheresis refers to the process of separating the cellular and soluble components of blood using a machine. Apheresis is often done on donors where whole blood is centrifuged to obtain individual... read more is an effective temporary treatment. Transfusions should be given sparingly, with the blood warmed through an on-line warmer.

Splenectomy is usually of no value, and immunosuppressants have only modest effectiveness.

In paroxysmal cold hemoglobinuria (PCH), therapy consists of strict avoidance of exposure to cold. Immunosuppressants have been effective, but use should be restricted to patients with progressive or idiopathic cases.

Splenectomy is of no value.

Merck & Co., Inc., Rahway, NJ, USA (known as MSD outside of the US and Canada) is a global healthcare leader working to help the world be well. From developing new therapies that treat and prevent disease to helping people in need, we are committed to improving health and well-being around the world.  The Manual was first published in 1899 as a service to the community. The legacy of this great resource continues as the MSD Manual outside of the United States and Canada. Learn more about our commitment to Global Medical Knowledge.