Abdominal abscesses may form below the diaphragm, in the middle of the abdomen, in the pelvis, or behind the abdominal cavity. Abscesses also may form in or around any abdominal organ, such as the kidneys, spleen, pancreas, or liver, or in the prostate gland. Untreated abscesses can grow and damage nearby blood vessels and organs. Sometimes, bacteria enter the bloodstream (sepsis Sepsis and Septic Shock Sepsis is a serious bodywide response to bacteremia or another infection plus malfunction or failure of an essential system in the body. Septic shock is life-threatening low blood pressure ... read more ) and spread to distant organs and tissues. Such spread can be fatal. 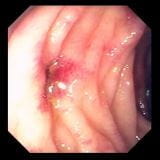 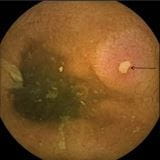 Sometimes, abdominal abscesses are caused by perforation of the intestine Perforation of the Digestive Tract Any of the hollow digestive organs may become perforated (punctured), which causes a release of gastrointestinal contents and can lead to sepsis (a life-threatening infection of the bloodstream)... read more due to cancer, ulcer, or injury, and sometimes abscesses form after injury to the abdomen or after surgery on the abdomen.

Specific symptoms of abdominal abscesses depend on the location of the abscess, but most people have constant discomfort or pain, feel generally sick (malaise), and often have a fever. Other symptoms include nausea, loss of appetite, and weight loss.

An abscess below the diaphragm may form when infected fluid, for example, from a ruptured appendix, is moved upward by the pressure of abdominal organs and by the suction created when the diaphragm moves during breathing. Symptoms may include a cough, painful breathing, chest pain, and pain in one shoulder. In this instance, the pain felt in one shoulder is an example of referred pain (pain felt in one area of the body that does not accurately represent where the problem is). Referred pain occurs because the shoulder and the diaphragm share the same nerves, and the brain incorrectly interprets the source of the pain ( see Figure: What Is Referred Pain? What Is Referred Pain?

An abscess in the lower abdomen may track down into the thigh or the area around the rectum (called the perirectal fossa).

Pelvic abscesses can result from the same disorders that cause abscesses in the mid-abdomen or from gynecologic infections. Symptoms may include abdominal pain, diarrhea caused by intestinal irritation, and an urgent or frequent need to urinate caused by bladder irritation.

Abscesses behind the abdominal cavity (called retroperitoneal abscesses) lie behind the peritoneum, the membrane that lines the abdominal cavity and organs. The causes, which are similar to those of abscesses in the abdomen, include inflammation and infection of the appendix (appendicitis Appendicitis Appendicitis is inflammation and infection of the appendix. Often a blockage inside the appendix causes the appendix to become inflamed and infected. Abdominal pain, nausea, and fever are common... read more ) and of the pancreas (pancreatitis Overview of Pancreatitis Pancreatitis is inflammation of the pancreas. The pancreas is a leaf-shaped organ about 5 inches (about 13 centimeters) long. It is surrounded by the lower edge of the stomach and the first... read more ). Pain, usually in the lower back, worsens when the person moves the leg at the hip.

Liver abscesses may be caused by bacteria or by amebas (single-celled parasites). Bacteria can reach the liver from an infected gallbladder, a penetrating or blunt wound, an infection in the abdomen (such as a nearby abscess), or an infection carried by the bloodstream from elsewhere in the body. Amebas Amebiasis Amebiasis is an infection of the large intestine and sometimes the liver and other organs that is caused by the single-celled protozoan parasite Entamoeba histolytica, an ameba. The amebas... read more (microscopic parasites) from an intestinal infection reach the liver through the blood vessels. Symptoms of liver abscesses include loss of appetite, nausea, and a fever. A person may or may not have abdominal pain.

Doctors can easily misdiagnose an abscess, because the first symptoms it causes are usually vague and mild and may be mistaken for less serious problems that are more common.

If doctors suspect a person has an abscess, they usually do computed tomography Computed Tomography and Magnetic Resonance Imaging of the Digestive Tract Computed tomography (CT— see also Computed Tomography (CT)) and magnetic resonance imaging (MRI— see also Magnetic Resonance Imaging (MRI)) scans are good tools for assessing the size and location... read more (CT) of the abdomen and pelvis or sometimes ultrasound scanning Ultrasound Scanning (Ultrasonography) of the Abdomen Ultrasound scanning uses sound waves to produce pictures of internal organs ( see also Ultrasonography). An ultrasound scan can show the size and shape of many organs, such as the liver and... read more

(ultrasonography), x-rays Plain X-Rays X-rays are high-energy radiation waves that can penetrate most substances (to varying degrees). In very low doses, x-rays are used to produce images that help doctors diagnose disease. In high... read more of the abdomen and chest, or magnetic resonance imaging Computed Tomography and Magnetic Resonance Imaging of the Digestive Tract Computed tomography (CT— see also Computed Tomography (CT)) and magnetic resonance imaging (MRI— see also Magnetic Resonance Imaging (MRI)) scans are good tools for assessing the size and location... read more (MRI). These tests can help distinguish an abscess from other problems, as well as determine the source, size, and position of an abscess.

To make a definitive diagnosis and treat the abscess, doctors sometimes insert a needle through the skin to draw a sample of pus from the abscess (needle aspiration) and place a drain. To guide the placement of the needle, doctors use CT or ultrasound scanning. The sample of fluid is then examined in a laboratory to identify the infecting organism so that the most effective antibiotic can be selected.

Abdominal abscesses can cause death in about 10 to 40% of people. What caused the abscess and a person's general medical condition affect the prognosis more than the specific nature and location of the abscess.

Antibiotics are usually used in addition to drainage to prevent the infection from spreading and to help completely eliminate the infection. Laboratory analysis of the pus identifies the infecting organism so that the most effective antibiotic can be selected. It is uncommon for antibiotics to cure an abscess without drainage.

If the abscess cannot be reached safely by the needle and catheter, surgical drainage may be necessary. Once the abscess has been drained, the source of the infection is also surgically treated. For example, if the abscess is caused by a perforation (hole) in the colon, doctors usually remove that part of the colon.