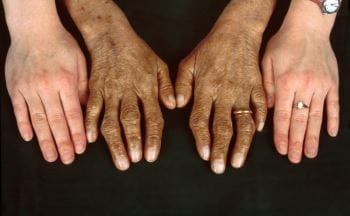 Transferrin and Iron-Binding Capacity (TIBC, UIBC)
Hemochromatosis is a hereditary disorder that causes the body to absorb too much iron, causing iron to build up in the body and damage organs.

In the United States, over 1 million people have hemochromatosis. Men are affected more often than women. The disorder is potentially fatal but is usually treatable. (See also Overview of Iron Overload Overview of Iron Overload Iron is essential for life, so the body usually tightly controls iron absorption from food and recycles the iron from red blood cells. People lose small amounts of iron every day, and even a... read more .)

Hemochromatosis is hereditary. It can be caused by several different genetic mutations.

The most common mutation causes

Type 1 hemochromatosis involves mutation of the HFE (homeostatic iron regulator) gene. It occurs in people of Northern European background. The person must inherit a mutated gene from both parents to be affected. The HFE gene makes a protein that senses the amount of iron in the body. A mutation in the gene allows too much iron to be absorbed from the diet.

Other mutations cause similar disorders

TFR2 mutations impair the body's ability to control iron absorption into certain cells. Although the types of hemochromatosis vary in age at which they appear, the symptoms and complications of iron overload are the same in all.

Usually, symptoms develop gradually, and the disorder may not be noticed until iron accumulation is excessive. Often no symptoms appear until middle age or later. Sometimes the first symptoms are vague, such as fatigue or weakness, and may not be noticed or may be attributed to some other disorder. In women, symptoms usually start after menopause because of the loss of iron during menstrual bleeding and the increased requirement for iron during pregnancy.

Symptoms vary because iron accumulation can damage any part of the body, including the brain, liver, pancreas, lungs, or heart. The first symptoms, particularly in men, may be those of cirrhosis Symptoms Cirrhosis is the widespread distortion of the liver's internal structure that occurs when a large amount of normal liver tissue is permanently replaced with nonfunctioning scar tissue. The scar... read more

(due to liver damage) or those of diabetes Symptoms Diabetes mellitus is a disorder in which the body does not produce enough or respond normally to insulin, causing blood sugar (glucose) levels to be abnormally high. Urination and thirst are... read more (due to pancreas damage). Or, the first symptoms, particularly in women, may be vague and affect the whole body. Fatigue is an example. Liver disease is the most common problem. The following problems can also occur:

Hemochromatosis can worsen neurologic disorders that are already present.

Identifying hemochromatosis based on symptoms may be difficult. However, blood tests can identify people who should have further evaluation. These tests measure blood levels of

If the ferritin level and the percentage of iron in transferrin (transferrin saturation) are high, genetic testing is usually done to confirm the diagnosis. A liver biopsy Biopsy of the Liver Doctors can obtain a sample of liver tissue during exploratory surgery, but more often they obtain a sample by inserting a hollow needle through the person's skin and into the liver. This type... read more and/or magnetic resonance imaging (MRI) of the liver may be necessary to determine whether the liver has been damaged.

Genetic testing is recommended for people with hemochromatosis, and all of their first-degree relatives (siblings, parents, and children) should be screened for hemochromatosis by measuring their iron levels.

Usually, removing blood (phlebotomy) is the best treatment. It prevents additional organ damage but does not reverse existing damage. Phlebotomy is initially done once or sometimes twice a week. Each time, about 500 milliliters (1 pint or 1 unit) of blood is removed until the iron level and percentage of iron in transferrin are normal. Phlebotomy is then done periodically to keep iron stores at normal levels.

People should be treated if they have diabetes Symptoms Diabetes mellitus is a disorder in which the body does not produce enough or respond normally to insulin, causing blood sugar (glucose) levels to be abnormally high. Urination and thirst are... read more , heart failure Heart Failure (HF) Heart failure is a disorder in which the heart is unable to keep up with the demands of the body, leading to reduced blood flow, back-up (congestion) of blood in the veins and lungs, and/or... read more

, erectile dysfunction, Erectile Dysfunction (ED) Erectile dysfunction (ED) is the inability to attain or sustain an erection satisfactory for sexual intercourse. (See also Overview of Sexual Dysfunction in Men.) Every man occasionally has... read more or other complications. People with cirrhosis should have a liver ultrasound every 6 months to screen for liver cancer Overview of Liver Tumors Liver tumors may be noncancerous (benign) or cancerous (malignant). Cancerous liver tumors are classified as primary (originating in the liver) or metastatic (spreading from elsewhere in the... read more .

People can eat a normal, healthy diet, including iron-containing foods. Doctors may tell people to limit alcohol consumption because alcohol can increase iron absorption and also increases the risk of cirrhosis Symptoms Cirrhosis is the widespread distortion of the liver's internal structure that occurs when a large amount of normal liver tissue is permanently replaced with nonfunctioning scar tissue. The scar... read more

With early diagnosis and treatment of hemochromatosis, a long, healthy life is expected.