Gingivitis Due to Plaque

Gingivitis Not Due to Plaque 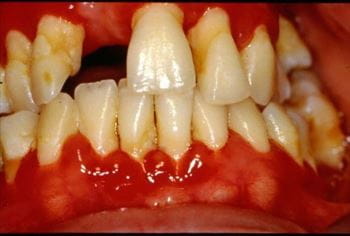 Gingivitis
Gingivitis is mild form of periodontal disease characterized by inflammation of the gums (gingivae).

Gingivitis is an extremely common disease in which the gums become red and swollen and bleed easily. Gingivitis causes little pain in its early stages and thus may not be noticed. However, gingivitis that is left untreated may progress to periodontitis Periodontitis Periodontitis is a severe form of gingivitis, in which the inflammation of the gums extends to the supporting structures of the tooth. Plaque and tartar build up between the teeth and gums and... read more

, a more severe gum disease that can result in tooth loss.

Gingivitis is divided into two categories:

Gingivitis Due to Plaque

Almost all gingivitis is due to dental plaque Common tooth disorders include Cavities (caused by tooth decay) Pulpitis Periapical abscess Impacted teeth read more , which is a filmlike substance made up primarily of bacteria, saliva, food debris, and dead cells that is continually being deposited on teeth. Tartar is hardened plaque. By far, the most common cause is

Without adequate brushing, plaque remains along the gumline and builds up between the gums and the teeth (gingivitis does not occur in places where teeth are missing). Plaque also accumulates in faulty fillings and around the teeth next to poorly cleaned partial dentures, bridges, and orthodontic appliances. When plaque stays on the teeth for more than 72 hours, it can harden into tartar Common tooth disorders include Cavities (caused by tooth decay) Pulpitis Periapical abscess Impacted teeth read more (calculus), which cannot be completely removed by brushing and flossing.

Plaque irritates the gums and creates pockets between the teeth and gums. Bacteria living in these pockets may cause gingivitis as well as cavities Cavities Cavities are decayed areas in the teeth, the result of a process that gradually dissolves a tooth’s hard outer surface (enamel) and progresses toward the interior. (See also Overview of Tooth... read more

in the roots of the teeth. The gums appear red rather than a healthy pink. They swell and become movable instead of being firm and tight against the teeth. The gums may bleed easily, especially while brushing or eating. People usually do not have pain.

Gingivitis due to plaque can be prevented with good oral hygiene—the daily use of a toothbrush and dental floss. Some mouthwashes also help control plaque. After tartar forms, it can be removed only by a dentist or dental hygienist. People typically need professional cleanings (called scaling and prophylaxis) every 6 to 12 months. However, people with poor oral hygiene, medical conditions that can lead to gingivitis, or a tendency to develop plaque more quickly than usual may need professional cleanings more often. Because of their excellent blood supply, gums quickly become healthy again after tartar and plaque are removed, as long as people brush and floss carefully.

In addition to poor oral hygiene, gingivitis due to plaque may also be started or worsened by

Gingivitis due to drugs

Some drugs can cause an overgrowth (hyperplasia) of gum tissue, so that removing plaque becomes more difficult, and gingivitis often develops. Phenytoin (taken to control seizures), cyclosporine (taken by people who have had organ transplants), and calcium channel blockers such as nifedipine (taken to control blood pressure and heart rhythm abnormalities) can cause such an overgrowth. Also, oral or injectable contraceptives can aggravate gingivitis, as can exposure to lead or bismuth (which is used extensively in cosmetics) or to other heavy metals such as nickel (used in jewelry).

Medical conditions that might cause or worsen gingivitis should be treated or controlled. If people must take a drug that causes gum tissue overgrowth, the excess gum tissue may need to be removed surgically. However, meticulous oral hygiene at home and frequent cleanings by a dentist or dental hygienist may slow the rate of tissue growth and eliminate the need for surgery.

Gingivitis due to vitamin deficiency

Vitamin deficiencies, in rare cases, can cause gingivitis. Vitamin C deficiency Vitamin C Deficiency In developed countries, vitamin C deficiency can occur from a diet low in vitamin C, but severe deficiency (causing scurvy) is uncommon. Not eating enough fresh fruits and vegetables can cause... read more (scurvy) can lead to inflamed, bleeding gums (see Periodontitis Periodontitis Periodontitis is a severe form of gingivitis, in which the inflammation of the gums extends to the supporting structures of the tooth. Plaque and tartar build up between the teeth and gums and... read more

). Red or purple dots and bruises may appear in the mouth.

) also causes inflamed, bleeding gums and a predisposition to certain mouth infections, such as thrush Candidiasis Candidiasis is a fungal infection caused by several species of the yeast Candida, especially Candida albicans. The most common type of candidiasis is a superficial infection of the mouth, vagina... read more

, or to inflammation of the tongue (glossitis). Additionally, the lips are red and cracked, the tongue is smooth and bright red, and the tongue and lining of the mouth may have sores.

These deficiencies are rare in the United States.

Gingivitis due to hormone changes

Pregnancy can worsen mild gingivitis, primarily because of hormonal changes. Some pregnant women may unknowingly contribute to the problem by neglecting oral hygiene because they feel nauseated in the morning (morning sickness) and fatigued. Also during pregnancy, a minor irritation, often the buildup of tartar or a restored tooth with a rough edge, may cause a soft, reddish, lumplike overgrowth of gum tissue, called a pregnancy tumor (pyogenic granuloma Pyogenic Granulomas Pyogenic granulomas are fleshy, moist or crusty, and red or reddish brown slightly raised bumps caused by an increased growth of capillaries (the smallest blood vessels) and swelling of the... read more

). The bloated tissue bleeds easily if injured and may interfere with eating.

If pregnant women are neglecting oral hygiene because of morning sickness and/or fatigue, dentists can suggest ways to keep the teeth and gums clean without making the nausea worse. Gentle brushing without toothpaste, or even salt water rinses after brushing, can help. A bothersome pregnancy tumor can be surgically removed. However, such tumors tend to recur until, and even after, the pregnancy ends.

Menopause can cause desquamative gingivitis, a poorly understood, painful condition that occurs most commonly in postmenopausal women. In this condition, the outer layers of the gums bleed easily and separate from the underlying tissue (desquamate), exposing nerve endings. The outer layers of the gum tissues can be rubbed away with a cotton swab or blown off with a dentist’s air syringe.

If desquamative gingivitis develops during menopause, hormone replacement therapy may help. Otherwise, dentists may prescribe a corticosteroid rinse or a corticosteroid paste that is applied directly to the inflamed areas.

Gingivitis due to leukemia

Leukemia Leukemias read more can cause gingivitis. In fact, gingivitis is the first sign of disease in about 25% of children with leukemia. An infiltration of leukemia cells into the gums causes the gingivitis, and a reduced ability to fight infections worsens it. The gums become swollen, painful, and red and bleed easily. Often, the bleeding continues for several minutes or more because blood does not clot normally in people with leukemia. Less commonly, cancer can form in the gum tissue Mouth and Throat Cancer Mouth and throat cancers are cancers that originate on the lips, the roof, sides, or floor of the mouth, tongue, tonsils, or back of the throat. Mouth and throat cancers may look like open sores... read more

A person with gingivitis due to leukemia can prevent bleeding by gently wiping the teeth and gums with a gauze pad or sponge instead of brushing and flossing. Dentists can prescribe a chlorhexidine mouth rinse to control plaque and prevent mouth infections. When the leukemia is in remission (when evidence of the cancer disappears), good dental care can restore the gums to health.

Gingivitis Not Due to Plaque

Gingivitis that is not caused by plaque occurs in a small percentage of people. Causes include infections, allergies, disorders, and injuries.

Gingivitis due to infections

. The infection turns the gums bright red and causes many small white or yellow sores to form inside the mouth.

Acute herpetic gingivostomatitis usually gets better in 2 weeks without treatment. Intensive cleaning does not help, so a person should brush gently while the infection is still painful. Dentists may recommend an anesthetic mouth rinse to relieve discomfort while eating and drinking.

Fungal infections can cause gingivitis as well. Fungi commonly grow in the mouth in very small amounts. Use of antibiotics or a change in overall health can increase the number of fungi in the mouth. Thrush Symptoms Candidiasis is infection with the yeast Candida. Candidiasis tends to occur in moist areas of the skin. Candidiasis may cause rashes, scaling, itching, and swelling. Doctors examine the affected... read more

(candidiasis) is a fungal infection in which the overgrowth of fungi, particularly Candida albicans, forms a white or red patch that irritates the gums. Patches can also coat the tongue and corners of the mouth and leave a bleeding surface if wiped away.

Thrush can be treated with an antifungal drug, such as nystatin, in the form of a mouth rinse or a lozenge designed to dissolve slowly in the mouth. Dentures should be soaked overnight in nystatin solution as well. Good oral hygiene (proper brushing and flossing) and treatment of underlying dental problems, such as ill-fitting dentures, can also help.

Gingivitis due to an impacted tooth (pericoronitis)

Pericoronitis most commonly occurs around wisdom teeth (3rd molars), particularly the lower wisdom teeth. If the upper wisdom tooth emerges before the lower one, it may bite on this flap, increasing the irritation. Infections can develop and spread to the throat or cheek. The flap disappears once the tooth has fully emerged.

When people have pericoronitis, dentists may flush salt water under the flap of gum to rinse out the debris and bacteria. Sometimes, people are instructed to rinse at home with salt water, hydrogen peroxide, or the antiseptic chlorhexidine. If x-rays show that a lower tooth is not likely to emerge completely, dentists may remove the upper tooth and prescribe antibiotics for a few days before removing the lower one. Sometimes dentists remove the lower tooth immediately.