Health Topics & Chapters
IN THIS TOPIC

A parasite is an organism that lives on or inside another organism (the host) and benefits (for example, by getting nutrients) from the host at the host's expense. Although this definition actually applies to many microbes, including bacteria, fungi, and viruses, doctors use the term "parasites" to refer to

Protozoa reproduce by cell division and can multiply inside people. The protozoa include a wide range of single-cell organisms such as Giardia Giardiasis Giardiasis is an infection of the small intestine caused by the single-celled protozoan parasite Giardia. The main symptoms are abdominal cramping and diarrhea. People may have abdominal... read more , which infect the intestine, and malaria Malaria Malaria is infection of red blood cells with one of five species of Plasmodium, a protozoan. Malaria causes fever, chills, sweating, a general feeling of illness (malaise), and sometimes... read more , which travel in the blood stream.

Most worms, in contrast, produce eggs or larvae that develop in the environment before they become capable of infecting people. Development in the environment may involve another animal (an intermediate host). Worms include roundworms, such as hookworms Hookworm Infection Hookworm infection is a roundworm infection of the intestines that can cause an itchy rash, respiratory and gastrointestinal problems, and eventually iron deficiency anemia due to ongoing loss... read more

, and flatworms, such as tapeworms Tapeworm Infection Tapeworm infection of the intestine occurs mainly when people eat raw or undercooked contaminated pork, beef, or freshwater fish or, for the dwarf tapeworm, contaminated food or water. Adult... read more

and flukes Overview of Fluke Infections Flukes are parasitic flatworms. There are many species of fluke. Different species tend to infect different parts of the body. Flukes may infect Blood vessels of digestive or urinary system... read more .

Most parasitic infections are more common in tropical and subtropical areas, and intestinal parasites are often linked to areas with inadequate sanitation. A person who visits such an area can unknowingly acquire a parasitic infection, and a doctor may not readily diagnose the infection when the person returns home. In the United States and other industrialized countries, parasitic infections tend to affect mainly immigrants, international travelers, and people with a weakened immune system Overview of the Immune System The immune system is designed to defend the body against foreign or dangerous invaders. Such invaders include Microorganisms (commonly called germs, such as bacteria, viruses, and fungi) Parasites... read more (such as those who have AIDS Human Immunodeficiency Virus (HIV) Infection Human immunodeficiency virus (HIV) infection is a viral infection that progressively destroys certain white blood cells and can cause acquired immunodeficiency syndrome (AIDS). HIV is transmitted... read more

or who taken drugs that suppress the immune system—called immunosuppressants). Parasitic infections may occur in places with poor sanitation and unhygienic practices (as occurs in some psychiatric hospitals and day care centers).

Some parasites are common in the United States and other industrialized countries. Examples are pinworms Pinworm Infection Pinworm infection is caused by the intestinal roundworm Enterobius vermicularis and usually affects children, but adult members of their households and caregivers, institutionalized people... read more 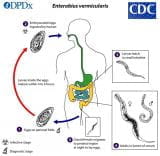 Parasites usually enter the body through the

Parasites that enter through the mouth are swallowed and can remain in the intestine or burrow through the intestinal wall and invade other organs. Often parasites enter the mouth through fecal-oral transmission Fecal-oral transmission of parasites A parasite is an organism that lives on or inside another organism (the host) and benefits (for example, by getting nutrients) from the host at the host's expense. Although this definition actually... read more .

Some parasites can enter directly through the skin. Others are transmitted by insect bites.

Rarely, parasites are spread through blood transfusions, in transplanted organs, through injections with a needle previously used by an infected person, or from a pregnant woman to her fetus.

Some other infectious organisms, such as certain viruses and bacteria, also are transmitted by these same methods.

Fecal-oral transmission is a common way to acquire a parasite. Fecal refers to feces or stool, and oral refers to the mouth, including things taken into the mouth. Infection that is spread through the fecal-oral route is acquired when a person somehow ingests something that is contaminated by feces from an infected person or animal, such as a dog or cat. Many parasites invade or live in people's digestive tract. Thus, parasites or their eggs are often present in people's feces.

Infected people often spread their infection when they do not wash their hands adequately after using the toilet. Because their hands are contaminated, anything they touch afterward may be contaminated with parasites (or with bacteria or viruses that cause digestive tract disorders). If people with contaminated hands touch food—in restaurants, grocery stores, or homes—the food may become contaminated. Then, anyone who eats that food may get the infection.

Ingestion does not have to involve food. For example, if a person with contaminated hands touches an object, such as a restroom door, the door can become contaminated. Other people who touch the contaminated door and then touch their finger to their mouth can be infected through the fecal-oral route.

Some parasites live inside the body and enter through the skin. They may

Some parasites, such as hookworms Hookworm Infection Hookworm infection is a roundworm infection of the intestines that can cause an itchy rash, respiratory and gastrointestinal problems, and eventually iron deficiency anemia due to ongoing loss... read more

, enter through skin on the soles of the feet when a person walks barefoot on contaminated soil. Others, such as schistosomes Schistosomiasis Schistosomiasis is infection caused by certain flatworms (flukes), called schistosomes. People acquire schistosomiasis by swimming or bathing in fresh water that is contaminated with the flukes... read more , which are flukes Overview of Fluke Infections Flukes are parasitic flatworms. There are many species of fluke. Different species tend to infect different parts of the body. Flukes may infect Blood vessels of digestive or urinary system... read more , enter through the skin when a person swims or bathes in water containing the parasites.

Insects that carry and transmit organisms that cause disease are called vectors. Some insect vectors transmit parasites called protozoa (such as those that cause malaria Malaria Malaria is infection of red blood cells with one of five species of Plasmodium, a protozoan. Malaria causes fever, chills, sweating, a general feeling of illness (malaise), and sometimes... read more ) and some helminths (such as those that cause river blindness Onchocerciasis Onchocerciasis is infection with the roundworm Onchocerca volvulus. It causes itching, a rash, sometimes with scarring, as well as eye symptoms that may lead to blindness. The infection... read more

). Many of these parasites have very complex life cycles.

) and mites Mite Bites Mites, like ticks, are closely related to spiders. Biting mites, sometimes carried as parasites on the bodies of humans and animals, may transmit disease to humans. (See also Introduction to... read more (for example, scabies Scabies Infestation Scabies is a parasitic skin infestation caused by mites. Scabies usually spreads from person to person through physical contact. People with scabies have severe itching, even though there are... read more

) that live on or burrow into skin are known as ectoparasites. They are transmitted by having close contact with an infected person or their belongings.

Doctors suspect a parasitic infection in people who have typical symptoms and who live in or have traveled to an area where sanitation is poor or where such an infection is known to occur.

Laboratory analysis of specimens, including special tests to identify proteins released by the parasite (antigen testing) or genetic material (DNA) from the parasite, may be needed. Samples of blood, stool, urine, skin, or sputum may be used, depending on which parasite doctors are looking for.

Doctors may test blood samples for antibodies to the parasite. Antibodies Antibodies One of the body's lines of defense ( immune system) involves white blood cells (leukocytes) that travel through the bloodstream and into tissues, searching for and attacking microorganisms and... read more

are proteins produced by the immune system to help defend the body against a particular attack, including that by parasites.

Doctors may also take a sample of tissue that may contain the parasite. For example, a biopsy may be done to obtain a sample of intestinal or other infected tissue. A sample of skin may be snipped. Several samples and repeated examinations may be necessary to find the parasite.

Identifying parasites in the intestinal tract

If parasites live in the intestinal tract, the parasite or its eggs or cysts (a dormant and hardy form of the parasite) may be found in the person’s stool when a sample is examined under a microscope. Or parasites may be identified by testing the stool for proteins released by the parasite or genetic materials from the parasite. Antibiotics, laxatives, and antacids should not be used until after the stool sample has been collected. These drugs can reduce the number of parasites enough to make seeing the parasites in a stool sample difficult or impossible.

In general, measures that help prevent infection by parasites involve

Many preventive measures are sensible everywhere but some are more important in specific areas. Information about precautions needed in specific areas is available from the Centers for Disease Control and Prevention Travelers' Health page.

People need to be particularly careful when they travel to areas where sanitation methods are questionable. In addition, people should think about what they are eating and drinking before they consume it and make sure food is adequately cooked and water is not contaminated. For example, people should avoid drinking from lakes and streams and should avoid swallowing water when using swimming pools or water parks. Even water that looks fresh and clean can contain parasites, so people should not use the appearance of water to judge its safety for drinking.

In areas of the world where food, drink, and water may be contaminated with parasites, wise advice for travelers is to

Because some parasites survive freezing, ice cubes can sometimes transmit disease unless the cubes are made from purified water.

Thorough handwashing using soap and water is very important. People who prepare food for others (for example, restaurant workers) must be particularly careful to wash their hands thoroughly because they can spread infection to many people. Handwashing is important in the following situations:

Preventing parasites acquired through the skin

To know precautions to take in specific countries, people should check the Centers for Disease Control and Prevention Travelers' Health page.

Measures that help protect against insect bites include:

For some parasitic infections, no treatment is needed because the infection disappears on its own.

Some drugs (antiparasitic drugs) are designed particularly to eliminate parasites or, in the case of some worm infections, reduce the number of worms enough so that symptoms clear up. Also, certain antibiotics and antifungal drugs are effective against some parasitic infections.