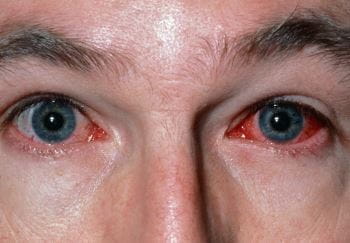 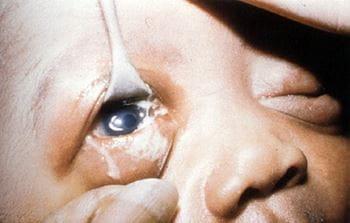 Conjunctivitis in a Newborn

The Conjunctiva
Infectious conjunctivitis is inflammation of the conjunctiva usually caused by viruses or bacteria.

A variety of microorganisms may infect the conjunctiva (the membrane that lines the eyelid and covers the white of the eye). The most common organisms are viral, particularly those from the group known as adenoviruses. Bacterial infections are less frequent. Both viral and bacterial conjunctivitis are very contagious, easily passing from one person to another, or from a person's infected eye to the uninfected eye.

, mumps Mumps Mumps is a contagious viral infection that causes painful enlargement of the salivary glands. The infection may also affect the testes, brain, and pancreas, especially in adults. Mumps is caused... read more

, rubella Rubella Rubella is a contagious viral infection that typically causes mild symptoms, such as joint pain and a rash, but can cause severe birth defects if the mother becomes infected with rubella during... read more

, Zika Zika Virus Infection Zika virus infection is a mosquito-borne viral infection that typically causes no symptoms but can cause fever, rash, joint pain, or infection of the membrane that covers the white of the eye... read more

, and some of the viruses that cause cold- and flu-like symptoms. SARS-CoV2 COVID-19 COVID-19 is an acute respiratory illness that can be severe and is caused by a newly identified coronavirus officially named SARS-CoV-2. COVID-19 was first reported in late 2019 in Wuhan, China... read more can cause conjunctivitis.

Fungal infections are rare and occur mainly in people who use corticosteroid eye drops for a long time or have eye injuries involving organic matter, such as plants or dirt.

Newborns are particularly susceptible to eye infections caused by Chlamydia trachomatis or Neisseria gonorrhoeae, which they acquire from organisms in the mother's birth canal (conjunctivitis of the newborn Conjunctivitis in Newborns Conjunctivitis is inflammation of the conjunctiva, the membrane that lines the eyelid and covers the white of the eye. Conjunctivitis is caused by bacteria, viruses, or a reaction to chemicals... read more

, another type of conjunctivitis caused by Chlamydia trachomatis, is not due to a genital chlamydial infection.

), a sexually transmitted disease that also may spread to the eye by contact with genital secretions from a person who has a genital gonorrheal infection.

Severe infections may scar the conjunctiva, causing abnormalities in the tear film. Sometimes, severe conjunctival infections spread to the cornea (the clear layer in front of the iris and pupil).

When infected, the conjunctiva becomes pink from dilated blood vessels, and a discharge appears in the eye. Often the discharge causes the person's eyes to stick shut, particularly overnight. This discharge may also cause the vision to blur. Vision improves when the discharge is blinked away. If the cornea is infected, vision also blurs but does not improve with blinking. Sometimes the eye feels irritated, and bright light may cause discomfort. Very rarely, severe infections that have scarred the conjunctiva lead to long-term vision difficulties.

People with inclusion conjunctivitis or with conjunctivitis caused by gonorrhea often have symptoms of a genital infection, such as discharge from the penis or vagina and burning during urination.

Conjunctivitis in the newborn causes inflammation of the eyelid and a discharge of pus.

Doctors diagnose infectious conjunctivitis by its symptoms and appearance. The eye is usually closely examined with a slit lamp Slit-Lamp Examination A person who has eye symptoms should be checked by a doctor. However, some eye disorders cause few or no symptoms in their early stages, so the eyes should be checked regularly (every 1 to 2... read more (an instrument that enables a doctor to examine the eye under high magnification). Samples of infected secretions may be sent to a laboratory to identify the infecting organism by a culture. However, doctors usually send samples to a laboratory only in certain situations:

Most people with infectious conjunctivitis eventually get better without treatment. However, some infections, particularly those caused by some bacteria, may last a long time if not treated.

Inclusion conjunctivitis may persist for months if not treated.

Conjunctivitis in the newborn may cause blindness if not treated.

Because infectious (bacterial or viral) conjunctivitis is highly contagious, people should use hand sanitizers before and after cleaning the eye or applying drugs to the eye. Also, a person should be careful not to touch the infected eye and then touch the other eye. Towels and washcloths used to clean the eye should be kept separate from other towels and washcloths.

People with infectious conjunctivitis generally stay home from work or school for a few days, just as they would with a cold. In the most severe cases of viral conjunctivitis, people sometimes stay home for weeks. A person with conjunctivitis should avoid swimming in a pool.

Antibiotics are helpful only in bacterial conjunctivitis. However, because it is difficult to distinguish between bacterial and viral infections, some doctors prescribe antibiotics for everyone with conjunctivitis. Antibiotic eye drops or ointments, such as moxifloxacin, ciprofloxacin, or trimethoprim/polymyxin, which are effective against many types of bacteria, are used for 7 to 10 days. Drops are usually effective, but ointments are sometimes used because they last longer if the eye is watering a lot. Some people may not want to use ointments because they can blur vision for up to 20 minutes after they are applied.

Inclusion conjunctivitis requires antibiotics, such as azithromycin, doxycycline, or erythromycin, which are taken by mouth.

Gonococcal conjunctivitis may be treated with a single injection of ceftriaxone and a single dose of azithromycin (or doxycycline for one week) taken by mouth.

Conjunctivitis of the newborn is prevented by routinely giving silver nitrate eye drops (not available in the United States) or erythromycin ointment to all infants at birth. If an infection develops despite these treatments, newborns are given drugs depending on which bacterium is causing the infection. Infections caused by Neisseria gonorrhoeae are treated with ceftriaxone given by vein (intravenously) or injected into a muscle. Infections caused by Chlamydia trachomatis are treated with erythromycin. The parents should also be treated.

), particularly in those in whom blurring and glare (starbursts or halos around lights) are interfering with important activities. Cyclosporine eye drops are less effective and are prescribed infrequently, typically when corticosteroid drops cause unacceptable side effects.

Antiviral eye drops are not helpful for conjunctivitis caused by viruses (antiviral eye drops are used for some cornea infections caused by viruses—see Herpes Simplex Keratitis Herpes Simplex Keratitis Herpes simplex keratitis is an eye infection that involves the cornea (the clear layer in front of the iris and pupil) and is caused by herpes simplex virus. Eye pain, tearing, redness, a feeling... read more