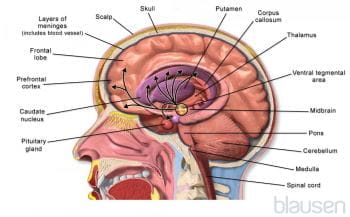 Inside the Brain (Medulloblastoma) 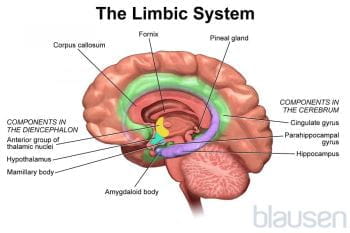 Ventricles of the Brain

The brain’s functions are both mysterious and remarkable, relying on billions of nerve cells and the internal communication between them. All thoughts, beliefs, memories, behaviors, and moods arise within the brain. The brain is the site of thought and intelligence, and the control center for the entire body. The brain coordinates the abilities to move, touch, smell, taste, hear, and see. It enables people to form words, speak, and communicate, understand and manipulate numbers, compose and appreciate music, recognize and understand geometric shapes, plan ahead, and even to imagine and fantasize.

No computer has yet come close to matching the capabilities of the human brain. However, this sophistication comes with a price. The brain needs constant nourishment. It demands an extremely large amount and continuous flow of blood and oxygen—about 25% of the blood flow from the heart. The overall energy consumption of the brain does not change much over time, but certain areas of the brain, use more energy during periods of increased activity (for example, when attempting to learn a new language or learning a new task such as ice skating). A loss of blood flow to the brain for more than about 10 seconds can cause a loss of consciousness.

Lack of oxygen or abnormally low sugar (glucose) levels in the blood can result in less energy for the brain and can seriously injure the brain within 4 minutes. However, the brain is defended by several mechanisms that can work to prevent these problems. For example, if blood flow to the brain decreases, the brain immediately signals the heart to beat faster and more forcefully, and thus to pump more blood. If the sugar level in the blood becomes too low, the brain signals the adrenal glands Overview of the Adrenal Glands The body has two adrenal glands, one near the top of each kidney. They are endocrine glands, which secrete hormones into the bloodstream. Each adrenal gland has two parts. Medulla: The inner... read more to release epinephrine (adrenaline), which stimulates the liver to release stored sugar.

The activity of the brain results from electrical impulses generated by nerve cells (neurons), which process and store information. The impulses pass along the nerve fibers within the brain. How much and what type of brain activity occurs and where in the brain it is initiated depend on a person’s level of consciousness and on the specific activity that the person is doing.

The brain has three main parts:

Each has a number of smaller areas, each with specific functions.

The cerebrum, the largest part of the brain, contains the following:

The cerebrum is divided into two halves—the left and right cerebral hemispheres. The hemispheres are connected by nerve fibers that form a bridge of white matter (called the corpus callosum) through the middle of the brain. Each hemisphere is further divided into lobes:

Each lobe has specific functions, but for most activities, several areas of different lobes in both hemispheres must work together.

The frontal lobes have the following functions:

Particular areas of the frontal lobes control specific movements, typically of the opposite side of the body. In most people, the left frontal lobe controls most of the functions involved in using language.

The parietal lobes have the following functions:

The occipital lobes have the following functions:

The temporal lobes have the following functions:

The limbic system, another subcortical structure, consists of structures and nerve fibers located deep within the cerebrum. The parts of the limbic system are the hypothalamus, the amygdala, the thalamus, mammillary bodies, and the hippocampus. This system connects the hypothalamus with other areas of the frontal and temporal lobes. The limbic system controls the experience and expression of emotions, motivation, memory, and learning, as well as some automatic functions of the body. By producing emotions (such as fear, anger, pleasure, and sadness), the limbic system enables people to behave in ways that help them communicate and survive physical and psychologic upsets. The hippocampus is also involved in the formation and retrieval of memories, and its connections through the limbic system help connect those memories to the emotions experienced when the memories form. Through the limbic system, memories that are emotionally charged are often easier to recall than those that are not. The limbic system also has input into other areas of the brain, such as the basal ganglia, that control intentional movements of the limbs.

The brain stem connects the cerebrum with the spinal cord. It contains a system of nerve cells and fibers (called the reticular activating system) located deep within the upper part of the brain stem. This system controls levels of consciousness and alertness. It also contains many of the nerve center collections that control movements of the eyes, face, jaw, and tongue, including chewing and swallowing.

The brain stem also automatically regulates critical body functions, such as breathing, blood pressure, and heartbeat, and it helps adjust posture and balance. If the entire brain stem becomes severely damaged, consciousness is lost, and these automatic body functions cease. Death soon follows as a result of this brain death Brain Death Brain death is the permanent loss of brain activity. As a result, people cannot breathe or maintain other vital functions on their own, and they permanently lose all awareness and capacity for... read more . However, if the brain stem remains intact, the body may remain alive, even when severe damage to the cerebrum makes awareness, thought, and movement impossible.

The cerebellum, which lies below the cerebrum just above the brain stem, coordinates the body’s movements. With information it receives from the cerebral cortex and the basal ganglia about the position of the limbs, the cerebellum helps the limbs move smoothly and accurately. It does so by constantly adjusting muscle tone and posture.

The cerebellum interacts with areas in the brain stem called vestibular nuclei, which are connected with the organs of balance (semicircular canals) in the inner ear. Together, these structures provide a sense of balance, making walking upright possible.

The cerebellum also stores memories of practiced movements, enabling highly coordinated movements, such as a ballet dancer’s pirouette, to be done with speed and balance. The cerebellum contributes to thought functions such as attention, language, and emotion.

Both the brain and spinal cord are covered by three layers of tissue (meninges) that protect them:

The space between the arachnoid mater and the pia mater (the subarachnoid space) is a channel for cerebrospinal fluid, which helps protect the brain and spinal cord.