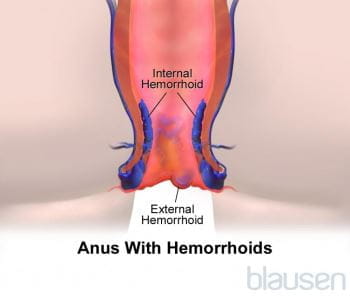 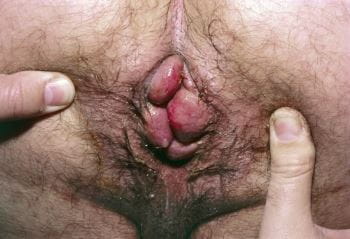 Hemorrhoidopexy
Hemorrhoids are dilated, twisted blood vessels located in the wall of the lower rectum and anus.

Hemorrhoids occur when the blood vessels in the lower rectum or anus become enlarged.

Internal hemorrhoids are hemorrhoids that form above the junction between the anus and rectum (anorectal junction).

Both internal and external hemorrhoids may remain in the anus or protrude outside the anus.

Increased pressure in the vessels of the anorectal area leads to hemorrhoids. This pressure may result from pregnancy, frequent heavy lifting, or repeated straining during bowel movements (defecation). Constipation Constipation in Adults Constipation is difficult or infrequent bowel movements, hard stool, or a feeling that the rectum is not totally empty after a bowel movement (incomplete evacuation). (See also Constipation... read more may contribute to straining.

Internal hemorrhoids often do not cause a visible lump or pain, but they can bleed. Bleeding from internal hemorrhoids typically occurs with bowel movements, causing blood-streaked stool or toilet paper. The blood may turn water in the toilet bowl red. However, the amount of blood is usually small, and hemorrhoids rarely lead to severe blood loss or anemia.

A doctor can readily diagnose swollen, painful hemorrhoids by inspecting the anus and rectum.

An examination with an anoscope (a short, rigid tube used to view the rectum) is done to evaluate painless or bleeding hemorrhoids. People who have bleeding from the rectum may require a sigmoidoscopy or colonoscopy (see Endoscopy Endoscopy Endoscopy is an examination of internal structures using a flexible viewing tube (endoscope). Endoscopy can also be used to treat many disorders because doctors are able to pass instruments... read more ) to rule out a more serious condition, such as a tumor.

Usually, hemorrhoids do not require treatment unless they cause symptoms. Taking stool softeners or bulking the stools with fiber supplements (such as psyllium) may relieve straining with bowel movements. Hemorrhoid symptoms can sometimes be relieved by soaking the anus in warm water in what is known as a sitz bath. The soaking is accomplished by squatting or sitting for 10 to 15 minutes in a partially filled tub or using a container filled with warm (not hot) water placed on the toilet bowl or commode.

For external thrombosed hemorrhoids, especially those that cause severe pain, a doctor may inject a local anesthetic Local anesthesia and regional anesthesia Surgery is the term traditionally used to describe procedures (called surgical procedures) that involve manually cutting or stitching tissue to treat diseases, injuries, or deformities. However... read more to numb the area and cut out the blood clot or hemorrhoid, which sometimes relieves the pain more rapidly.

Taking acetaminophen or a nonsteroidal anti-inflammatory drug (NSAID) can help alleviate the pain of a thrombosed hemorrhoid. Local anesthetic ointments or witch hazel compresses also may help. Pain and swelling usually diminish after a short while, and clots disappear over 4 to 6 weeks.

Large internal hemorrhoids and those that do not respond to injection sclerotherapy can be tied off with rubber bands (a procedure called rubber band ligation). The band causes the hemorrhoid to wither and drop off painlessly. One hemorrhoid is treated about every 2 weeks.

Other methods to destroy internal hemorrhoids, such as Doppler-guided hemorrhoid artery ligation, are being tried. In this method, hemorrhoid arteries are identified using ultrasonography and tied off with a suture, thus reducing the blood supply to the hemorrhoids.