Overview of Sunlight and Skin Damage 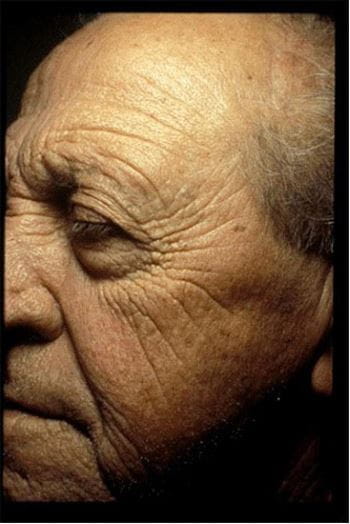 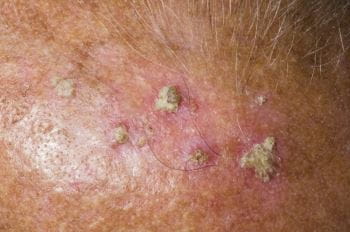 Actinic Keratosis on the Scalp

Sunlight stimulates vitamin D production, helps control some chronic skin diseases (such as psoriasis Psoriasis Psoriasis is a chronic, recurring disease that causes one or more raised, red patches that have silvery scales and a distinct border between the patch and normal skin. A problem with the immune... read more

), and causes a sense of well-being. However, sunlight can cause skin damage.

but also wrinkling and other changes associated with aging skin (photoaging Photoaging Sunlight stimulates vitamin D production, helps control some chronic skin diseases (such as psoriasis), and causes a sense of well-being. However, sunlight can cause skin damage. Damage includes... read more

, skin cancers Overview of Skin Cancer Skin cancer is the most common type of cancer. Skin cancer is most common among people who work or play sports outside and among sunbathers. Fair-skinned people are particularly susceptible... read more , and even allergic reactions and worsening of some skin diseases (see Photosensitivity Reactions Photosensitivity Reactions Photosensitivity, sometimes referred to as a sun allergy, is an immune system reaction that is triggered by sunlight. Sunlight can trigger immune system reactions. People develop itchy eruptions... read more ).

Ultraviolet (UV) light, although invisible to the human eye, is the component of sunlight that has the most effect on skin. UV light is classified into three types, depending on its wavelength:

The amount of UV light reaching the earth's surface is increasing, especially in the northern latitudes. This increase is caused by depletion of the protective ozone layer high in the atmosphere. Ozone, a naturally occurring chemical, blocks much UV light from reaching the surface of the earth. Chemical reactions between ozone and chlorofluorocarbons (chemicals in refrigerants and spray can propellants) are depleting the amount of ozone in the protective ozone layer.

The amount of UV light reaching the earth's surface also varies depending on other factors. UV light is more intense between 10 AM and 3 PM, during the summer, and at high altitudes and low latitudes (such as at the equator). Glass, heavy clouds, smoke, and smog filter out much UV light, but UV rays may pass through light clouds, fog, and about 1 foot of clear water, potentially causing severe burns.

The skin undergoes certain changes when exposed to UV light, to protect against damage. The epidermis (the skin's uppermost layer) thickens, blocking UV light. The melanocytes (pigment-producing skin cells) make increased amounts of melanin, a brownish-colored pigment that darkens the skin, resulting in a tan. Tanning provides some natural protection against future exposure to UV radiation because melanin absorbs the energy of UV light and helps prevent the light from damaging skin cells and penetrating deeper into the tissues. Otherwise, tanning has no health benefits. Tanning for the sake of being tanned is hazardous to health (see Are Tans Healthy? Are Tans Healthy? Sunburn results from a brief (acute) overexposure to ultraviolet (UV) light. Overexposure to ultraviolet light causes sunburn. Sunburn causes painful reddened skin and sometimes blisters, fever... read more

Sensitivity to sunlight varies according to the amount of melanin Overview of Skin Pigment Melanin is the pigment that produces the various shades and colors of human skin, hair, and eyes. Coloration (pigmentation) is determined by the amount of melanin in the skin. Without melanin... read more

The amount of melanin present in a person's skin depends on heredity as well as on the amount of recent sun exposure. Some people are able to produce large amounts of melanin in response to UV light, whereas others produce very little. People with blonde or red hair are especially susceptible to the short-term and long-term effects of UV radiation, because they are not able to produce enough melanin. The melanin in their skin can also become distributed unevenly, resulting in freckling. People with vitiligo Vitiligo Vitiligo is a loss of melanocytes that causes patches of skin to turn white. Patches of whitened skin are present on various parts of the body. Doctors usually base the diagnosis on the appearance... read more

have patchy areas of skin that have no pigment. People with albinism Albinism Albinism is a rare hereditary disorder in which little or none of the skin pigment melanin is formed. The skin, hair, and eyes, or sometimes just the eyes, are affected. Typically, the hair... read more

have little or no melanin at all.

Exposure to sunlight prematurely ages the skin. Damage to the skin caused by prolonged exposure to sunlight is known as photoaging. Exposure to UV light causes fine and coarse wrinkles, irregular pigmentation, large frecklelike spots called lentigines, a yellowish complexion, and a leathery, rough skin texture. Although fair-skinned people are most vulnerable, anyone's skin will change with enough exposure.

Actinic keratoses (solar keratoses) are precancerous growths caused by long-term sun exposure. These growths are usually pink or red and appear as irregular, scaly areas. They may also be light gray or brown and feel hard, rough, or gritty.

The more sun exposure people have, the higher their risk of precancerous growths and skin cancers Overview of Skin Cancer Skin cancer is the most common type of cancer. Skin cancer is most common among people who work or play sports outside and among sunbathers. Fair-skinned people are particularly susceptible... read more , including squamous cell carcinoma Squamous Cell Carcinoma Squamous cell carcinoma is cancer that begins in the squamous cells of the skin. Thick, scaly growths appear on the skin and do not heal. To diagnose the cancer, doctors do a biopsy. Treatment... read more

, and malignant melanoma Melanoma Melanoma is a skin cancer that begins in the pigment-producing cells of the skin (melanocytes). Melanomas can begin on normal skin or in existing moles. They may be irregular, flat or raised... read more

. Skin cancer is especially common among people who were extensively exposed to sunlight as children and adolescents and among those who are continuously exposed to the sun as part of their profession or recreational activities (such as athletes, farmers, ranchers, sailors, and frequent sunbathers). In addition, UV exposure in tanning salons increases the risk of skin cancer and skin damage.

). Damage that is already done is difficult to reverse.

Moisturizing creams temporarily plump up wrinkles, and makeup helps hide imperfections in skin color (such as freckles, sun spots, and lentigines) and some fine wrinkles. Deep wrinkles and substantial skin damage, however, require significant treatment to be reversed.

Although these treatments can improve the look of superficial skin changes (for example, fine wrinkles, irregular pigmentation, yellowish or brownish discoloration, and roughness), they have much less of an effect on deeper wrinkles and substantial skin damage.

Actinic keratoses are treated depending on the number of growths, where the growths are located, and what therapy people can tolerate.

If a person has many growths, a liquid or cream containing fluorouracil (a chemotherapy drug applied to the skin) may be used. Often, during such treatment, the skin temporarily looks worse because fluorouracil causes redness, scaling, and burning of the keratoses and of the surrounding sun-damaged skin.

The drug imiquimod is useful in treating actinic keratoses because it helps the immune system to recognize and destroy precancerous skin growths and early skin cancer. Imiquimod is applied to the skin for about 12 to 16 weeks. Ingenol mebutate is a newer gel that is applied to the skin for 2 to 3 days to treat actinic keratoses. The main advantage of ingenol mebutate is its short course of therapy. Both imiquimod and ingenol mebutate cause redness, scaling, and burning similar to that caused by fluorouracil.

Another treatment is photodynamic therapy, in which a chemical preparation is applied to the skin and then artificial light is applied to the growths. This therapy causes a sunburn-like appearance. The main advantage of photodynamic therapy is that it typically entails fewer days overall of skin redness, scaling, and irritation. People may need more than one treatment session.