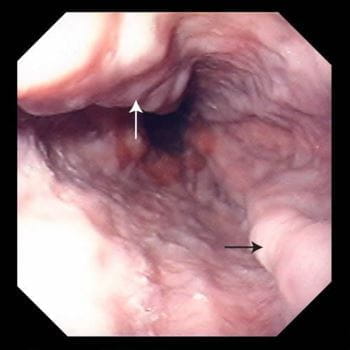 Varices also can form in the upper part of the stomach near where the esophagus enters. These are called gastric varices and they cause similar symptoms.

Esophageal varices are caused by

The portal vein is the large vein that brings blood to the liver from the intestines and other abdominal organs such as the spleen, pancreas, and gallbladder. High blood pressure in the portal vein is called portal hypertension. The most common cause of portal hypertension is liver scarring due to cirrhosis Cirrhosis of the Liver Cirrhosis is the widespread distortion of the liver's internal structure that occurs when a large amount of normal liver tissue is permanently replaced with nonfunctioning scar tissue. The scar... read more

Portal hypertension leads to the development of new veins (called collateral vessels) that bypass the liver. These veins directly connect the portal blood vessels to veins that take blood away from the liver into the general circulation. Collateral vessels develop at specific places. The most important are located at the lower end of the esophagus and at the upper part of the stomach. Here, the vessels enlarge and become full of twists and turns—that is, they become varicose veins in the esophagus (esophageal varices) or stomach (gastric varices). These enlarged vessels are fragile and prone to bleeding. Usually, there is no obvious trigger of the bleeding.

People with esophageal varices usually have no symptoms until the varices begin to bleed. Then, people vomit bright red blood, sometimes in large amounts. The bleeding is painless. People who lose a lot of blood may have signs of shock Symptoms Shock is a life-threatening condition in which blood flow to the organs is low, decreasing delivery of oxygen and thus causing organ damage and sometimes death. Blood pressure is usually low... read more , including feeling lightheaded, weak, and sweaty. Their heart may beat quickly and their blood pressure may be low.

Doctors suspect bleeding esophageal varices when people who are known to have chronic liver disease, particularly cirrhosis, begin vomiting blood. Then doctors put a flexible viewing tube (endoscope Endoscopy Endoscopy is an examination of internal structures using a flexible viewing tube (endoscope). Endoscopy can also be used to treat many disorders because doctors are able to pass instruments... read more ) through the mouth to look at the esophagus. If they see varices, they can also do treatments through the endoscope to stop the bleeding.

People with variceal bleeding usually need fluids given intravenously to replace their blood loss. If they have lost a lot of blood, they may need a blood transfusion Overview of Blood Transfusion A blood transfusion is the transfer of blood or a blood component from one healthy person (a donor) to a sick person (a recipient). Transfusions are given to increase the blood's ability to... read more

During endoscopy, doctors can do treatments to stop the bleeding. Most often, doctors apply bands around the varices to close them off (a procedure called endoscopic banding). Sometimes they inject the varices with substances that seal them closed (a procedure called injection sclerotherapy). At the same time, doctors may give the drug octreotide or vasopressin intravenously to help stop the bleeding.

If bleeding continues despite these treatments, doctors may do a procedure called portosystemic shunting. This procedure connects the portal vein or one of its branches to a vein in the general circulation and reroutes most of the blood that normally goes to the liver so that it bypasses the liver. This bypass (called a shunt) lowers pressure in the portal vein so that bleeding is easier to control. There are various types of portosystemic shunt procedures. In one type, called transjugular intrahepatic portosystemic shunting (TIPS), doctors, using x-rays for guidance, insert a catheter with a needle into a vein in the neck and thread it to veins in the liver. The catheter is used to create a passage (shunt) that connects the portal vein (or one of its branches) directly with one of the hepatic veins. Less commonly, portosystemic shunts are created surgically.

If the person's life is in immediate danger from severe bleeding while waiting for the shunt procedure, doctors may place a tube with balloons down the person's esophagus. They inflate the balloons to squeeze (compress) the varices, which controls the bleeding. This tube is only a temporary measure.

Even after successful treatment, esophageal varices can bleed again, particularly if the person's liver disease remains active. Doctors may give drugs such as beta-blockers to help control portal hypertension, but people who continue to have problems may need liver transplantation Liver Transplantation Liver transplantation is the surgical removal of a healthy liver or sometimes a part of a liver from a living person and then its transfer into a person whose liver no longer functions. (See... read more .

Overview of the Esophagus