Full review/revision Jan 2023
VIEW PROFESSIONAL VERSION
GET THE QUICK FACTS
Topic Resources
Atrial fibrillation and atrial flutter are very fast electrical discharge patterns that make the atria (upper chambers of the heart) contract very rapidly, with some of the electrical impulses reaching the ventricles and sometimes causing them to contract faster and less efficiently than normal.

During atrial fibrillation, electrical impulses are triggered from many areas in and around the atria rather than just one area (the sinoatrial node—see figure ). The resulting electrical activity is chaotic rather than organized and thus, the atrial walls quiver rather than contract. Because the atria do not contract normally, they do not help pump blood into the ventricles. When the atria do not help pump blood to the ventricles, the maximum amount of blood that the heart pumps is reduced by about 10%. This slightly lower maximum output is usually not a problem except in people who have heart disease, particularly when they exert themselves.

During atrial flutter, unlike in atrial fibrillation, electrical activity in the atria is coordinated. Thus, the atria do contract, but at a very rapid rate (250 to 350 times per minute). This rate is too fast to allow every impulse to be conducted through the atrioventricular node to the ventricles. For most people who are not being treated, every second atrial impulse gets to the ventricules, resulting in a ventricular rate of about 150 beats per minute.

Atrial fibrillation or atrial flutter may occur even when there is no other heart disorder. More often, these arrhythmias are caused by such conditions as

The main complications include the following:

In atrial fibrillation or atrial flutter, the atria do not empty completely into the ventricles with each beat. Over time, some blood inside the atria may stagnate, and blood clots may form. Pieces of the clot may break off, often shortly after atrial fibrillation converts back to normal rhythm—whether spontaneously or because of treatment. These pieces of clot may pass into the left ventricle, travel through the bloodstream (becoming emboli), and block a smaller artery. If pieces of a clot block an artery in the brain, a stroke Overview of Stroke A stroke occurs when an artery to the brain becomes blocked or ruptures, resulting in death of an area of brain tissue due to loss of its blood supply (cerebral infarction) and symptoms that... read more results. Rarely, a stroke is the first sign of atrial fibrillation or atrial flutter.

When atrial fibrillation or atrial flutter causes the heart to beat too rapidly, the ventricles do not have enough time to fill completely with blood. Because they do not fill completely, the amount of blood pumped by the heart decreases. This decrease may cause the blood pressure to fall, and heart failure Heart Failure (HF) Heart failure is a disorder in which the heart is unable to keep up with the demands of the body, leading to reduced blood flow, back-up (congestion) of blood in the veins and lungs, and/or... read more

Symptoms of atrial fibrillation or atrial flutter depend largely on how fast the ventricles beat. When the ventricular rate is normal or only slightly increased (less than about 120 beats per minute), people usually have no symptoms. Higher rates cause unpleasant awareness of heart beats (palpitations Palpitations Palpitations are the awareness of heartbeats. The sensation may feel like pounding, fluttering, racing, or skipping beats. Other symptoms—for example, chest discomfort or shortness of breath—may... read more ), shortness of breath,or chest pain.

The reduced pumping ability of the heart may cause weakness, faintness, and shortness of breath. When the ventricular rate is very fast, some people, especially older people and those with heart disorders, develop heart failure or chest pain. Very rarely, such people may develop shock Shock Shock is a life-threatening condition in which blood flow to the organs is low, decreasing delivery of oxygen and thus causing organ damage and sometimes death. Blood pressure is usually low... read more (very low blood pressure).

) is done. It enables doctors to evaluate the heart valves and look for blood clots in the atria.

Doctors usually also do blood tests to look for an overactive thyroid gland.

Treatment of atrial fibrillation or atrial flutter is designed to control the rate at which the ventricles contract, to restore the normal rhythm of the heart, and to treat the disorder causing the arrhythmia. Drugs to prevent the formation of blood clots and emboli (anticoagulants or aspirin) are usually given.

Treatment of the underlying disorder is important but does not always alleviate atrial arrhythmias. However, treatment of an overactive thyroid gland or surgery to correct a heart valve disorder or a birth defect of the heart may help. 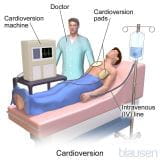 ). Such people include those in whom the atrial fibrillation or atrial flutter causes heart failure or other symptoms of low heart output.

Before restoring normal rhythm, because there is a risk that a blood clot will break off and cause a stroke during conversion, measures must be taken to prevent blood clots.

Methods of conversion include

) so that it does not cause ventricular fibrillation. Cardioversion is effective in 75 to 90% of people.

Certain antiarrhythmic drugs (most commonly, amiodarone, flecainide, procainamide, propafenone, or sotalol—see table ) also may restore a normal rhythm. However, these drugs are effective in only about 50 to 60% of people and often cause side effects.

Conversion to a normal rhythm by any means becomes less likely the longer the arrhythmia has been present (especially after 6 months or more), the larger the atria become, and the more severe the underlying heart disorder becomes. When conversion is successful, the risk of recurrence is high, even if people are taking a drug to prevent recurrence (typically one of the same drugs used to convert the arrhythmia to a normal rhythm).

Rarely, when all other treatments of atrial fibrillation are ineffective, the atrioventricular node can be destroyed by an ablation procedure Destroying Abnormal Heart Tissue (Ablation) There are many causes of abnormal heart rhythms (arrhythmias). Some arrhythmias are harmless and do not need treatment. Sometimes arrhythmias stop on their own or with changes in lifestyle,... read more . Ablation is a process to kill a specific area of abnormal tissue using energy from radiofrequency waves, lasers, or electrical current, or by applying very cold temperatures. These are applied using a catheter inserted into the heart.

By destroying the AV node, this ablation procedure completely stops conduction from the atria to the ventricles. Thus, although the atria continue to fibrillate, the ventricular rate slows down. However, a permanent artificial pacemaker Artificial Pacemakers There are many causes of abnormal heart rhythms (arrhythmias). Some arrhythmias are harmless and do not need treatment. Sometimes arrhythmias stop on their own or with changes in lifestyle,... read more

is required to activate the ventricles afterward.

Another type of ablation procedure for atrial fibrillation destroys atrial tissue near the pulmonary veins (pulmonary vein isolation). Pulmonary vein isolation spares the atrioventricular node and can stop the atrial fibrillation but is less often successful (60 to 80%), and the risk of serious complications is significant (1 to 5%). Accordingly, this procedure is often reserved for the best candidates (such as, younger people who have no significant heart disease like a heart valve disorder, people without other options such as those with atrial fibrillation that does not respond to drug therapy, or people with heart failure Heart Failure (HF) Heart failure is a disorder in which the heart is unable to keep up with the demands of the body, leading to reduced blood flow, back-up (congestion) of blood in the veins and lungs, and/or... read more

For people who have atrial flutter, ablation may be used to interrupt the flutter circuit in the atrium and permanently re-establish normal rhythm. This procedure is successful in about 90% of people.

Measures to prevent blood clots (and thus prevent stroke Overview of Stroke A stroke occurs when an artery to the brain becomes blocked or ruptures, resulting in death of an area of brain tissue due to loss of its blood supply (cerebral infarction) and symptoms that... read more ) are necessary when atrial fibrillation or atrial flutter is converted back to normal rhythm. Most people also usually need such measures during long-term treatment. Doctors typically give an anticoagulant Anticoagulation Pulmonary embolism is the blocking of an artery of the lung (pulmonary artery) by a collection of solid material brought through the bloodstream (embolus)—usually a blood clot (thrombus) or... read more such as warfarin, dabigatran, or a clotting factor Xa inhibitor (rivaroxaban, apixaban, or edoxaban). People who cannot be given an anticoagulant may be given aspirin, which also can help prevent stroke, but aspirin is not as effective as warfarin.

Doctors use warfarin or other anticoagulants for people who have one or more risk factors for developing stroke. Such risk factors include

Some people without those risk factors are given aspirin, and some are not given any treatment to prevent strokes.