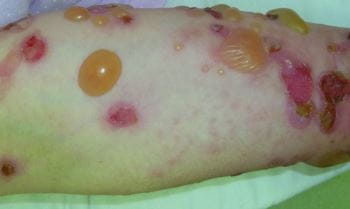 Bullous Pemphigoid on the Arm 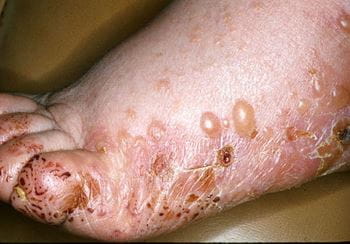 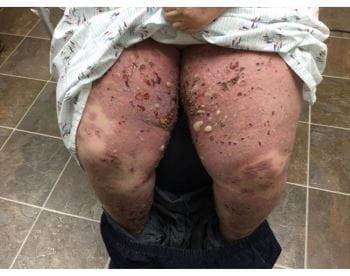 Bullous Pemphigoid on the Legs
Bullous pemphigoid is an autoimmune disease that causes blistering of the skin.

The body's immune system Overview of the Immune System The immune system is designed to defend the body against foreign or dangerous invaders. Such invaders include Microorganisms (commonly called germs, such as bacteria, viruses, and fungi) Parasites... read more makes special cells that protect the body against harmful foreign invaders such as bacteria and viruses. Some of these cells respond to invaders by producing proteins called antibodies. Antibodies Antibodies One of the body's lines of defense (immune system) involves white blood cells (leukocytes) that travel through the bloodstream and into tissues, searching for and attacking microorganisms and... read more

(which also causes blistering), is not usually fatal, and does not result in widespread peeling of skin. It can involve a large portion of the skin, however, and can be very uncomfortable.

Although the cause of bullous pemphigoid is unknown, drugs (such as furosemide, spironolactone, sulfasalazine, antipsychotic drugs, penicillin, penicillamine, and etanercept), physical causes (such as radiation therapy for breast cancer and ultraviolet radiation), skin disorders (such as psoriasis Psoriasis Psoriasis is a chronic, recurring disease that causes one or more raised, red patches that have silvery scales and a distinct border between the patch and normal skin. A problem with the immune... read more

, lichen planus Lichen Planus Lichen planus, a recurring itchy disease, starts as a rash of small, separate, red or purple bumps that then combine and become rough, scaly patches. The cause may be a reaction to certain drugs... read more

, and some infections), and certain other disorders (such as diabetes Diabetes Mellitus (DM) Diabetes mellitus is a disorder in which the body does not produce enough or respond normally to insulin, causing blood sugar (glucose) levels to be abnormally high. Urination and thirst are... read more , rheumatoid arthritis Rheumatoid Arthritis (RA) Rheumatoid arthritis is an inflammatory arthritis in which joints, usually including those of the hands and feet, are inflamed, resulting in swelling, pain, and often destruction of joints.... read more

, ulcerative colitis Ulcerative Colitis Ulcerative colitis is a chronic inflammatory bowel disease in which the large intestine (colon) becomes inflamed and ulcerated (pitted or eroded), leading to flare-ups (bouts or attacks) of... read more , and multiple sclerosis Overview of Demyelinating Disorders Most nerve fibers inside and outside the brain are wrapped with many layers of tissue composed of a fat (lipoprotein) called myelin. These layers form the myelin sheath. Much like the insulation... read more ) may trigger an autoimmune attack on the skin.

Itching is often the first symptom of bullous pemphigoid. Blisters may not appear for several years. Before blisters appear, large, raised areas may develop, sometimes looking like hives. The immune system eventually forms antibodies directed against the skin, resulting in large, tense, and very itchy blisters surrounded by areas of normal-appearing skin or red, inflamed skin. Blisters commonly develop on the parts of the body that are able to flex, such as the backs of the knees, the underarms, the insides of the elbows, and the groin. Blisters in the mouth are rare.

Doctors usually recognize bullous pemphigoid by its characteristic blisters. However, it is not always easy to distinguish it from pemphigus vulgaris and other blistering conditions, such as severe poison ivy.

Bullous pemphigoid is diagnosed with certainty by examining under a microscope a sample of skin taken from in and around a blister (skin biopsy Biopsy Doctors can identify many skin disorders simply by looking at the skin. A full skin examination includes examination of the scalp, nails, and mucous membranes. Sometimes the doctor uses a hand-held... read more

). Doctors differentiate bullous pemphigoid from pemphigus vulgaris and other blistering disorders by noting the layers of skin involved and the particular appearance of antibody deposits.

Bullous pemphigoid is a chronic, potentially fatal disease, particularly without treatment. Although drugs are helpful, they may cause side effects.

With treatment, symptoms typically go away within months, but treatment is sometimes needed for several years.

Initially, doctors give people potent corticosteroid creams, such as clobetasol, to apply directly to the skin. These creams may reduce the need for drugs taken by mouth. People who have blisters on large portions of skin often need the corticosteroid prednisone taken by mouth, which is gradually reduced (tapered) after several weeks. Most people are symptom-free after 2 to 10 months, but treatment may need to be continued for several years before it can be stopped completely.

The combination of nicotinamide and either minocycline or tetracycline is sometimes successful in treating bullous pemphigoid. Other drug options include treatment with only dapsone, sulfapyridine, or erythromycin. Immune globulin given by vein (intravenously) is used occasionally. Sometimes, drugs that suppress the immune system, such as methotrexate, azathioprine, mycophenolate mofetil, rituximab, omalizumab, or cyclophosphamide, are given to people with severe disease that does not respond to other treatment.

Although some skin care, such as keeping the affected areas clean to prevent infection and perhaps wearing loose-fitting clothes, may be needed, most people do not require hospitalization for intensive skin care treatment.