People with this disorder compulsively pull or pluck out their hair for noncosmetic reasons. That is, they do not pull hair out to improve their appearance. They usually pull hair from their scalp, eyebrows, and/or eyelids, but any body hair may be pulled out.

How much hair is pulled out and where it is pulled from varies from person to person. Some people with hair-pulling disorder have areas of complete baldness. Eyelashes and/or eyebrows may be missing. Other people merely have thinned hair. People may change the spots they pull hair from over time.

Some people pull their hair out somewhat automatically, without thinking about it. Others are more conscious of the activity.

People with hair-pulling disorder do not pull out their hair because they are concerned about their appearance and trying to fix it (as people with body dysmorphic disorder Body Dysmorphic Disorder In body dysmorphic disorder, a preoccupation with one or more nonexistent or slight defects in appearance results in significant distress and/or impairs functioning. People typically spend hours... read more are). However, they may feel tense or anxious just before they do it, and hair pulling may relieve that feeling. Afterward, they may feel a sense of gratification.

Many activities (rituals) may accompany hair pulling. People may painstakingly search for a particular kind of hair to pull. They may roll the hair between their fingers, pull the strands between their teeth, or bite the hair once it is pulled. Many swallow their hair. The swallowed hair may form a lump that becomes stuck in the stomach or other parts of the digestive tract. These lumps, called trichobezoars Bezoars Bezoars are tightly packed collections of partially digested or undigested material that can become stuck in the stomach or intestines. Masses of undigestible materials can get stuck in the... read more 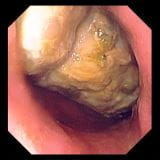 , may make people feel prematurely full after eating or cause nausea, vomiting, pain, and other digestive symptoms.

Many people with hair-pulling disorder also repeatedly pick at their skin Skin-Picking (Excoriation) Disorder In skin-picking disorder, people repeatedly pick at their skin, damaging it. People with skin-picking disorder may feel tense or anxious just before they do it, and skin picking may relieve... read more , bite their nails, chew their cheeks, or do other repetitive body-focused activities Body-Focused Repetitive Behavior Disorder In body-focused repetitive behavior disorder, people repeatedly engage in activities that involve their body, such as nail biting, lip biting, or cheek chewing, and repeatedly try to stop the... read more . They may also have depression Depression A short discussion of prolonged grief disorder. Depression is a feeling of sadness and/or a decreased interest or pleasure in activities that becomes a disorder when it is intense enough to... read more .

Affected people may feel embarrassed by or ashamed of the way they look or of their inability to control their behavior. They may try to camouflage the hair loss by wearing wigs or scarves. Some pull out hair from widely scattered areas to disguise the loss. People may avoid situations in which others may see the hair loss. They typically do not pull hair out in front of others, except for family members. People may also be distressed by their loss of control, and they repeatedly try to stop or reduce pulling their hair out but they cannot.

Some people pull hair from other people or from pets or pull threads from clothing, blankets, or other textiles.

Symptoms typically vary in intensity but may continue throughout life.

Sometimes doctors prescribe drugs to help control symptoms. Selective serotonin reuptake inhibitors or clomipramine (types of antidepressants Drug Treatment for Depression Agomelatine, a new type of antidepressant, is a possible treatment for major depressive episodes. Several types of drugs can be used to treat depression: Selective serotonin reuptake inhibitors... read more ) may help, particularly if the person also has symptoms of depression Depression A short discussion of prolonged grief disorder. Depression is a feeling of sadness and/or a decreased interest or pleasure in activities that becomes a disorder when it is intense enough to... read more or anxiety Overview of Anxiety Disorders Anxiety is a feeling of nervousness, worry, or unease that is a normal human experience. It is also present in a wide range of psychiatric disorders, including generalized anxiety disorder,... read more . N-Acetylcysteine may also be helpful.