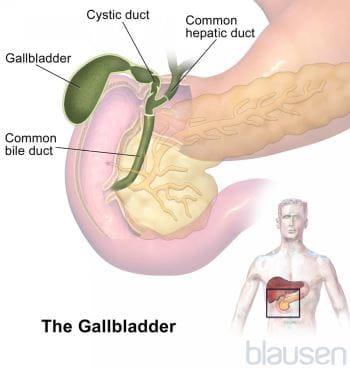 The Gallbladder and Bile Ducts

The Liver and Gallbladder

Bile salts aid in digestion by making cholesterol, fats, and fat-soluble vitamins easier to absorb from the intestine.

Bilirubin is the main pigment in bile. Bilirubin is a waste product that is formed from hemoglobin (the protein that carries oxygen in the blood) and is excreted in bile. Hemoglobin is released when old or damaged red blood cells are destroyed.

After bile enters and passes down the small intestine, about 90% of bile salts are reabsorbed into the bloodstream through the wall of the lower small intestine. The liver extracts these bile salts from the blood and resecretes them back into the bile. Bile salts go through this cycle about 10 to 12 times a day. Each time, small amounts of bile salts escape absorption and reach the large intestine, where they are broken down by bacteria. Some bile salts are reabsorbed in the large intestine. The rest are excreted in the stool.

are hard masses consisting mainly of cholesterol. Gallstones may form in the gallbladder or bile ducts. Gallstones usually cause no symptoms. However, gallstones may block the flow of bile from the gallbladder, causing pain (biliary colic) or inflammation. They may also migrate from the gallbladder to the bile duct, where they can block the normal flow of bile to the intestine, causing jaundice Jaundice in Adults In jaundice, the skin and whites of the eyes look yellow. Jaundice occurs when there is too much bilirubin (a yellow pigment) in the blood—a condition called hyperbilirubinemia. (See also Overview... read more

(a yellowish discoloration of the skin and whites of the eyes) in addition to pain and inflammation. The flow of bile can also be blocked by tumors. Other causes of blocked flow are less common.

Effects of Aging on the Liver

Overview of the Liver and Gallbladder