A discharge from the vagina may occur normally or may result from inflammation of the vagina (vaginitis), often due to an infection. The genital area (vulva)—the area around the opening of the vagina—may also be inflamed.

Depending on the cause of the discharge, other symptoms are often also present. They include itching Genital Itching Genital itching may involve the vagina or the genital area (vulva), which contains the external genital organs. Itching is an unpleasant sensation that seems to require scratching for relief... read more , burning, irritation, redness, and sometimes pain during sexual intercourse.

After menopause, many women have an abnormal discharge. It occurs because the decrease in estrogen levels causes the vagina to thin and become drier. A thin, dry vagina is more likely to become irritated and inflamed, resulting in a discharge. Symptoms that affect the vagina and urinary tract after menopause are called genitourinary syndrome of menopause. These symptoms include vaginal dryness, pain during sexual intercourse, urinary urgency, and urinary tract infections.

During childhood, sexual abuse Sexual abuse Child maltreatment includes all types of abuse and neglect of a child under the age of 18 by a parent, caregiver, or another person in a custodial role (for example, clergy, coach, or teacher)... read more

may be the cause. Such abuse can result in injury or a sexually transmitted infection. 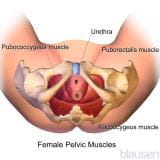 , and, for women who are allergic to latex, latex condoms.

Women or girls with most warning signs should see a doctor within a day.

If women recognize the symptoms of a yeast infection Vaginal Yeast Infection (Candidiasis) The vagina is infected by a yeast called Candida, usually Candida albicans, resulting in a yeast infection called candidiasis. Being pregnant or having diabetes or a weakened immune... read more , are confident that what they have is a yeast infection, and have no other symptoms, they may use a nonprescription vaginal treatment if that is available. A discharge caused by a yeast infection is usually distinctive. It is thick, white, and often clumpy, resembling cottage cheese. However, sometimes yeast infections cause mainly itching and burning with only a small amount of discharge. If the discharge persists or symptoms return after treatment, women should see a doctor.

In children, a vaginal discharge may be due to a foreign object in the vagina. If no foreign object is present and children have signs of an injury, sexual abuse is possible. If they have unexplained vaginal discharge, a sample of the discharge is taken from the vagina or cervix and tested. If abuse is suspected, measures to ensure the child’s safety are taken, and the case is reported to the appropriate authorities.

Other questions include whether women use hygiene sprays or other products that may irritate the genital area and whether women have any conditions that can increase the risk of having a vaginal discharge (such as taking antibiotics frequently or having diabetes). Doctors also ask about possible exposure to sexually transmitted infections.

Unless the cause is obvious (such as a foreign object or an allergic reaction), doctors use a cotton swab to take a sample of the discharge from the vagina or cervix. They examine the sample under a microscope to check for the microorganisms that can cause yeast infections, bacterial vaginosis, and Trichomonas vaginitis. They usually also send a sample to the laboratory to test for gonorrhea Diagnosis Gonorrhea is a sexually transmitted infection caused by the bacteria Neisseria gonorrhoeae, which infect the lining of the urethra, cervix, rectum, and throat or the membranes that cover... read more

Washing every day without soap or, if soap is necessary, with a mild, nonallergenic soap (such as glycerin soap) and rinsing and drying thoroughly are recommended. Changing underwear and bathing or showering once a day may help relieve symptoms.

Placing ice packs on the genital area or sitting in a warm sitz bath may reduce soreness and itching. A sitz bath is taken in the sitting position with water covering only the genital and rectal area. Sitz baths can be taken in the bathtub filled with a little water or in a large basin. Flushing the genital area with lukewarm water squeezed from a water bottle may also provide relief.

If a vaginal infection, such as bacterial vaginosis, a yeast infection, or Trichomonas vaginitis, is diagnosed, antibiotics or antifungal drugs (taken by mouth or inserted into the vagina) are required.

After menopause, estrogen levels decrease markedly. As a result, the amount of normal discharge usually decreases. However, the decrease in estrogen causes the lining of the vagina to thin and become drier and fragile. The thin, dry vagina is more likely to become irritated, often resulting in an abnormal discharge from the vagina. This discharge may be watery and thin or thick and yellowish. Vaginal dryness may make sexual intercourse painful. Vaginal dryness, pain during sexual intercourse, urinary urgency, and urinary tract infections are symptoms of the genitourinary syndrome of menopause. Low-dose estrogen hormone therapy Hormone Therapy for Menopause Menopause is the permanent end of menstrual periods and thus of fertility. For up to several years before and just after menopause, estrogen levels fluctuate widely, periods become irregular... read more

may be used to treat this syndrome.