Full review/revision Apr 2021 | Modified Sep 2022
VIEW PROFESSIONAL VERSION
GET THE QUICK FACTS
Topic Resources
Cellulitis is a spreading bacterial infection of the skin and the tissues immediately beneath the skin.

). People who are exposed in a hospital or nursing facility commonly acquire a particular strain of MRSA that may respond differently to antibiotics than other strains of MRSA that are more common outside health care facilities.

Bacteria usually enter through small breaks in the skin that result from scrapes, punctures, surgery, burns, fungal infections (such as athlete's foot Athlete's Foot (Tinea Pedis) Athlete’s foot is a dermatophyte (fungal) infection of the skin of the feet. Symptoms of tinea pedis include a build up of scale on the feet and sometimes redness and itching. Doctors base the... read more

), animal bites, and skin disorders. Areas of the skin that become swollen with fluid (edema) are especially vulnerable. However, cellulitis can also occur in skin that is not obviously injured.

Cellulitis most commonly develops on the legs but may occur anywhere. Cellulitis usually only affects one side of the body, such as one hand or one leg.

The first symptoms of cellulitis are redness, pain, and tenderness over an area of skin. These symptoms are caused both by the bacteria themselves and by the body’s attempts to fight the infection. The infected skin becomes hot and swollen and may look slightly pitted, like an orange peel. Fluid-filled blisters, which may be small (vesicles) or large (bullae), sometimes appear on the infected skin. The borders of the affected area are not distinct, except in a form of cellulitis called erysipelas Erysipelas Erysipelas is a superficial form of skin infection ( cellulitis) typically caused by streptococci. (See also Overview of Bacterial Skin Infections.) Erysipelas is most commonly caused by Streptococcus... read more

Most people with cellulitis feel only mildly ill. Some may have a fever, chills, rapid heart rate, headache, low blood pressure, and confusion, which usually indicates a severe infection. 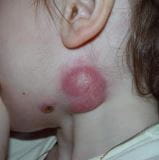 A doctor usually diagnoses cellulitis based on its appearance and the person's symptoms.

Laboratory identification of the bacteria from skin, blood, pus, or tissue specimens (called a culture) usually is not necessary unless a person is seriously ill or has a weakened immune system or the infection is not responding to drug therapy.

When cellulitis affects the same site repeatedly, especially the leg, lymphatic vessels may be damaged, causing permanent swelling of the affected tissue.

Cellulitis can develop again in people who have risk factors such as athlete's foot Athlete's Foot (Tinea Pedis) Athlete’s foot is a dermatophyte (fungal) infection of the skin of the feet. Symptoms of tinea pedis include a build up of scale on the feet and sometimes redness and itching. Doctors base the... read more

(eczema). These disorders should be identified and treated to decrease the likelihood of cellulitis developing again.

Prompt treatment with antibiotics can prevent the bacterial infection from spreading rapidly and reaching the blood and internal organs. Antibiotics that are effective against both streptococci and staphylococci (such as dicloxacillin or cephalexin) are used.

If doctors suspect methicillin-resistant Staphylococcus aureus (MRSA) infection, such as when pus is draining from under the skin or when other serious symptoms develop, treatment may include antibiotics such as trimethoprim with sulfamethoxazole, clindamycin, or doxycycline by mouth.

People with mild cellulitis may take antibiotics by mouth.

People with rapidly spreading cellulitis, high fever, or other evidence of serious infection or who have not been helped by the drugs taken by mouth are hospitalized and given antibiotics by vein. Also, the affected part of the body is kept immobile and elevated to help reduce swelling. Cool, wet dressings applied to the infected area may relieve discomfort. Disorders that increase risk of developing cellulitis in the future (for example, athlete's foot Athlete's Foot (Tinea Pedis) Athlete’s foot is a dermatophyte (fungal) infection of the skin of the feet. Symptoms of tinea pedis include a build up of scale on the feet and sometimes redness and itching. Doctors base the... read more

Symptoms of cellulitis usually disappear after a few days of antibiotic therapy. However, cellulitis symptoms often get worse before they get better, probably because, with the death of the bacteria, substances that cause tissue damage are released. When this release occurs, the body continues to react even though the bacteria are dead. Antibiotics are continued for 10 days or longer even though the symptoms may disappear earlier.

Abscesses Skin abscesses Folliculitis and skin abscesses are pus-filled pockets in the skin resulting from bacterial infection. They may be superficial or deep, affecting just hair follicles or deeper structures within... read more

are cut open and drained.

Compression stockings can help prevent episodes of recurrent cellulitis of one or both legs.

is a spreading bacterial infection of the skin and the tissues immediately under the skin.

Cellulitis involving the soft tissues under the skin is generally not contagious, but it can be somewhat contagious depending on what bacteria is causing the cellulitis and whether there are any blisters, fluid, or pus oozing out, which make it easier to spread.

Cellulitis may itch a bit, but most people usually describe it as uncomfortable or slightly painful.

Cellulitis in the skin most typically appears red, feels warm, and is tender to the touch. The skin may be slightly swollen and pitted like the skin of an orange. Sometimes there are blisters.

Cellulitis is uncomfortable, but most people do not describe severe pain.

How dangerous is cellulitis infection?

The danger of cellulitis varies depending on what type of bacteria are involved, how deep the infection goes, how large the affected area is, and whether the person has any immune system disorder or other serious health problem. Generally, a small patch of cellulitis in a healthy person is not dangerous. Cellulitis that spreads widely or deeply can be life threatening.

How long does cellulitis last?

With treatment, a small patch of cellulitis in a healthy person can resolve in 5 days or so. The more severe the cellulitis and the more medical problems the person has, the longer it can take to resolve. Very severe cellulitis may last 2 weeks or more, even with treatment in the hospital.

Is cellulitis a staph infection?

Cellulitis can be a staph infection. Staph and strep (streptococcus Streptococcal Infections Streptococcal infections are caused by any one of several species of Streptococcus. These gram-positive, sphere-shaped (coccal) bacteria (see figure How Bacteria Shape Up) cause many... read more ) are the two most common causes of cellulitis Causes Cellulitis is a spreading bacterial infection of the skin and the tissues immediately beneath the skin. This infection is most often caused by streptococci or staphylococci. Redness, pain, and... read more

Yes, cellulitis can spread rapidly within the soft tissues under the skin depending on factors such as the type of bacteria causing it and the person's immune system.