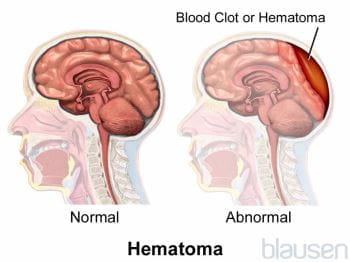 Pockets of Blood in the Brain
Intracranial hematomas are accumulations of blood inside the skull, either within the brain or between the brain and the skull.

Intracranial hematomas usually result from a head injury Overview of Head Injuries Head injuries that involve the brain are particularly concerning. Common causes of head injuries include falls, motor vehicle crashes, assaults, and mishaps during sports and recreational activities... read more but sometimes result from spontaneous bleeding. There are several types of intracranial hematoma, including

. However, because subarachnoid blood usually does not accumulate in one place, it is not considered a hematoma.

can also result from strokes.

Most epidural and intracerebral hematomas and many subdural hematomas develop rapidly and cause symptoms within minutes. Large hematomas press on the brain and may cause swelling and herniation Herniation: The Brain Under Pressure Head injuries that involve the brain are particularly concerning. Common causes of head injuries include falls, motor vehicle crashes, assaults, and mishaps during sports and recreational activities... read more of the brain. Herniation may cause loss of consciousness, coma, paralysis on one or both sides of the body, breathing difficulties, slowing of the heart, and even death.

Some hematomas, particularly subdural hematomas, may develop slowly and cause gradual confusion and memory loss, especially in older people. These symptoms are similar to those of dementia. People may not remember the head injury.

Diagnosis of intracranial hematomas is usually based on results of computed tomography (CT).

Treatment of intracranial hematomas depends on the type and size of the hematoma and how much pressure has built up in the brain.

Epidural hematomas are caused by bleeding from an artery or a large vein (venous sinus) located between the skull and the outer layer of tissue covering the brain. Bleeding often occurs when a skull fracture tears the blood vessel.

Pockets of Blood in the Brain

A severe headache may develop immediately or several hours after the injury. The headache sometimes disappears but returns several hours later, worse than before. Deterioration in consciousness, including increasing confusion, sleepiness, and a deep coma, can quickly follow. Some people lose consciousness after the injury, regain it, and have a period of unimpaired mental function (lucid interval) before consciousness deteriorates again. People may develop paralysis on the side of the body opposite the hematoma, speech or language impairment, or other symptoms, depending on the location of the brain damage Brain Dysfunction by Location Because different areas of the brain control specific functions, the location of brain damage determines the type of dysfunction that results. Which side of the brain is affected is also important... read more .

Early diagnosis of epidural hematomas is crucial and is usually based on results of computed tomography (CT).

Doctors treat epidural hematomas as soon as they are diagnosed. Prompt treatment is necessary to prevent permanent damage. Usually, one or more holes are drilled in the skull to drain the excess blood. The surgeon also seeks the source of the bleeding and stops the bleeding.

Subdural hematomas may be

Acute subdural hematomas can cause swelling in the brain. The hematoma and swelling can result in increased pressure within the skull (intracranial pressure), which can make symptoms worse and increase the risk of dying.

Chronic subdural hematomas are more common among people with alcoholism, older people, and people who take drugs that make blood less likely to clot (anticoagulants or antiplatelets). People with alcoholism and older people, who are relatively prone to falls as well as bleeding, may ignore or forget minor to moderately severe head injuries. These injuries can lead to small subdural hematomas that may become chronic.

By the time symptoms are noticeable, a chronic subdural hematoma may be very large. Chronic hematomas are less likely than acute hematomas to cause a rapid increase of pressure within the skull.

In older people, the brain shrinks slightly, stretching the bridging veins and making them more likely to be torn if an injury, even a minor one, occurs. Also, bleeding tends to continue longer because the shrunken brain exerts less pressure on the bleeding vein, allowing more blood loss from it.

Blood that remains after a subdural hematoma is slowly reabsorbed. After the blood is resorbed from a hematoma, the brain may not re-expand as well in older people as in younger people. As a result, a fluid-filled space (hygroma) may be left. The hygroma may refill with blood or enlarge because small vessels tear, causing repeated bleeding.

Symptoms of a subdural hematoma may include a persistent headache, fluctuating drowsiness, confusion, memory changes, paralysis on the side of the body opposite the hematoma, and speech or language impairment. Other symptoms may occur depending on the location of the brain damage Brain Dysfunction by Location Because different areas of the brain control specific functions, the location of brain damage determines the type of dysfunction that results. Which side of the brain is affected is also important... read more .

) because the skull is soft and pliable. Therefore, pressure within the skull increases less in infants than it does in older children and adults.

Chronic subdural hematomas are more difficult to diagnose because of the length of time between the injury and the development of symptoms. An older person with gradually developing symptoms, such as memory impairment and drowsiness, may be mistakenly thought to have dementia.

Often, small subdural hematomas in adults do not require treatment because the blood is absorbed on its own.

If a subdural hematoma is large and is causing symptoms such as persistent headache, fluctuating drowsiness, confusion, memory changes, and paralysis on the opposite side of the body, doctors usually drain it surgically, sometimes by drilling a small hole in the skull. However, sometimes a larger opening must be made in the skull—for example, when bleeding has occurred very recently or when the blood may be too thick to drain through a small hole. During surgery, a drain is usually inserted and left in place for several days because subdural hematomas can recur. The person is monitored closely for recurrences.

In infants, doctors usually drain the hematoma for cosmetic if for no other reasons.

Fluid accumulation in the damaged brain (cerebral edema) is common. It increases pressure within the skull (intracranial pressure). When pressure within the skull is increased, the brain may get less blood and oxygen. If the pressure is high enough, the brain may be forced through a small natural opening in the relatively rigid sheets of tissue that separate the brain into compartments (brain herniation Herniation: The Brain Under Pressure Head injuries that involve the brain are particularly concerning. Common causes of head injuries include falls, motor vehicle crashes, assaults, and mishaps during sports and recreational activities... read more ). Cerebral edema and its complications account for most deaths.

Surgery is usually avoided because of the following: