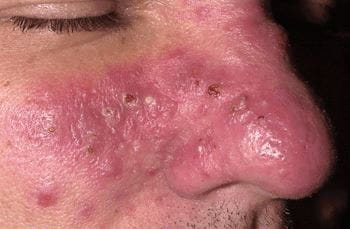 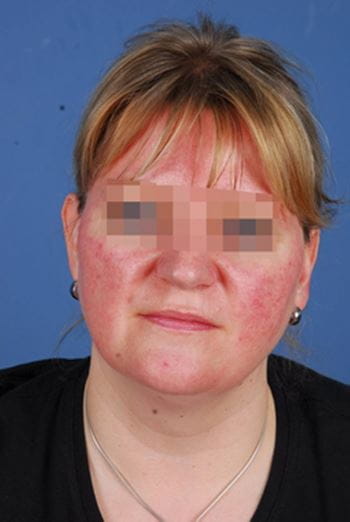 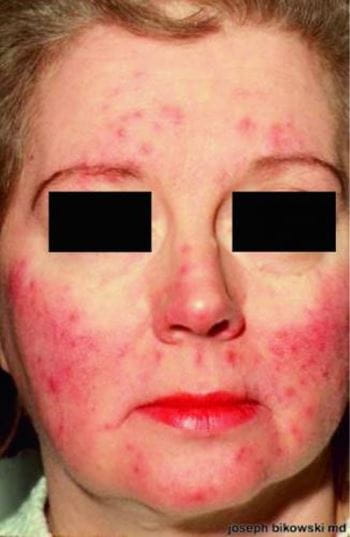 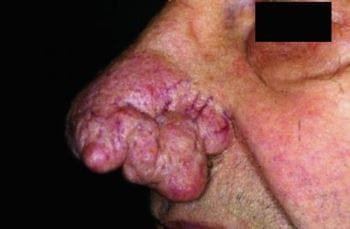 Rosacea most commonly affects patients aged 30 to 50 with fair complexions, most notably those of Irish and Northern European descent, but it affects and is probably under-recognized in darker-skinned patients.

The etiology of rosacea is unknown, but some proposed associations include

Diet plays no consistent role, but some agents (eg, amiodarone, topical and nasal corticosteroids, high doses of B6 and B12) may worsen rosacea.

Symptoms and Signs of Rosacea

Rosacea is limited to the face and scalp and manifests in 4 phases:

In the vascular phase, patients develop facial erythema and edema with multiple telangiectases, possibly as a result of persistent vasomotor instability.

An inflammatory phase often follows, in which sterile papules and pustules (leading to the designation of rosacea as adult acne) develop.

The late phase (developing in some patients), is characterized by coarse tissue hyperplasia of the cheeks and nose (rhinophyma) caused by tissue inflammation, collagen deposition, and sebaceous gland hyperplasia.

The phases of rosacea are usually sequential. Some patients go directly into the inflammatory stage, bypassing the earlier stages. Treatment may cause rosacea to return to an earlier stage. Progression to the late stage is not inevitable.

Ocular rosacea often precedes or accompanies facial rosacea and manifests as some combination of blepharoconjunctivitis, iritis, scleritis, and keratitis, causing itching, foreign body sensation, erythema, and edema of the eye.

Diagnosis of rosacea is based on the characteristic appearance; there are no specific diagnostic tests. The age of onset and absence of comedones help distinguish rosacea from acne.

Differential diagnosis of rosacea includes acne vulgaris Diagnosis Acne vulgaris is the formation of comedones, papules, pustules, nodules, and/or cysts as a result of obstruction and inflammation of pilosebaceous units (hair follicles and their accompanying... read more

, photodermatitis, drug eruptions Drug Eruptions and Reactions Drugs can cause multiple skin eruptions and reactions. The most serious of these are discussed elsewhere in THE MANUAL and include Stevens-Johnson syndrome and toxic epidermal necrolysis, hypersensitivity... read more

Primary initial treatment of rosacea involves avoidance of triggers (including use of sunscreen). Antibiotics and/or azelaic acid may be used for inflammatory disease. The objective of treatment is control of symptoms, not cure. See the Canadian clinical practice guidelines for rosacea.

Metronidazole cream (1%), lotion (0.75%), or gel (0.75%) and azelaic acid 20% cream, applied 2 times a day, are equally effective; 2.5% benzoyl peroxide in any form (eg, gel, lotion, cream), applied once a day or 2 times a day, can be added for improved control. Less effective alternatives include sodium sulfacetamide 10%/sulfur 5% lotion; clindamycin 1% solution, gel, or lotion; and erythromycin 2% solution, all applied 2 times a day. Many patients require indefinite treatment for long-term control. Topical ivermectin 1% cream also has efficacy in the treatment of inflammatory lesions of rosacea.

Persistent erythema or flushing may be treated with the topical alpha-2-selective adrenergic agonist brimonidine 0.33% gel applied once a day and or with the primarily alpha-1a agonist oxymetazoline hydrochloride 1% cream applied once a day (1 Treatment reference Rosacea is a chronic inflammatory disorder characterized by facial flushing, telangiectasias, erythema, papules, pustules, and, in severe cases, rhinophyma. Diagnosis is based on the characteristic... read more

Techniques for treatment of rhinophyma include dermabrasion and tissue excision; cosmetic results are good.

Techniques for treatment of telangiectasia include laser and electrocautery.