Full review/revision Nov 2022
VIEW PROFESSIONAL VERSION
GET THE QUICK FACTS
Topic Resources
Diverticulitis is inflammation of one or more balloon-like sacs (diverticula). Infection may or may not develop.

Diverticula in the large intestine Large Intestine The large intestine consists of the Cecum and ascending (right) colon Transverse colon Descending (left) colon Sigmoid colon (which is connected to the rectum) read more occur when a defect develops in the thick, muscular middle layer of the bowel. The thin inner layers of the bowel bulge out through the defect and create a small sac. One sac is a diverticulum. 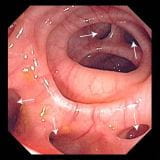 when a diverticulum develops a small (sometimes microscopic) hole that allows bacteria from the intestines to be released. Some doctors think that a diverticulum can become inflamed even if a hole has not developed. Diverticulitis most commonly affects the sigmoid colon, which is the last part of the large intestine just before the rectum.

Doctors think there may be a connection between diverticulitis and the amount of red meat people eat per week, whether they smoke, and whether they have obesity. The use of nonsteroidal anti-inflammatory drugs (including aspirin), acetaminophen, corticosteroids, and opioids also increases the risk of diverticulosis and diverticulitis.

Diverticulitis is not caused by eating nuts, seeds, corn, or popcorn. 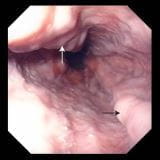 Complications of diverticulitis include

A fistula is an abnormal channel connecting one organ with another or with the skin. Intestinal inflammation from diverticulitis can lead to the development of fistulas that connect the large intestine with other organs.

Most fistulas form between the sigmoid colon and the bladder. These fistulas are more common among men than women, although women who have had a hysterectomy Treatment The most common type of cancer of the uterus develops in the lining of the uterus (endometrium) and is called endometrial cancer. Endometrial cancer usually affects women after menopause. It... read more

(removal of the uterus) are at increased risk because the large intestine and bladder are no longer separated by the uterus. When fistulas form between the large intestine and bladder, intestinal contents, including normal bacteria, enter the bladder and cause urinary tract infections Overview of Urinary Tract Infections (UTIs) In healthy people, urine in the bladder is sterile—no bacteria or other infectious organisms are present. The tube that carries urine from the bladder out of the body (urethra) contains no bacteria... read more .

Less commonly, a fistula can develop between the large intestine and the small intestine, uterus, vagina, abdominal wall, or even the thigh.

Peritonitis Peritonitis Abdominal pain is common and often minor. Severe abdominal pain that comes on quickly, however, almost always indicates a significant problem. The pain may be the only sign of the need for surgery... read more is infection of the abdominal cavity, which can develop if the wall of a diverticulum ruptures.

Other possible complications of diverticulitis include inflammation of nearby organs (such as the uterus, bladder, or other areas of the digestive tract). Repeated bouts of diverticulitis can lead to narrowing (stricture) of the colon because the resulting scarring and muscle thickening can narrow the inside of the large intestine and prevent solid stool from passing through.

, a diverticulitis diagnosis may be based almost entirely on the symptoms. However, many other conditions involving the large intestine and other organs in the abdomen and pelvis can cause symptoms similar to diverticulitis, including appendicitis Diagnosis Appendicitis is inflammation and infection of the appendix. Often a blockage inside the appendix causes the appendix to become inflamed and infected. Abdominal pain, nausea, and fever are common... read more , colon cancer Colorectal Cancer Family history and some dietary factors (low fiber, high fat) increase a person’s risk of colorectal cancer. Typical symptoms include bleeding during a bowel movement, fatigue, and weakness... read more

or ovarian cancer Diagnosis Ovarian cancer is cancer of the ovaries. It is related to fallopian tube cancer, which develops in the tubes that lead from the ovaries to the uterus, and peritoneal cancer, which is cancer... read more , an abscess Diagnosis An abscess is a pocket of pus, usually caused by a bacterial infection. Most people have constant abdominal pain and a fever. Computed tomography or another imaging test can distinguish an abscess... read more not related to diverticulitis, and noncancerous (benign) growths on the wall of the uterus (uterine fibroids Diagnosis A fibroid is a noncancerous tumor composed of muscle and fibrous tissue. It is located in the uterus. Fibroids can cause pain, abnormal vaginal bleeding, constipation, repeated miscarriages... read more

of the abdomen and pelvis may be helpful in determining that the problem is diverticulitis and not appendicitis or another diagnosis. Magnetic resonance imaging Computed Tomography and Magnetic Resonance Imaging of the Digestive Tract Computed tomography (CT— see also Computed Tomography (CT)) and magnetic resonance imaging (MRI— see also Magnetic Resonance Imaging (MRI)) scans are good tools for assessing the size and location... read more (MRI) is an alternative test for pregnant women or young people.

Once inflammation has subsided or the infection has been treated, a doctor may do a colonoscopy Endoscopy Endoscopy is an examination of internal structures using a flexible viewing tube (endoscope). Endoscopy can also be used to treat many disorders because doctors are able to pass instruments... read more (an examination of the large intestine using a flexible viewing tube) to rule out colon cancer. The colonoscopy may be done if people have complications (such as a perforation or abscess) or if they have risk factors for cancer (such as narrowed stool, bleeding, anemia, weight loss, or a family history of colon cancer). Colonoscopy usually needs to be delayed for 1 to 3 months after treatment because it can damage or rupture an inflamed intestine. Exploratory surgery is rarely needed to confirm the diagnosis.

Severe diverticulitis requires different treatment. People who have severe symptoms, such as abdominal pain, body temperature above 101° F (38.3° C), and other evidence of serious infection or complications, are hospitalized. In the hospital, people are given fluids and antibiotics by vein (intravenously), kept on bed rest, and given nothing by mouth until the symptoms subside. People stay in the hospital until their symptoms go away. They can then eat soft foods. Once the episode has ended, people can eat high-fiber foods. To decrease the risk of recurrence, people should avoid using nonsteroidal anti-inflammatory drugs (NSAIDs).

After 1 to 3 months, people have a colonoscopy to evaluate the colon.

For some people, including those who have small abscesses, rest and sometimes antibiotics are all that are needed to treat severe diverticulitis.

Larger abscesses and abscesses that do not go away with only antibiotics or are getting worse are drained with a needle inserted through the skin and guided by a CT scan Computed Tomography and Magnetic Resonance Imaging of the Digestive Tract Computed tomography (CT— see also Computed Tomography (CT)) and magnetic resonance imaging (MRI— see also Magnetic Resonance Imaging (MRI)) scans are good tools for assessing the size and location... read more or an endoscopic ultrasound Ultrasound Scanning (Ultrasonography) of the Abdomen Ultrasound scanning uses sound waves to produce pictures of internal organs ( see also Ultrasonography). An ultrasound scan can show the size and shape of many organs, such as the liver and... read more

If drainage helps, people remain in the hospital until symptoms have been relieved and they have resumed a soft diet. If drainage does not help, people need surgery.

Emergency surgery is necessary for people whose intestine has ruptured or who have peritonitis. Other people who need surgery include those who have severe diverticulitis symptoms that are not relieved by nonsurgical treatment (such as antibiotics) within 3 to 5 days. People who have increasing pain, tenderness, and fever also need surgery.

The surgeon removes the involved section of the intestine. The ends are rejoined immediately in healthy people who do not have a perforation, abscess, or severe intestinal inflammation. Other people need a temporary colostomy.

A colostomy is an opening between the large intestine and the skin surface. About 10 to 12 weeks later (or sometimes longer), after the inflammation has gone away and the person's condition has improved, the cut ends of the intestine are rejoined during a follow-up operation, and the colostomy is closed.

Fistula treatment involves removing the section of large intestine where the fistula begins, rejoining the cut ends of the large intestine, and repairing the other affected area (for example, the bladder or small intestine).

Sometimes, after talking with their doctor, people choose to have elective surgery (surgery that is not needed immediately and can be put off for some time) to manage their diverticular disease. Elective surgery is typically considered for people who have had multiple attacks of diverticulitis or for those who have a complication such as narrowing of the colon due to scarring.

Diverticulitis is inflammation, with or without infection, of one or more balloon-like sacs (diverticula) that can develop in the large intestine. Diverticulitis causes abdominal pain, tenderness, and sometimes fever.

How do you treat diverticulitis?

People with mild diverticulitis are treated with rest and sometimes antibiotics by mouth. Those with severe symptoms are hospitalized for treatment with intravenous (IV) antibiotics and sometimes drainage of pus using a needle or doing surgery to remove the affected segment of intestine.

What foods should you avoid with diverticulitis?

When diverticulitis flares up, people need to rest their bowels (intestines). For mild cases, no dietary restrictions are necessary, but people with a severe flare-up should not eat or drink anything until the attack is under control. Doctors no longer think that diverticulitis is caused by eating small, hard-to-digest things such as nuts, seeds, corn, or popcorn, so people do not have to avoid any particular food between attacks.

How do you get diverticulitis?

Doctors are not sure why diverticula get inflamed in some people and not in others.

No, diverticulitis is not contagious.

What is the difference between diverticulitis and diverticulosis?

Diverticulosis is the presence of one or more balloon-like sacs (diverticula), usually in the large intestine. Diverticulosis usually causes no symptoms. Diverticulitis occurs when one of those diverticula becomes inflamed, causing symptoms of abdominal pain, tenderness, and sometimes fever.

Can diverticulitis be cured?

An attack of diverticulitis usually resolves completely. Some people never have another attack, but others get another attack in the same or in a different part of their intestine.

Overview of the Esophagus