Overview of Wolff-Parkinson-White Syndrome
Reentrant supraventricular tachycardias (SVT) involve reentrant pathways with a component above the bifurcation of the His bundle. Patients have sudden episodes of palpitations that begin and terminate abruptly; some have dyspnea or chest discomfort. Diagnosis is clinical and by electrocardiography. Initial treatment is usually with vagotonic maneuvers. If these maneuvers are ineffective, treat with IV adenosine or nondihydropyridine calcium channel blockers for narrow QRS rhythms or for wide QRS rhythms known to be a reentrant SVT with aberrant conduction that requires atrioventricular nodal conduction. Procainamide or amiodarone are effective for other wide QRS rhythms. Synchronized cardioversion can be done for all cases in which drugs are ineffective or there is hemodynamic instability.

) in supraventricular tachycardia is within the

AV nodal reentrant tachycardia occurs most often in otherwise healthy patients. It is most commonly triggered by an atrial premature beat Atrial premature beats Various rhythms result from supraventricular foci (usually in the atria). Diagnosis is by electrocardiography. Many are asymptomatic and require no treatment. (See also Overview of Arrhythmias... read more 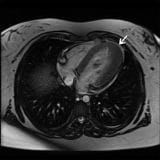 In classic (or manifest) WPW syndrome, antegrade conduction occurs over both the accessory pathway and the normal conducting system during sinus rhythm. The accessory pathway, being faster, depolarizes some of the ventricle early, resulting in a short PR interval and a slurred upstroke to the QRS complex (delta wave—see figure Classic Wolff-Parkinson-White syndrome Classic Wolff-Parkinson-White (WPW) syndrome Reentrant supraventricular tachycardias (SVT) involve reentrant pathways with a component above the bifurcation of the His bundle. Patients have sudden episodes of palpitations that begin and... read more ).

The delta wave prolongs QRS duration to > 0.12 second, although the overall configuration, apart from the delta wave, may appear normal. Depending on the orientation of the delta wave, a pseudoinfarction pattern Q-wave may be present. Because the early depolarized parts of the ventricle also repolarize early, the T-wave vector may be abnormal.

In concealed WPW syndrome, the accessory pathway does not conduct in an antegrade direction; consequently, the above electrocardiographic (ECG) abnormalities do not appear. However, it conducts in a retrograde direction and thus can participate in reentrant tachycardia.

In the most common form of reentrant tachycardia (called orthodromic reciprocating tachycardia), the circuit uses the normal atrioventricular (AV) conduction pathway to activate the ventricles, returning to the atrium via the accessory AV connection. The resultant QRS complex is thus narrow (unless bundle branch block Bundle Branch Block and Fascicular Block Bundle branch block is partial or complete interruption of impulse conduction in a bundle branch; fascicular block is similar interruption in a hemifascicle of the bundle. The 2 disorders often... read more coexists) and without a delta wave. Orthodromic reciprocating tachycardia is typically a short RP tachycardia with the retrograde P wave in the ST segment.

Tachycardias in WPW syndrome may begin as or degenerate into atrial fibrillation Atrial Fibrillation and Wolff-Parkinson-White Syndrome (WPW) In Wolff-Parkinson-White syndrome, antegrade conduction occurs over an accessory pathway. If atrial fibrillation, develops this is a medical emergency as very rapid ventricular rates can develop... read more (AF), which can be very dangerous. Enlarged atria due to hypertrophic cardiomyopathy Hypertrophic Cardiomyopathy Hypertrophic cardiomyopathy is a congenital or acquired disorder characterized by marked ventricular hypertrophy with diastolic dysfunction but without increased afterload (eg, due to valvular... read more

and other forms of cardiomyopathy makes patients with WPW syndrome more prone to atrial fibrillation.

Symptoms and Signs of Reentrant SVTs

Infants present with episodic breathlessness, lethargy, feeding problems, or rapid precordial pulsations. If the episode of tachycardia is protracted, infants may present with heart failure Heart failure Congenital heart disease is the most common congenital anomaly, occurring in almost 1% of live births (1). Among birth defects, congenital heart disease is the leading cause of infant mortality... read more

Examination is usually unremarkable except for a heart rate of 160 to 240 beats/minute.

P waves vary. In most cases of AV node reentry, retrograde P waves are in the terminal portion of the QRS complex (often producing a pseudo-R′ deflection in lead V1); about one third occur just after the QRS complex, and very few occur before. P waves always follow the QRS complex in orthodromic reciprocating tachycardia of WPW syndrome.

QRS complex is narrow except with coexisting bundle branch block, antidromic tachycardia, or dual accessory connection reciprocating tachycardia. Wide-complex tachycardia must be distinguished from ventricular tachycardia (see table Indications for Implantable Cardioverter-Defibrillators Indications for Implantable Cardioverter-Defibrillators in Ventricular Tachycardia and Ventricular Fibrillation The need for treatment of arrhythmias depends on the symptoms and the seriousness of the arrhythmia. Treatment is directed at causes. If necessary, direct antiarrhythmic therapy, including antiarrhythmic... read more 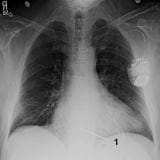 Many episodes stop spontaneously before treatment.

AV node blockers are used if vagotonic maneuvers are ineffective and the QRS complex is narrow (indicating orthodromic conduction); blocking conduction through the AV node for one beat interrupts the reentrant cycle. Adenosine is the first choice. Dose is 6 mg by rapid IV bolus (0.05 to 0.1 mg/kg in children), followed by a 20-mL saline bolus. If this dosage is ineffective, 2 subsequent 12-mg doses are given every 5 minutes. Adenosine sometimes causes a brief (2- to 3-second) period of cardiac standstill, which may distress patient and physician. Verapamil 5 mg IV or diltiazem 0.25 to 0.35 mg/kg IV are alternatives.

For a regular, wide QRS complex tachycardia known to be an antidromic reciprocating tachycardia not involving double accessory pathways (which must be identified by the history; they cannot be established acutely), AV nodal blockers may also be effective. However, if the mechanism of the tachycardia is unknown and ventricular tachycardia has not been excluded, AV nodal blockers should be avoided because they may worsen ventricular tachycardias. In such cases (or those in which drugs are ineffective), IV procainamide or amiodarone can be used. Alternatively, synchronized cardioversion Cardiac Resynchronization Therapy (CRT) The need for treatment of arrhythmias depends on the symptoms and the seriousness of the arrhythmia. Treatment is directed at causes. If necessary, direct antiarrhythmic therapy, including antiarrhythmic... read more with 50 joules (0.5 to 2 joules/kg for children) is quick and safe and may be preferred to these more toxic drugs.

Merck & Co., Inc., Kenilworth, NJ, USA (known as MSD outside of the US and Canada) is a global healthcare leader working to help the world be well. From developing new therapies that treat and prevent disease to helping people in need, we are committed to improving health and well-being around the world.  The Manual was first published as the Merck Manual in 1899 as a service to the community. The legacy of this great resource continues as the MSD Manual outside of North America. Learn more about our commitment to Global Medical Knowledge.