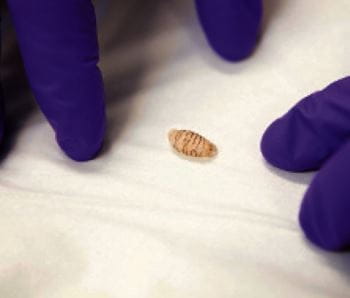 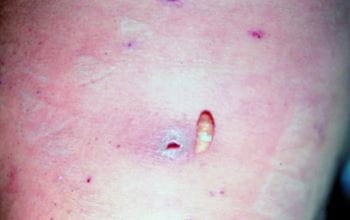 Parasites Overview of Parasitic Infections A parasite is an organism that lives on or inside another organism (the host) and benefits (for example, by getting nutrients) from the host at the host's expense. Although this definition actually... read more are organisms that live on or inside another organism (the host) and depend on the host for nutrition to live. Some species of flies lay their eggs on other insects or on objects that may come into contact with people’s skin. Some flies deposit their eggs in or near a wound or sore. The eggs hatch and become larvae, which are parasites that can burrow into skin.

There are three main types of skin infestation by fly larvae:

The disorders vary depending on the species of fly involved. These infestations usually occur in tropical countries. People in the United States who have myiasis usually have recently arrived from or visited a tropical country.

Many of the flies that cause furuncular myiasis are commonly known as bot flies. The most well-known species of flies that cause furuncular myiasis come from South and Central America and sub-Saharan and tropical Africa. Other species come from North America, Europe, and Pakistan. Many of the flies do not lay eggs on humans. Instead, the flies lay their eggs on other insects (such as mosquitoes) or on objects (such as drying laundry) that may come into contact with people’s skin.

Eggs hatch into larvae, which burrow into the skin and develop into mature larvae. The mature larvae are up to ½ to 1 inch (about 1.3 to 2.5 centimeters) long, depending on the species. If people are not treated, the larvae eventually emerge from the skin and drop to the ground to continue their life cycle.

Typical symptoms of furuncular myiasis include itching, a sensation of movement, and sometimes sharp, stabbing pain. At first, people have a small red bump that may resemble a common insect bite or the beginning of a pimple (furuncle). Later, the bump enlarges, and a small opening may be visible at the center. The opening may drain clear, yellowish fluid, and sometimes a small portion of the end of the larva is visible.

Because larvae require oxygen, blocking the skin opening may cause them to leave or at least come closer to the surface. When they are closer to the surface, it is easier to pull them out. To block the skin opening, some people apply petroleum jelly, nail polish, or even bacon or a paste of tobacco. Larvae that die before being removed are harder to get out and often cause an intense inflammatory reaction.

Sometimes doctors inject an anesthetic into the skin, make a small incision, and pull the larva out with forceps. The drug ivermectin, given by mouth or applied to the skin, also may kill the larva or cause it to leave.

Open wounds, typically in homeless people, alcoholics, and others in poor social circumstances, may become infested with fly larvae. The tissues that line the mouth, nose, or eyes (mucosa) may also become infested. The most common flies are green or black blowflies. Unlike the larvae (maggots) of common houseflies, most larvae that cause wound myiasis invade healthy as well as dead tissue.

Doctors remove the larvae by flushing the wounds and pulling the larvae out. Doctors also cut away any dead tissue.

The treatment of migratory myiasis is the same as for furuncular myiasis Furuncular myiasis Cutaneous myiasis is a parasitic skin infestation caused by the larvae (maggots) of certain fly species. Parasites are organisms that live on or inside another organism (the host) and depend... read more