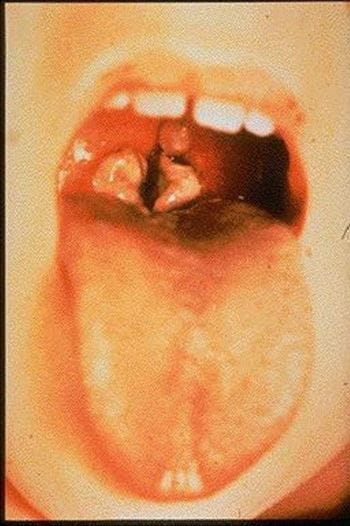 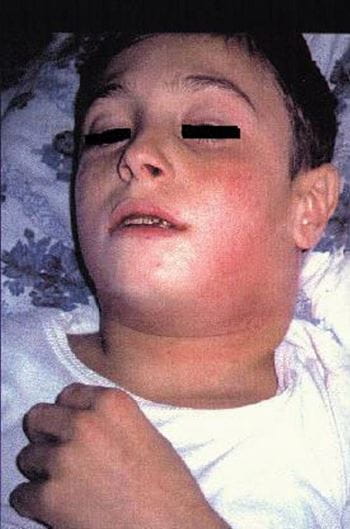 Swollen Neck Due to Diphtheria 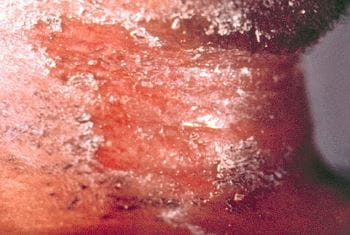 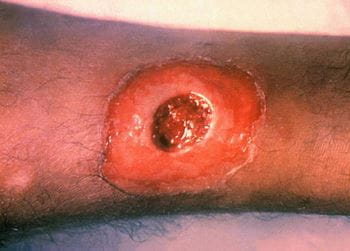 Open Sore Due to Diphtheria
Diphtheria is a contagious, sometimes fatal infection of the upper respiratory tract caused by the gram-positive Overview of Gram-Positive Bacteria Gram-positive bacteria are classified by the color they turn after a chemical called Gram stain is applied to them. Gram-positive bacteria stain blue when this stain is applied to them. Other... read more , rod-shaped bacteria (see figure How Bacteria Shape Up How Bacteria Shape Up Bacteria are microscopic, single-celled organisms. They are among the earliest known life forms on earth. There are thousands of different kinds of bacteria, and they live in every conceivable... read more ) Corynebacterium diphtheriae. Some types of Corynebacterium diphtheriae release a potent toxin that can damage the heart, kidneys, and nervous system.

Years ago, diphtheria was one of the leading causes of death among children. Today, diphtheria is rare in developed countries, primarily because of widespread vaccination. Fewer than five cases occur in the United States each year, but diphtheria bacteria still exist in the world and can cause outbreaks if vaccination is inadequate. Diphtheria is common in many countries in Asia, the South Pacific, the Middle East, and Eastern Europe and in Haiti and the Dominican Republic. Outbreaks in Indonesia, Thailand, Laos, South Africa, Sudan, and Pakistan have occurred since 2011 (travel information about diphtheria is available at the Centers for Disease Control and Prevention [CDC] web site).

The bacteria that cause diphtheria are usually spread in droplets of moisture coughed into the air. Usually, the bacteria multiply on or near the surface of the mucous membranes of the mouth or throat, where they cause inflammation. This form of diphtheria is called respiratory diphtheria.

Some types of Corynebacterium diphtheriae release a potent toxin, which can damage the heart, kidneys, and nervous system.

A milder form of diphtheria affects only the skin and occurs mainly in adults. This form is more common among people with poor hygiene (for example, homeless people). It spreads through contact with infected skin sores.

The illness typically begins a few days (an average of 5 days) after exposure to the bacteria. Diphtheria symptoms then begin over a few days, with sore throat, painful swallowing, hoarseness, a general feeling of illness (malaise), and a low-grade fever (about 100.4 to 102° F, or 38 to 38.9° C). Children may also have a fast heart rate, nausea, vomiting, chills, and a headache. The lymph nodes in the neck may swell (called bull neck). The inflammation may make the throat swell, narrowing the airway and making breathing extremely difficult.

A pseudomembrane forms near the tonsils or other parts of the throat. This membrane is a tough, gray sheet of material made by the bacteria. It is composed of dead white blood cells, bacteria, and other substances. The pseudomembrane narrows the airway. The roof of the mouth may be paralyzed. When inhaling, the pseudomembrane may cause people to make a noisy gasping sound. Also, the pseudomembrane may extend into the windpipe or airway or suddenly become detached and block the airway completely. As a result, people may be unable to breathe.

The toxin produced by certain types of diphtheria bacteria sometimes affects certain nerves, particularly those to the muscles of the face, throat, arms, and legs, causing symptoms such as difficulty swallowing or moving the eyes, arms, or legs. The diaphragm (the most important muscle used for inhaling) may become paralyzed, sometimes causing respiratory failure Respiratory Failure Respiratory failure is a condition in which the level of oxygen in the blood becomes dangerously low or the level of carbon dioxide in the blood becomes dangerously high. Conditions that block... read more . These symptoms take weeks to resolve. Toxin effects on nerves can result in rapid heart rate, an abnormal heart rhythm, and low blood pressure. The bacterial toxin may also cause inflammation of the heart muscle (myocarditis Myocarditis Myocarditis is inflammation of the muscle tissue of the heart (myocardium) that causes tissue death. Myocarditis may be caused by many disorders, including infection, toxins and drugs that affect... read more ), sometimes leading to abnormal heart rhythms, heart failure, and death.

If diphtheria affects only the skin, it causes what look like scrapes (abrasions) and sores that vary in appearance. These sores appear on the arms and legs and resemble other skin disorders, such as eczema, psoriasis, and impetigo. A few people have open sores that do not heal. Sores may be painful and red and may ooze.

Overall, about 3% of people with diphtheria die. The risk of dying is increased if

A doctor suspects diphtheria in a sick person who has a sore throat with a pseudomembrane, particularly if the roof of the mouth is paralyzed and if the person was not vaccinated. The diagnosis is confirmed by sending a sample of material from the person's throat to a laboratory where bacteria can be grown (cultured).

Doctors suspect skin diphtheria when people develop sores during an outbreak of respiratory diphtheria. To confirm the diagnosis, doctors take a sample from a sore and send it to a laboratory to be cultured.

For more information, see also Diphtheria-Tetanus-Pertussis Vaccine Diphtheria-Tetanus-Pertussis Vaccine The diphtheria, tetanus, and pertussis vaccine is a combination vaccine that protects against these three diseases: Diphtheria usually causes inflammation of the throat and mucous membranes... read more and the vaccine schedules for children and adults from the Centers for Disease Control and Prevention (CDC).

After exposure to diphtheria

If people have close contact with a person who has diphtheria, they are tested for the infection and given antibiotics for 7 days. Samples from their throat and nose are sent to a laboratory to be cultured. If diphtheria bacteria are identified in the samples, these people must take antibiotics for an additional 10 days (for a total of 17 days). This exposure regimen is done whether or not people have been vaccinated because vaccinated people can still become infected with diphtheria.

People who have symptoms of respiratory diphtheria are typically hospitalized in an intensive care unit (ICU) Types of units People who need specific types of care may be put in special care units. Intensive care units (ICUs) are for people who are seriously ill. These people include those who have had a sudden, general... read more and given antibodies (antitoxin) by injection to neutralize the diphtheria toxin.

Doctors also give antibiotics, such as penicillin or erythromycin, to kill the diphtheria bacteria. Antibiotics are given for 14 days. People must be kept in isolation (to prevent other people from being exposed to infected secretions) until two cultures, taken after the antibiotics are stopped, confirm that the bacteria have been killed.

For skin diphtheria, doctors thoroughly clean sores with soap and water, and people are given antibiotics for 10 days.

People who have recovered from diphtheria must be vaccinated Prevention Diphtheria is a contagious, sometimes fatal infection of the upper respiratory tract caused by the gram-positive, rod-shaped bacteria (see figure How Bacteria Shape Up) Corynebacterium diphtheriae... read more

because infection does not guarantee immunity. People can get this infection more than once.

People who have had a severe infection recover slowly. They are advised not to resume activities too soon. If the heart was affected, even normal physical exertion may be harmful.