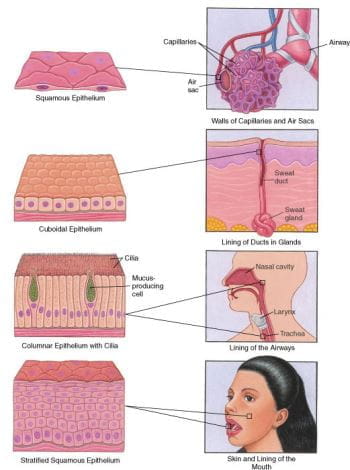 Often thought of as the smallest unit of a living organism, a cell is made up of many even smaller parts, each with its own function. Human cells vary in size, but all are quite small. Even the largest, a fertilized egg, is too small to be seen with the naked eye.

Human cells have a surface membrane (called the cell membrane) that holds the contents together. However, this membrane is not just a sac. It has receptors that identify the cell to other cells. The receptors also react to substances produced in the body and to drugs taken into the body, selectively allowing these substances or drugs to enter and leave the cell (see Receptors on Cells Receptors on Cells After being swallowed, injected, inhaled, or absorbed through the skin, mucosa under the tongue, or mucosa inside the cheek, most drugs enter the bloodstream and circulate throughout the body... read more ). Reactions that take place at the receptors often alter or control a cell's functions. An example of this is when insulin binds to receptors on the cell membrane to maintain appropriate blood sugar levels and to allow glucose to enter cells.

The nucleus contains the cell's genetic material and the structures that control cell division and reproduction.

Mitochondria are tiny structures inside every cell that provide the cell with energy.

Some cells, especially glandular cells, have as their primary function the production of complex substances, such as a hormone or an enzyme. For example, some cells in the breast produce milk, some in the pancreas produce insulin, some in the lining of the lungs produce mucus, and some in the mouth produce saliva. Other cells have primary functions that are not related to the production of substances. For example, muscle cells contract, allowing movement. Nerve cells generate and conduct electrical impulses, allowing communication between the central nervous system (brain and spinal cord) and the rest of the body.

In addition to human cells, the human body has microorganisms that live on the skin and in the airways, mouth, and digestive, reproductive, and urinary tracts without causing any harm. The microorganisms that usually occupy a particular body site are called the resident flora Resident Flora Healthy people live in harmony with most of the microorganisms that establish themselves on or in (colonize) nonsterile parts of the body, such as the skin, nose, mouth, throat, large intestine... read more , or the microbiome. Many resident flora are actually helpful to people—for example, by helping them digest food or by preventing the growth of other, more dangerous bacteria.