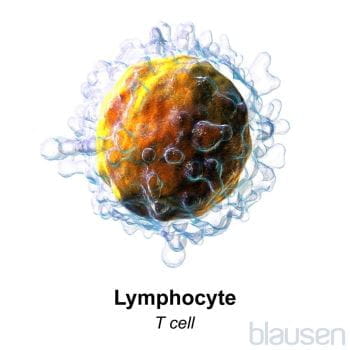 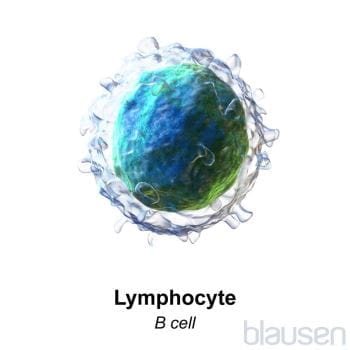 The Thymus and T Cells

This defense has two parts:

Acquired (adaptive or specific) immunity is not present at birth. It is learned. The learning process starts when a person’s immune system encounters foreign invaders and recognizes nonself substances (antigens). Then, the components of acquired immunity learn the best way to attack each antigen and begin to develop a memory for that antigen. Acquired immunity is also called specific immunity because it tailors its attack to a specific antigen previously encountered. Its hallmarks are its ability to learn, adapt, and remember.

Acquired immunity takes time to develop after first exposure to a new antigen. However afterward, the antigen is remembered, and subsequent responses to that antigen are quicker and more effective than those that occurred after the first exposure.

The white blood cells responsible for acquired immunity are

Other participants in acquired immunity are

Lymphocytes enable the body to remember antigens and to distinguish self from harmful nonself (including viruses and bacteria). Lymphocytes circulate in the bloodstream and lymphatic system Lymphatic System: Helping Defend Against Infection

and move into tissues as needed.

The immune system can remember every antigen encountered because after an encounter, some lymphocytes develop into memory cells. These cells live a long time—for years or even decades. When memory cells encounter an antigen for the second time, they recognize it immediately and respond quickly, vigorously, and specifically to that particular antigen. This specific immune response is the reason that people do not contract chickenpox or measles more than once and that vaccination can prevent certain disorders.

Lymphocytes may be T cells or B cells. T cells and B cells work together to destroy invaders.

T cells develop from stem cells in the bone marrow that have travelled to an organ in the chest called the thymus. There, they learn how to distinguish self from nonself antigens so that they do not attack the body's own tissues. Normally, only the T cells that learn to ignore the body's own antigens (self-antigens) are allowed to mature and leave the thymus.

Mature T cells are stored in secondary lymphoid organs (lymph nodes, spleen, tonsils, appendix, and Peyer patches in the small intestine). These cells circulate in the bloodstream and the lymphatic system. After they first encounter an infected or abnormal cell, they are activated and search for those particular cells.

Usually, to be activated, T cells require the help of another immune cell, which breaks antigens into fragments (called antigen processing Recognition ) and then presents antigen from the infected or abnormal cell to the T cell. The T cell then multiplies and specializes into different types of T cells. These types include

When T cells initially encounter an antigen, most of them perform their designated function, but some of them develop into memory cells, which remember the antigen and respond to it more vigorously when they encounter it again.

B cells are formed in the bone marrow. B cells have particular sites (receptors) on their surface where antigens can attach. B cells can learn to recognize an almost limitless number of different antigens.

The main purpose of B cells is to produce antibodies, which tag an antigen for attack or directly neutralize it. B cells can also present antigen to T cells, which then become activated.

The B-cell response to antigens has two stages:

After T and B cells are presented with the antigen, they become activated.

When a B cell encounters an antigen, it is stimulated to mature into a plasma cell or a memory B cell. Plasma cells then release antibodies (also called immunoglobulins, or Ig). There are 5 classes of antibodies—IgM, IgG, IgA, IgE, and IgD.

Antibodies protect the body in the following ways:

Antibodies are essential for fighting off certain types of bacterial and fungal infections. They can also help fight viruses.

Each antibody molecule has two parts:

An antibody can switch its constant part and become a different class, but its variable part does not change. Thus, it can always recognize the specific antigen that it was formed to attach to.

This class of antibody is produced when a particular antigen (such as an antigen of an infectious microorganism) is encountered for the first time. The response triggered by the first encounter with an antigen is the primary immune response. IgM then attaches to the antigen, activating the complement system, and thus makes the microorganism easier to ingest.

Normally, IgM is present in the bloodstream but not in the tissues.

IgG is present in the bloodstream and tissues. It is the only class of antibody that crosses the placenta from mother to fetus. The mother’s IgG protects the fetus and infant until the infant’s immune system can produce its own antibodies.

These antibodies help defend against the invasion of microorganisms through body surfaces lined with a mucous membrane, including those of the nose, eyes, lungs, and digestive tract.

IgA is present in the following:

Small amounts of IgE are present in the bloodstream and mucus of the digestive system. These amounts are higher in people with asthma, hay fever, other allergic disorders, or parasitic infections.

IgD is present mainly on the surface of immature B cells. It helps these cells mature.

Different types of invading microorganisms are attacked and destroyed in different ways.

Some microorganisms are directly recognized, ingested, and destroyed by cells that ingest these invaders (phagocytes), such as neutrophils and macrophages.

Some microorganisms cannot be completely eliminated. To defend against these microorganisms, the immune system builds a wall around them. The wall is formed when phagocytes, particularly macrophages, adhere to each other. The wall around the microorganisms is called a granuloma. Some bacteria thus imprisoned may survive in the body indefinitely. If the immune system is weakened (even 50 or 60 years later), the walls of the granuloma may crumble, and the bacteria may start to multiply, causing symptoms.

Effects of Aging on the Immune System
Others also read

Overview of the Immune System