Giant cell arteritis is a relatively common form of vasculitis in the US and Europe. Incidence varies depending on ethnic background. Autopsy studies suggest that the disorder may be more common than is clinically apparent. Women are affected more often. Mean age at onset is about 70, with a range of 50 to > 90. About 40 to 60% of patients with giant cell arteritis have symptoms of polymyalgia rheumatica Polymyalgia Rheumatica Polymyalgia rheumatica is a syndrome closely associated with giant cell arteritis (temporal arteritis). It affects adults > 55. It typically causes severe pain and stiffness in proximal muscles... read more . The intracranial vessels are usually not affected.

Vasculitis may be localized, multifocal, or widespread. The disorder tends to affect arteries containing elastic tissue, most often the temporal, cranial, or other carotid system arteries. The aortic arch branches, coronary arteries, and peripheral arteries can also be affected. Mononuclear cell infiltrates in the adventitia form granulomas containing activated T cells and macrophages. Multinucleated giant cells, when present, cluster near the disrupted elastic lamina. The intimal layer is markedly thickened, with concentric narrowing and occlusion of the lumen.

Symptoms of giant cell arteritis may begin gradually over several weeks or abruptly.

Patients may present with systemic symptoms such as fever (usually low-grade), fatigue, malaise, unexplained weight loss, and sweats. Some patients are initially diagnosed as having fever of unknown origin. Eventually, most patients develop symptoms related to the affected arteries.

Severe, sometimes throbbing headache (temporal, occipital, frontal, or diffuse) is the most common symptom. It may be accompanied by scalp pain elicited by touching the scalp or combing the hair.

Visual disturbances include diplopia, scotomas, ptosis, blurred vision, and loss of vision (which is an ominous sign). Brief periods of partial or complete vision loss (amaurosis fugax) in one eye may be rapidly followed by permanent irreversible loss of vision. If untreated, the other eye may also be affected. However, complete bilateral blindness is uncommon. Vision loss is caused by arteritis of branches of the ophthalmic artery or posterior ciliary arteries, which leads to ischemia of the optic nerve. Funduscopic findings may include ischemic optic neuritis with pallor and edema of the optic disk, scattered cotton-wool patches, and small hemorrhages. Later, the optic nerve atrophies. Rarely, central blindness results from infarction in the occipital cortex caused by arterial lesions in the distal cervical region or base of the brain. The incidence of visual disturbances has declined over the past 5 decades, and rates of recovery have improved, likely because giant cell arteritis is recognized and treated before visual disturbances develop.

Neurologic manifestations, such as strokes and transient ischemic attacks, can result when the carotid or vertebrobasilar arteries or branches are narrowed or occluded.

Thoracic aortic aneurysms and dissection of the aorta are serious, often late, complications and may progress in the absence of other symptoms.

Giant cell arteritis is suspected in patients > 55 if any of the following develops, especially if they also have symptoms of systemic inflammation:

Physical examination may detect swelling and tenderness, with or without nodularity or erythema, over the temporal arteries. Temporal arteries can become prominent. A temporal artery that rolls under the examiner’s fingers, rather than collapses, is abnormal. The large arteries of the neck and limbs and the aorta should be evaluated for bruits.

If the diagnosis is suspected, ESR, C-reactive protein, and CBC are determined. In most patients, ESR and C-reactive protein are elevated; anemia of chronic disease is common. Occasionally, platelets are elevated, and serum albumin and total protein, if measured, are low. Mild leukocytosis is commonly detected but is nonspecific.

If the diagnosis of giant cell arteritis is suspected, biopsy of an artery is recommended. Because inflamed segments often alternate with normal segments, a segment that appears abnormal should be sampled if possible. Usually, the temporal artery is biopsied from the side that is symptomatic, but the occipital artery can also be biopsied if it appears abnormal. The optimal length of temporal artery to remove is unclear, but longer samples, up to 5 cm, increase the yield. The added diagnostic value of contralateral biopsy is small. Treatment should not be delayed to do the biopsy. Because inflammation resolves slowly, the temporal artery biopsy can be done up to 2 weeks after treatment is started.

Imaging of the aorta and its branches should be done at the time of diagnosis and then periodically after, even in the absence of suggestive symptoms or signs (see Table: Imaging Tests Used in Takayasu Arteritis Imaging Tests Used in Takayasu Arteritis Takayasu arteritis is an inflammatory disease affecting the aorta, its branches, and pulmonary arteries. It occurs predominantly in young women. Etiology is unknown. Vascular inflammation may... read more 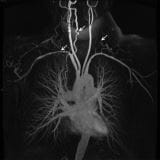 Treatment should be started as soon as giant cell arteritis is suspected. Even if biopsy is going to be delayed for up to 2 weeks, the pathology should still be evident.

Corticosteroids are the cornerstone of treatment. Corticosteroids rapidly reduce symptoms and prevent vision loss in most patients. The optimal initial dose, tapering schedule, and total length of treatment are debated. For most patients, an initial dose of prednisone 40 to 60 mg orally once a day (or equivalent) for 4 weeks, followed by gradual tapering, is effective.

If patients have visual disturbances, an initial dose of IV methylprednisolone 500 to 1000 mg once a day for 3 to 5 days can be tried in an attempt to help prevent further decline in vision, particularly in the contralateral eye. Saving vision probably depends more on how rapidly corticosteroids are started than their dose. Optic nerve infarction, once started, cannot be reversed regardless of corticosteroid dose.

If symptoms lessen, prednisone can be tapered gradually from doses of up to 60 mg/day based on the patient’s response, usually as follows: by 5 to 10 mg/day every week to 40 mg/day, by 2 to 5 mg/day every week to 10 to 20 mg/day, then further tapering until the drug is stopped. ESR alone should not be used to evaluate patient response (and disease activity). For example, in older patients, other factors, such as monoclonal gammopathies, can elevate ESR. Clinical symptoms must also be used. C-reactive protein can sometimes be more useful than ESR.

Older patients taking prednisone long term should be given an antiresorptive drug to increase bone mass and prevent osteoporosis.

In a randomized controlled trial, the anti-tumor necrosis factor drug infliximab had no benefit and potential harms were recognized.

Low-dose aspirin (81 to 100 mg orally once a day) may help prevent ischemic events and should be prescribed for all patients unless contraindicated.