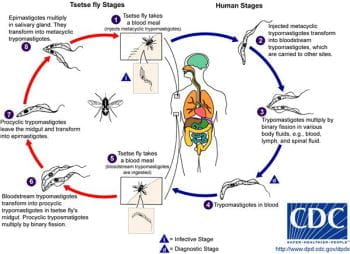 Sleeping sickness occurs only in parts of equatorial Africa where tsetse flies live. There are two forms of sleeping sickness. Each is caused by a different species of Trypanosoma. One form (caused by Trypanosoma brucei gambiense) occurs in West and Central Africa. The other form (caused by Trypanosoma brucei rhodesiense) occurs in East Africa. Both occur in Uganda. There has been a dramatic decrease (> 95%, with fewer than 1,000 cases in 2018) in the number of reported cases of African sleeping sickness over the past 20 years as a result of control efforts , and the disease has been targeted for eradication by the World Health Organization. On average one case is diagnosed in the United States each year, always in travelers returning to the United States or immigrants from endemic regions.

Trypanosoma brucei gambiense and Trypanosoma brucei rhodesiense are usually transmitted to people when an infected tsetse fly bites them and injects the protozoa into the skin. The protozoa move to the lymphatic system Overview of the Lymphatic System The lymphatic system is a vital part of the immune system. It includes organs such as the thymus, bone marrow, spleen, tonsils, appendix, and Peyer patches in the small intestine that produce... read more

and bloodstream, where they multiply. They then travel to organs and tissues throughout the body and eventually reach the brain. The infection is spread when a fly bites an infected person or animal, then bites another person.

An infected mother can transmit the protozoa to her baby during pregnancy or delivery. Rarely, people are infected through blood transfusions. Theoretically, the infection could be transmitted through an organ transplant from an infected donor.

In African trypanosomiasis, different parts of the body are affected in the following order:

How quickly the infection progresses and which symptoms it causes depend on which species is the cause.

A bump may develop at the site of the tsetse fly bite within a few days to 2 weeks. It turns dusky red and may become a painful and swollen sore.

The infection spreads to the blood and lymph over a period of weeks or months. Then people have fevers that come and go, chills, headaches, and muscle and joint pain. The face may swell temporarily. In some people, a rash develops, and lymph nodes along the back of the neck enlarge. Anemia may develop.

When the brain and cerebrospinal fluid are affected, headaches become persistent. People become drowsy, lose their concentration, and have problems with balance and walking. Drowsiness worsens, and people may fall asleep in the middle of activities.

Without treatment, damage to the brain progresses, leading to coma and death. Death occurs within months or within 2 or 3 years after symptoms develop, depending on the species causing it. Death sometimes results from undernutrition or other infections.

Doctors do a spinal tap Spinal Tap Diagnostic procedures may be needed to confirm a diagnosis suggested by the medical history and neurologic examination. Electroencephalography (EEG) is a simple, painless procedure in which... read more

(lumbar puncture) to obtain a sample of cerebrospinal fluid (the fluid that surrounds the brain and spinal cord) to determine whether the infection involves the cerebrospinal fluid and brain. Doctors check the fluid sample for the protozoa and for other signs of the infection. Such signs include increases in the fluid's pressure and in the number of white blood cells in the fluid.

People can reduce their chances of being bitten by a tsetse fly by doing the following:

Treatment of African sleeping sickness varies by species and stage of disease.

Sleeping sickness should be treated as soon as possible with drugs that are effective against these infections. However, some of the drugs can have serious side effects.

The drug used depends on which species (gambiense or rhodesiense) is causing the infection and whether the infection has spread to the brain and cerebrospinal fluid.

If the infection has not spread to the brain and cerebrospinal fluid, effective drugs include

These drugs are given by vein (intravenously). Pentamidine may also be injected into a muscle.

Fexinidazole is sometimes used for Trypanosoma brucei gambiense infection in Africa for people with blood and lymph node involvement or mild brain and cerebrospinal fluid involvement. It is not available or recommended for use in the United States.

If the infection has spread to the brain and cerebrospinal fluid, effective drugs include

These drugs are given intravenously.

Melarsoprol can have serious, sometimes life-threatening side effects, but in many African countries, it is often the only drug available for sleeping sickness that affects the brain and cerebrospinal fluid. Corticosteroids may be given to reduce the risk of some of these side effects.