The time to start solid food depends on the infant's needs and readiness. Generally, infants need solids when they are large enough to need a more concentrated source of calories than breast milk Breastfeeding Breast milk is the ideal food for newborns. Although babies may be fed breast milk or formula, the World Health Organization (WHO) and American Academy of Pediatrics (AAP) recommend exclusive... read more 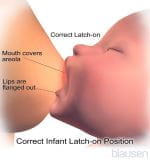 or formula Formula Feeding In the hospital, newborns are usually fed shortly after delivery, then ideally on demand thereafter. During the first week after birth, babies take ½ ounce to 2 ounces at a time, gradually increasing... read more

. This need is recognized when an infant takes a full bottle and is satisfied but then is hungry again in 2 or 3 hours or is consuming more than 40 ounces (about 1200 milliliters) of formula per day. This typically occurs by the age of 4 to 6 months. Many infants take solids after a breastfeeding or bottle-feeding, which both satisfies their need to suck and quickly relieves their hunger. Infants younger than 4 months of age do not need solid food for nutrition, cannot easily swallow solid food, and should not be force-fed with a spoon or by mixing baby food with formula in a bottle. The introduction of solid food before 4 months of age and after 6 months of age may be associated with an increased risk of food allergies Food Allergy A food allergy is an allergic reaction to a particular food. Food allergies are commonly triggered by certain nuts, peanuts, shellfish, fish, milk, eggs, wheat, and soybeans. Symptoms vary by... read more and celiac disease Celiac Disease Celiac disease is a hereditary intolerance to gluten (a protein found in wheat, barley, and rye) that causes characteristic changes in the lining of the small intestine, resulting in malabsorption... read more

Infants can develop food allergies. If many different foods are given in a brief period, it is difficult to tell which one may have been responsible for a reaction. Because of this difficulty, parents should introduce new, single-ingredient foods one at a time, about every 3 to 5 days. Once it is clear a food is tolerated, another one may be introduced.

Infant foods include single-grain cereals (such as iron-fortified rice cereal) and a variety of pureed fruits, vegetables, and meats. Doctors no longer think it matters in what order these foods are introduced. When starting a new food, it may take several tries over a period of weeks before an infant starts to enjoy a new food, so it is important for parents to not give up after the first or second try if the infant does not seem to like a particular new food.

The food should be offered on a spoon so that the infant learns the new feeding technique. By age 6 to 9 months, infants are able to grasp food and bring it to their mouth, and they should be encouraged to help feed themselves. Pureed home foods are less expensive than commercial baby foods and offer adequate nutrition. However, commercial preparations of carrots, beets, turnips, collard greens, and spinach are preferred for infants who are under age 1 year because they are screened for nitrates. High nitrate levels, which can cause methemoglobinemia (a disorder that affects the blood's ability to carry oxygen) in young children, are found in vegetables that are grown using water supplies contaminated by fertilizer.

Although infants enjoy sweet foods, sugar is not an essential nutrient and should be given only in small quantities, if at all. Sweetened dessert baby foods have no benefit for babies. Juice is a poor source of nutrition, contributes to cavities Cavities Cavities are decayed areas in the teeth, the result of a process that gradually dissolves a tooth’s hard outer surface (enamel) and progresses toward the interior. (See also Overview of Tooth... read more

, and should be limited to 4 to 6 ounces a day or avoided altogether.

Foods to avoid include

To prevent food allergies from developing, many parents have avoided giving their infant eggs, peanuts, and wheat. However, recent evidence suggests that introducing these foods between 4 months and 6 months of age might actually help protect against the development of food allergies. The evidence is not final, but, for most infants 4 months of age or older, parents do not need to wait before introducing any specific solid food. However, only one new food should be introduced every 3 to 5 days to make sure the food is tolerated. Recent evidence suggests that feeding infants peanut-containing products early on in life (between 4 months and 6 months of age) should be recommended because delaying the introduction of peanuts may actually increase the risk of developing a peanut allergy. Even infants who have severe eczema Atopic Dermatitis (Eczema) Atopic dermatitis (commonly referred to as eczema) is chronic, itchy inflammation of the upper layers of the skin that often develops in people who have hay fever or asthma and in people who... read more

, an egg allergy, or both should be introduced to age-appropriate peanut-containing food as early as 4 to 6 months of age to reduce their risk of developing a peanut allergy as long as the results of certain blood and skin tests Diagnosis indicate it is alright for them to have these foods. Parents should discuss with their pediatrician when and how to introduce various solid foods.

At or after age 1 year, children can begin drinking whole cow's milk. At age 2 years, children can switch to reduced-fat milk because their diet essentially resembles that of the rest of the family. Parents should limit milk intake to 16 to 24 ounces a day in young children. Children who drink too much milk may not get enough nutrients from other important foods and may develop iron deficiency.

Stools and Urine in Infants