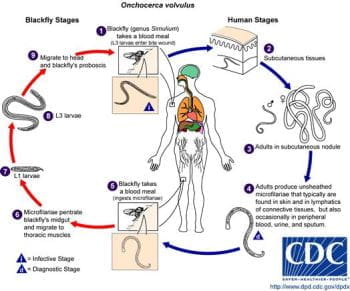 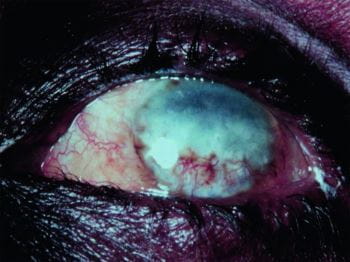 Sclerosing Keratitis Due to Onchocerciasis
Onchocerciasis is a filarial nematode infection with Onchocerca volvulus. Blackflies (Simulium species) are responsible for transmission. Symptoms are subcutaneous nodules, pruritus, dermatitis, adenopathy, atrophy and scarring of skin, and eye lesions that may lead to blindness. Diagnosis is by finding microfilariae in skin samples, the cornea, or the anterior chamber of the eye; identifying adult worms in subcutaneous nodules; or using polymerase chain reaction (PCR) to detect parasite DNA. Treatment is with ivermectin.

(See also Approach to Parasitic Infections Approach to Parasitic Infections Human parasites are organisms that live on or in a person and derive nutrients from that person (its host). There are 3 types of parasites: Single-cell organisms (protozoa, microsporidia) Multicellular... read more and Overview of Filarial Nematode Infections Overview of Filarial Nematode Infections Threadlike adult filarial worms reside in lymphatic or subcutaneous tissues. Gravid females produce live offspring (microfilariae) that circulate in blood or migrate through tissues. When ingested... read more .)

An estimated 21 million people are infected with onchocerciasis worldwide; about 14.6 million have skin disease and 1.15 million have visual impairment or loss. Onchocerciasis is the 2nd leading cause of infectious blindness worldwide (after trachoma Trachoma Trachoma is a chronic conjunctivitis caused by Chlamydia trachomatis and is characterized by progressive exacerbations and remissions. It is the leading cause of preventable blindness worldwide... read more

Onchocerciasis is most common in tropical and sub-Saharan regions of Africa. Small foci exist in Yemen, southern Mexico, Guatemala, Ecuador, Colombia, Venezuela, and the Brazilian Amazon. Blindness due to onchocerciasis is fairly rare in the Americas. People who live or work near rapidly flowing streams or rivers are the most likely to be infected. In addition to residents, longterm travelers (eg, missionaries, aid workers, field researchers) are at risk.

Onchocerciasis is spread by blackflies (Simulium species) that breed in swiftly flowing streams (hence, the term river blindness). Many blackfly bites are needed before disease develops.

Infective larvae inoculated into the skin during the bite of a blackfly develop into adult worms in 12 to 18 months. Adult female worms may live up to 15 years in subcutaneous nodules. Females are 33 to 50 cm long; males are 19 to 42 mm long. Mature female worms produce microfilariae that migrate mainly through the skin and invade the eyes.

Symptoms and Signs of Onchocerciasis

The subcutaneous (or deeper) nodules (onchocercoma) that contain adult worms may be visible or palpable but are otherwise asymptomatic. They are composed of inflammatory cells and fibrotic tissue in various proportions. Old nodules may caseate or calcify.

Patients may have enlargement of inguinal, femoral, or other lymph nodes. Localized swelling of the genitalia and inguinal hernias can develop.

Onchocercal dermatitis is caused by the microfilarial stage of the parasite. Intense pruritus may be the only symptom in lightly infected people.

Skin lesions usually consist of a nondescript maculopapular rash with secondary excoriations, scaling ulcerations and lichenification, and mild to moderate lymphadenopathy. Other skin abnormalities can include premature wrinkling, atrophy, patchy hypopigmentation, and loss of elasticity. In severe cases, patients may develop folds of atrophic skin in the lower abdomen and upper medial thighs ("hanging groin").

Onchocercal dermatitis is generalized in most patients, but a localized and sharply delineated form of eczematous dermatitis with hyperkeratosis, scaling, and pigment changes (Sowdah) is common in Yemen and Sudan.

Ocular involvement ranges from mild visual impairment to complete blindness. Lesions of the anterior portion of the eye include

Microfilariae may also be visible in the cornea and anterior chamber of the eye during slit-lamp examination.

Antibody detection is of limited value; there is substantial antigenic cross-reactivity among O. volvulus and other filaria and different helminths, and a positive serologic test does not distinguish between past and current infection.

Palpable nodules (or deep nodules detected by ultrasonography or MRI) can be excised and examined for adult worms, but this procedure is rarely necessary.

Ivermectin, the primary therapeutic option, reduces microfilariae in the skin and eyes and decreases production of microfilariae for many months. It does not kill adult female worms, but cumulative doses decrease their fertility. Ivermectin is given as a single oral dose of 150 mcg/kg, repeated at 6- to 12-month intervals. The optimal duration of therapy is uncertain. Although treatment could theoretically be continued for the life span of female worms (10 to 14 years), it is usually stopped after several years if pruritis has resolved and no evidence of microfilariae is detected by skin biopsy or eye examination.

Adverse effects of ivermectin are qualitatively similar to those of diethylcarbamazine (DEC) but are much less common and less severe. DEC is not used for onchocerciasis because it can cause a severe hypersensitivity (Mazzotti) reaction to released filarial antigens, which can further damage skin and eyes and lead to cardiovascular collapse.

Before treatment with ivermectin, patients should be assessed for coinfection with Loa loa Loiasis Loiasis is a filarial nematode infection with Loa loa. Symptoms include localized angioedema (Calabar swellings) in skin and subconjunctival migration of adult worms. Diagnosis is by detecting... read more

, another filarial parasite, if they have been in areas of central Africa where both parasites are transmitted because ivermectin can cause severe reactions in patients with heavy Loa loa coinfections.

Doxycycline can kill the endosymbiont bacteria Wolbachia, which O. volvulus requires for survival and embryogenesis. Doxycycline kills > 60% of adult female worms and sterilizes or decreases the fertility of those that survive, but doxycycline does not kill microfilariae. An alternative regimen includes one dose of ivermectin 150 mcg/kg, followed in 1 week by doxycycline 100 mg orally once or twice a day for 6 weeks. It is unclear whether the likely adherence difficulties of this regimen would result in improvement on the results of ivermectin-only treatment.

Surgical removal of accessible onchocercomas can reduce skin microfilaria counts, but it has been replaced by ivermectin therapy.

No drug has been shown to protect against infection with O. volvulus. However, annual or semiannual administration of ivermectin effectively controls disease and may decrease transmission. Onchocerciasis was virtually eradicated in participating West African countries (except Sierra Leone) by aerial insecticide spraying of Simulium breeding sites and ivermectin therapy of patients in the World Health Organization sponsored Onchocerciasis Control Programme that concluded in 2002.

Simulium bites can be minimized by avoiding fly-infested areas, by wearing protective clothing, and possibly by liberally applying insect repellents.