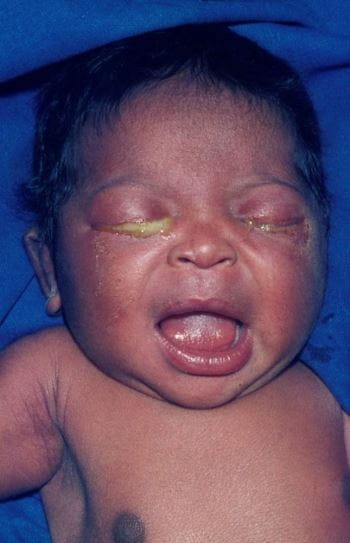 Causes of Conjunctivitis in Newborns

If certain bacteria are present in the mother's vagina, they can be passed to the newborn during delivery. Such bacteria include Chlamydia Chlamydial and Other Nongonococcal Infections Chlamydial infections include sexually transmitted diseases of the urethra, cervix, and rectum that are caused by the bacteria Chlamydia trachomatis. These bacteria can also infect the membranes... read more

Chemical conjunctivitis is a reaction to the eye drops that newborns receive to prevent infection.

Symptoms of Conjunctivitis in Newborns

Symptoms of conjunctivitis may vary depending on the cause of the infection.

Conjunctivitis caused by chlamydia usually begins 5 to 14 days after delivery but sometimes as late as 6 weeks after. Newborns have swollen eyelids and a watery discharge from the eyes that contains increasing amounts of pus. The infection can sometimes be severe.

Conjunctivitis caused by gonorrhea usually begins 2 to 5 days after delivery. Newborns have severe inflammation of the eyelids and discharge of pus from the eyes. Without treatment, blindness may occur.

Conjunctivitis caused by chemicals, such as eye drops, usually begins within 6 to 8 hours after the drops are put in and goes away by itself within 2 to 4 days.

Conjunctivitis caused by other bacteria begins from 4 days up to several weeks after delivery.

Diagnosis of Conjunctivitis in Newborns

Doctors evaluate the newborn's symptoms and appearance of the eyes.

Samples of eye discharge are sent to a laboratory to identify the infecting organism.

Prevention of Conjunctivitis in Newborns

In the United States, erythromycin ointment or drops are routinely put into each of the newborn's eyes after delivery to prevent conjunctivitis caused by Neisseria gonorrhoeae. In other countries, silver nitrate, tetracycline, or povidone iodine also may be used. Except for povidone iodine, these drugs do not prevent conjunctivitis caused by Chlamydia.

Newborns of women who have untreated gonorrhea should receive a single injection of the antibiotic ceftriaxone even if they are not yet ill.

Treatment of Conjunctivitis in Newborns

For conjunctivitis caused by Chlamydia, the antibiotic erythromycin or azithromycin is given by mouth.

For conjunctivitis caused by Neisseria gonorrhoeae, newborns are hospitalized and given the antibiotic ceftriaxone or cefotaxime by vein or injection.

For conjunctivitis caused by other bacteria, ointments containing polymyxin plus bacitracin, erythromycin, or tetracycline are applied.