Full review/revision Sep 2021 | Modified Sep 2022
VIEW PROFESSIONAL VERSION
Topic Resources
Atelectasis is a condition in which all or part of a lung becomes airless and collapses.

). For gas exchange to occur, the small air sacs within the lungs (alveoli) must remain open and filled with air. Alveoli are kept open by the elastic structure of the lung and by a liquid lining called surfactant. Surfactant counters the natural tendency of the alveoli to close (collapse). Periodic deep breaths, which people take unconsciously, and coughing also help keep alveoli open. Coughing expels any mucus or other secretions that could block the airways leading to the alveoli.

The Alveoli
The Trachea and Bronchi 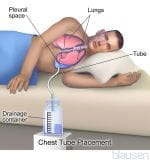 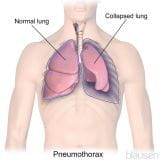 People who smoke can decrease their risk of atelectasis after surgery by stopping smoking Smoking Cessation While often very challenging, quitting smoking is one of the most important things smokers can do for their health. Quitting smoking brings immediate health benefits that increase over time... read more , ideally 6 to 8 weeks before surgery. After surgery, people are encouraged to breathe deeply, cough regularly, and move about as soon as possible. The use of devices to encourage voluntary deep breathing, called incentive spirometry Breathing exercises Chest physical therapy uses mechanical techniques, such as chest percussion, postural drainage, and vibration, to help clear secretions from the lungs. Respiratory therapists use several different... read more 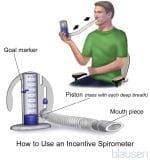