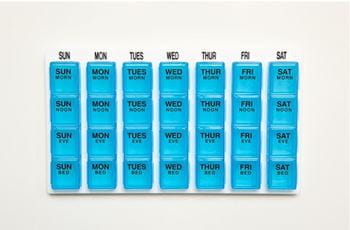 Some Drugs Particularly Likely to Cause Problems in Older People

Anticholinergic: What Does It Mean?

Some Disorders and Symptoms That Can Be Worsened by Drugs in Older...

Drugs, the most common medical intervention, are an important part of medical care for older people. Without drugs, many older people would function less well or die at an earlier age.

Older people tend to take more drugs than younger people because they are more likely to have more than one chronic medical disorder, such as high blood pressure, diabetes, or arthritis. Most drugs used by older people for chronic disorders are taken for years. Other drugs may be taken for only a short time to treat such problems as infections, some kinds of pain, and constipation. Almost 90% of older adults regularly take at least 1 prescription drug, almost 80% regularly take at least 2 prescription drugs, and 36% regularly take at least 5 different prescription drugs. When over-the-counter and dietary supplements are included, these rates are even higher. Older people who are frail, hospitalized, or in a nursing home take the most drugs. Nursing home residents are prescribed multiple different drugs to take on a regular basis.

Older people also take many nonprescription (over-the-counter, or OTC) drugs. Many OTC drugs are potentially hazardous for older people (see Precautions With Over-the-Counter Drugs: Older People Older People Certain groups of people, such as the very young, the very old, the very sick, and pregnant and breastfeeding women, are more vulnerable to harm from drugs, including over-the-counter (OTC)... read more ).

Benefits and Risks of Prescription Drugs

Many of the improvements in the health and function of older people during the past several decades can be attributed to the benefits of drugs.

However, drugs can have effects that are not intended or desired (side effects). Starting in late middle age, the risk of side effects related to the use of drugs increases. Older people are more than twice as susceptible to the side effects of drugs Overview of Adverse Drug Reactions Adverse drug reactions (adverse effects) are any unwanted effects of a drug. In the early 1900s, German scientist Paul Ehrlich described an ideal drug as a "magic bullet." Such a drug would... read more as younger people. Side effects are also likely to be more severe, affecting quality of life and resulting in visits to the doctor and in hospitalization.

Older people are more susceptible to the side effects of drugs for several reasons:

Because of these age-related changes, many drugs tend to stay in an older person’s body much longer, prolonging the drug’s effect and increasing the risk of side effects. Therefore, older people often need to take smaller doses of certain drugs or perhaps fewer daily doses. For example, digoxin, a drug sometimes used to treat certain heart disorders, dissolves in water and is eliminated by the kidneys. Because the amount of water in the body decreases and the kidneys function less well as people age, digoxin concentrations in the body may be increased, resulting in a greater risk of side effects (such as nausea or abnormal heart rhythms). To prevent this problem, doctors may use a smaller dose. Or sometimes other drugs can be substituted.

Older people are more sensitive to the effects of many drugs. For example, older people tend to become sleepier and are more likely to become confused when using certain antianxiety drugs (see table Drugs Used to Treat Anxiety Disorders Drugs Used to Treat Anxiety Disorders Anxiety is a feeling of nervousness, worry, or unease that is a normal human experience. It is also present in a wide range of psychiatric disorders, including generalized anxiety disorder,... read more ) or sleep aids to treat insomnia Treatment The most commonly reported sleep-related problems are insomnia and excessive daytime sleepiness. Insomnia is difficulty falling asleep or staying asleep, waking up early, or a disturbance in... read more . Some drugs that lower blood pressure Drug Treatment of High Blood Pressure High blood pressure is very common. It often does not cause symptoms; however, high blood pressure can increase the risk of stroke, heart attacks, and heart failure. Therefore, it is important... read more tend to lower blood pressure much more dramatically in older people than in younger people. Larger decreases in blood pressure can lead to side effects such as dizziness, light-headedness, and falls. Older people who have such side effects should discuss them with their doctor.

Many commonly used drugs have anticholinergic effects Anticholinergic: What Does It Mean? Drugs, the most common medical intervention, are an important part of medical care for older people. Without drugs, many older people would function less well or die at an earlier age. Older... read more

. These drugs include some antidepressants (amitriptyline and imipramine), many antihistamines (such as diphenhydramine, contained in over-the-counter sleep aids, cold remedies, and allergy drugs), and many antipsychotics (such as chlorpromazine and clozapine). Older people, particularly those with memory impairment, are particularly susceptible to anticholinergic effects, which include confusion, blurred vision, constipation, dry mouth, and difficulty starting to urinate. Some anticholinergic effects, such as reduction of tremor (as in the treatment of Parkinson disease) and reduction of nausea, are desirable, but most are not.

Anticholinergic: What Does It Mean?

A drug may have a side effect because it interacts with

Patients, doctors, and pharmacists can take steps to reduce the risk of drug–disease and drug–drug interactions. Because over-the-counter drugs and medicinal herbs can interact with other drugs, people should ask their doctor or pharmacist about combining the use of these drugs with prescription drugs.

Not following a doctor’s directions for taking a drug (called nonadherence) can be risky (see Adherence to Drug Treatment Adherence to Drug Treatment Adherence is the degree to which a person takes prescribed drugs as directed. (See also Overview of Response to Drugs.) Adherence to (compliance with) drug treatment is important. However, only... read more ). Older age alone does not make people less likely to take drugs as directed. However, up to half of older people do not take drugs as directed. Not taking a drug, taking too little, or taking too much can cause problems. Taking less of a drug because it has side effects may seem reasonable, but people should talk to a doctor before they make any changes in the way they take a drug.

Maximizing the Benefits and Reducing the Risks of Taking Drugs

Older people and the people who care for them can do many things to maximize the benefits and reduce the risks of taking drugs. Any questions about or problems with a drug should be discussed with a doctor or pharmacist. Taking drugs as instructed and communicating with health care providers is essential for avoiding problems and promoting good health.

Know about the drugs and disorders being treated:

Work closely with the doctor and pharmacist:

Remembering to Take Drugs as Prescribed

To benefit from taking drugs, people must remember not only to take their drugs but also to take them at the right time and in the right way. When several drugs are taken, the schedule for taking them can be complex. For example, drugs may have to be taken at different times throughout the day to avoid interactions. Some drugs may have to be taken with food. Other drugs have to be taken when no food is in the stomach. The more complex the schedule, the more likely people are to make mistakes. For example, bisphosphonates (such as alendronate, risedronate, and ibandronate), which are used to increase bone density, need to be taken on an empty stomach and with only water (at least a full glass). If these drugs are taken with other liquids or food, they are not absorbed well and do not work effectively.

If older people have memory problems, following a complex schedule is even harder. Such people usually need help, often from family members. The doctor can be asked about simplifying the schedule. Often, doses can be rescheduled to make taking the drugs more convenient or reduce the total number of daily doses. Also, over time, some drugs may not be needed any longer and can be stopped.

The following things can help people remember to take their drugs as prescribed:

Memory aids can help older people remember to take their drugs. For example, taking a drug can be associated with a specific daily task, such as eating a meal.

A pharmacist can provide containers that help people take drugs as instructed. Daily doses for 1 week or 2 weeks may be packaged in a plastic pack marked with the days or with the times of the day, so that people can keep track of doses taken by noting the empty spaces. Some pharmacies can package drugs in blister packs, so that the daily dose can be easily removed and kept track of. However, such packaging may cost a little more. Additionally, many pharmacies can adjust refill schedules so that regularly used drugs are picked up on a single day each month. This decreases confusion, helps reduce trips to the pharmacy, and minimizes mistakes filling pill organizers.

More elaborate containers with a computerized reminder system are available. These containers beep, flash, or talk at dosing time.

Apps that help people manage their drugs can be downloaded to multiple smartphones and tablets. These apps can help older people or their family members remember to take their drugs on time. Many of these apps include reminder alerts, which are sent to the device. Some of these apps may cost money.

Quality of Life in Older People
Others also read

Effects of Aging on the Digestive System