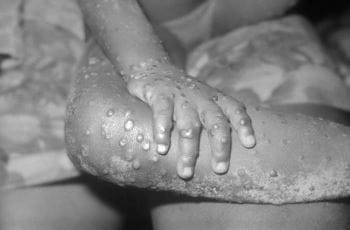 Monkeypox
Monkeypox is caused by the monkeypox virus, which is related to the smallpox virus and causes a similar, but usually milder illness.

Where monkeypox originates is unknown, but it is thought to be spread by small rodents and squirrels in the rain forests of Africa, mostly in western and central Africa. Most cases have occurred in the Democratic Republic of the Congo. Despite its name, the monkeypox virus does not live in monkeys.

Monkeypox is rare. But recently, the number of cases has been increasing in Africa. Reasons may include the following:

In the United States, an outbreak of monkeypox occurred in 2003, when infected rodents were imported as pets from Africa. The rodents spread the virus to pet prairie dogs, which then infected people in the Midwest.

Monkeypox is probably spread when people come into contact with body fluids from infected animals—for example, if an infected animal bites a person or if a person breathes in airborne droplets containing the virus. Spread from person to person is less common.

Monkeypox causes symptoms that are similar to those of smallpox Smallpox Smallpox is a highly contagious, very deadly disease caused by the variola virus. The disease is now considered eliminated. There have been no cases of smallpox since 1977. People can acquire... read more

. The illness begins with a fever, chills, headache, muscle aches, backache, extreme fatigue, and, unlike smallpox, prominent swollen lymph nodes. About 1 to 3 days after the fever appears, a rash develops. It often begins on the face, then spreads to other parts of the body, including the palms and soles.

As in smallpox, the monkeypox rash begins as flat, red spots. The spots then turn into blisters, which fill with pus (forming pustules). After several days, the pustules crust over.

Monkeypox can make people more likely to develop other infections. Some people with monkeypox develop bacterial infections in the skin and lungs.

The illness is usually milder than smallpox, but it can cause death. No deaths occurred during the 2003 outbreak in the United States.

Monkeypox typically lasts for 2 to 4 weeks.

Diagnosis of monkeypox may involve

The vaccine JYNNEOS is used for prevention of both smallpox Smallpox Smallpox is a highly contagious, very deadly disease caused by the variola virus. The disease is now considered eliminated. There have been no cases of smallpox since 1977. People can acquire... read more

and monkeypox. Also, past data from Africa suggests that the smallpox vaccine Smallpox Vaccine In the United States, routine vaccination with the smallpox vaccine was stopped in 1972 because smallpox had been eliminated in the United States. The last known case in the world occurred in... read more is at least 85% effective in preventing monkeypox, because monkeypox virus is closely related to the virus that causes smallpox.