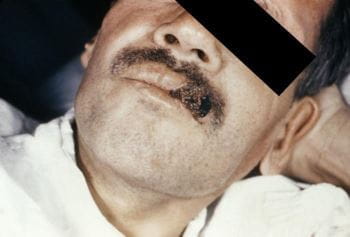 Fungal Tests
Histoplasmosis is an infection caused by the fungus Histoplasma capsulatum. It occurs mainly in the lungs but can sometimes spread throughout the body.

Histoplasmosis is particularly common in the eastern and midwestern United States, particularly along the Ohio and Mississippi river valley. It may occur in the Southern states. Histoplasmosis also occurs in parts of Central and South America, Africa, Asia, and Australia. Outbreaks associated with bat caves have occurred worldwide and in the United States have been reported in Florida, Texas, and Puerto Rico.

Histoplasma grows best in soil and dust that are contaminated with bird or bat droppings. Chicken farmers, construction workers, cavers (people who like to explore caves), and others who work with soil are most likely to inhale the spores produced by Histoplasma. The risk of infection is greatest when activity generates airborne spores (for example, tree or building removal at construction sites in areas where birds or bats live) or when exploring caves.

Severe illness can result when large numbers of spores are inhaled.

There are three main forms of histoplasmosis:

Most people infected with Histoplasma do not develop any symptoms, or they develop only very mild symptoms.

Symptoms vary, depending on the form of histoplasmosis.

Symptoms usually appear 3 to 21 days after people inhale the spores. People may feel sick, have a fever and a cough, and feel as though they have the flu. Symptoms usually disappear without treatment in 2 weeks and rarely last longer than 6 weeks.

People who inhale many spores may develop pneumonia. They may become very short of breath and be ill for months.

Acute pulmonary histoplasmosis is very rarely fatal but can become serious in people with a weakened immune system (such as those with AIDS).

Pneumonia may develop but is rarely severe, except in people with AIDS. Rarely, meningitis Subacute and Chronic Meningitis Subacute meningitis is inflammation of the layers of tissue that cover the brain and spinal cord (meninges) and of the fluid-filled space between the meninges (subarachnoid space) when it develops... read more (inflammation of the tissues covering the brain and spinal cord) may develop, causing a headache and a stiff neck. The liver, spleen, and lymph nodes may enlarge. Less commonly, the infection causes ulcers to form in the mouth and intestines. Rarely, the adrenal glands are damaged, causing Addison disease Addison Disease In Addison disease, the adrenal glands are underactive, resulting in a deficiency of adrenal hormones. Addison disease may be caused by an autoimmune reaction, cancer, an infection, or some... read more

Without treatment, this form is fatal in more than 90% of people. Even with treatment, death may occur rapidly in people with AIDS.

Most people recover without treatment within 2 to 6 months. However, breathing difficulties may continue to worsen, and some people cough up blood, sometimes in large amounts. Lung tissue is destroyed, and scar tissue forms. Lung damage or bacterial invasion of the lungs may eventually cause death.

) to take samples from the lungs. Or they may do a biopsy to take samples from the liver, bone marrow, or lymph nodes. These samples are sent to a laboratory for culture and examination. Urine and blood may be tested for proteins (antigens The immune system is designed to defend the body against foreign or dangerous invaders. Such invaders include Microorganisms (commonly called germs, such as bacteria, viruses, and fungi) Parasites... read more ) released by the fungus. A test to identify the fungus' genetic material Tests That Detect Genetic Material in Microorganisms Infectious diseases are caused by microorganisms, such as bacteria, viruses, fungi, and parasites. Doctors suspect an infection based on the person's symptoms, physical examination results,... read more (its DNA) may be done.

Doctors also take a chest x-ray to look for evidence of lung infection.

For some rare forms of the infection, the help of infectious disease specialists is required for diagnosis (and treatment).

Acute pulmonary histoplasmosis in otherwise healthy people rarely requires drug treatment. However, if people do not improve after a month, itraconazole, given by mouth, is often prescribed. If severe pneumonia develops, people are given amphotericin B intravenously, followed by itraconazole.

If people with AIDS develop histoplasmosis, they may need to take an antifungal drug, usually itraconazole, for the rest of their life. However, they may be able to stop the antifungal drug treatment after 1 year if their CD4 count CD4 count Human immunodeficiency virus (HIV) infection is a viral infection that progressively destroys certain white blood cells and can cause acquired immunodeficiency syndrome (AIDS). HIV is transmitted... read more

(the number of one type of white blood cell that decrease when AIDS is uncontrolled) increases to 150 or more cells per microliter of blood.

. Therefore, treatment should begin as soon as possible to limit lung damage.