Foreign Bodies in the Digestive Tract 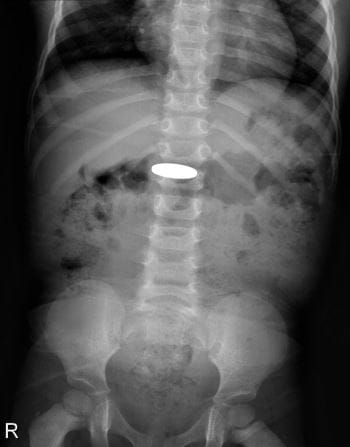 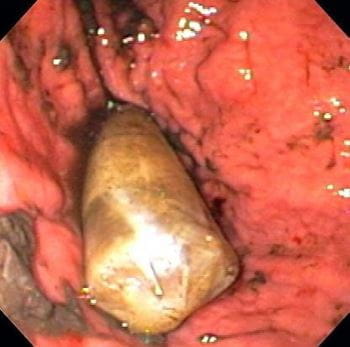 Foreign Body in the Stomach (Endoscopy) 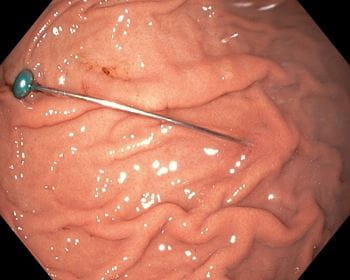 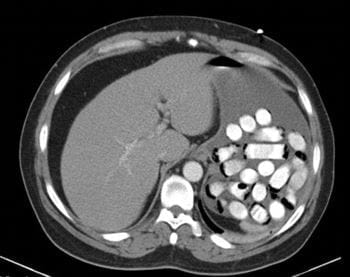 Foreign Body in the Stomach (Computed Tomography Scan)
Foreign bodies are ingested objects that can get stuck in the digestive tract and sometimes perforate (pierce) it.

Sometimes foreign bodies are swallowed purposely, as when smugglers (body packers Body Packing and Body Stuffing To smuggle drugs across borders or other security checkpoints, people may voluntarily swallow packets filled with drugs or hide those packets in body cavities. If a packet tears, a drug overdose... read more ) or body stuffers swallow balloons, packages, or vials filled with illegal drugs to evade detection. People who have mental health disorders may also purposely and repeatedly swallow foreign bodies.

If undigestible objects are small, they pass through the digestive system until they are passed with stool. However, larger objects or sharp ones, such as toothpicks and chicken or fish bones, may get stuck in the esophagus or stomach or at areas of the intestine that have sharp turns or are naturally narrow or narrowed by disease, a previous surgery, tumors, or abnormal structures. Objects that pass all the way through the intestines may still become stuck in the rectum.

Symptoms of Foreign Bodies in the Digestive Tract

Foreign bodies cause symptoms depending on the nature of the foreign body and where it becomes stuck.

Foreign bodies in the esophagus

A small blunt object that is swallowed may cause the sensation of something being stuck in the esophagus and difficulty swallowing Difficulty Swallowing Some people have difficulty swallowing (dysphagia). In dysphagia, foods and/or liquids do not move normally from the throat (pharynx) to the stomach. People feel as though food or liquids become... read more (dysphagia). This feeling may persist for a short time even after the object has passed into the stomach. A small sharp object that is swallowed may become lodged in the esophagus and cause pain, even though the person is able to swallow normally. When the esophagus is completely blocked, the person is unable to swallow anything, even saliva, and drools and spits constantly. The saliva may be stained with blood, and the person may gag and choke. The person may try to vomit, but nothing comes up.

Foreign bodies in the stomach and intestines

Foreign bodies in the rectum

Complications of foreign bodies in the digestive tract

Sharp objects can also cause a perforation of the digestive tract Perforation of the Digestive Tract Any of the hollow digestive organs may become perforated (punctured), which causes a release of gastrointestinal contents and can lead to sepsis (a life-threatening infection of the bloodstream)... read more . A perforation allows food, digestive juices, or intestinal contents including stool to leak into the abdomen. Such leakage is a medical emergency because it can cause peritonitis Peritonitis Abdominal pain is common and often minor. Severe abdominal pain that comes on quickly, however, almost always indicates a significant problem. The pain may be the only sign of the need for surgery... read more (inflammation of the peritoneal [abdominal] cavity).

Sometimes foreign bodies lead to blood in the stool.

If a person has swallowed an object filled with drugs, the object may rupture, which can then lead to an overdose of the drug.

Diagnosis of Foreign Bodies in the Digestive Tract

Often, a foreign body can be seen on x-rays of the abdomen and sometimes of the chest. Sometimes other imaging tests, such as computed tomography (CT), may be done to help identify and locate the foreign body.

Usually, endoscopy Endoscopy Endoscopy is an examination of internal structures using a flexible viewing tube (endoscope). Endoscopy can also be used to treat many disorders because doctors are able to pass instruments... read more (a visual examination of the digestive tract using a flexible tube called an endoscope) is done to determine the nature and exact location of the foreign body and to rule out an area narrowed by a tumor or other disorder.

Imaging Tests for Foreign Bodies in the Digestive Tract

Foreign bodies that are stuck in the rectum can often be felt by a doctor during a digital examination, in which the doctor inserts a gloved finger in the person's rectum.

Doctors may use a hand-held metal detector to detect metallic foreign bodies (such as coins and batteries), which is especially helpful in children. However, these metallic objects are usually detected with x-rays or sometimes a CT scan.

Treatment of Foreign Bodies in the Digestive Tract

Some foreign bodies pass spontaneously and require no treatment. Sometimes a doctor recommends that the person consume a lot of liquids to help excrete the object. Some small objects, such as toothpicks and fish bones, may remain in the gastrointestinal tract for many years without causing symptoms.

Foreign bodies in the esophagus

People who do not have symptoms of obstruction and who have not ingested a sharp object or disk or button batteries are observed by a doctor for up to 24 hours to see whether the object passes on its own. When a doctor suspects that a piece of food is stuck in the esophagus, the drug glucagon may be given by vein (intravenously) to relax the esophagus and allow the food to pass spontaneously through the digestive tract.

A doctor typically removes a foreign body that has not passed out of the esophagus within 24 hours because a delay in removal increases the risk of complications, including perforation, and decreases the likelihood of a successful removal.

Doctors can remove some objects that are stuck in the esophagus by pushing them into the stomach using an endoscope or by removing them with forceps, a net, or a basket passed through an endoscope.

Because sharp objects may pierce the wall of the esophagus, they must be removed urgently by endoscopy Endoscopy Endoscopy is an examination of internal structures using a flexible viewing tube (endoscope). Endoscopy can also be used to treat many disorders because doctors are able to pass instruments... read more . Batteries must also be removed urgently from the esophagus because they can cause internal burns.

Foreign bodies in the stomach and intestines

Foreign bodies that exit the stomach and pass into the small intestine usually pass the digestive tract with no problems. However, if a short, blunt object is stuck in the small intestine for more than 1 week and cannot be removed with endoscopy or the person has symptoms of intestinal obstruction, doctors may remove it surgically.

When an object suspected of being filled with drugs is detected in a person who does not have symptoms, the person is hospitalized and closely monitored in an intensive care unit Types of units People who need specific types of care may be put in special care units. Intensive care units (ICUs) are for people who are seriously ill. These people include those who have had a sudden, general... read more (ICU). Doctors may do surgery if the person has

Doctors usually do not do endoscopy to remove a drug-filled object because there is a high risk it may break open during removal and cause a serious overdose.

Foreign bodies in the rectum

A foreign body in the rectum may be removed endoscopically or manually depending on the type of object. Sometimes manual removal will require the person's anus to be numbed with injections of a local anesthetic Local anesthesia and regional anesthesia Surgery is the term traditionally used to describe procedures (called surgical procedures) that involve manually cutting or stitching tissue to treat diseases, injuries, or deformities. However... read more and held open with a special instrument. Doctors are then able to use forceps to grasp and remove the object. This procedure may require heavy sedation.

Foreign Objects in the Rectum

Perforation of the Digestive Tract

Perforation of the Digestive Tract