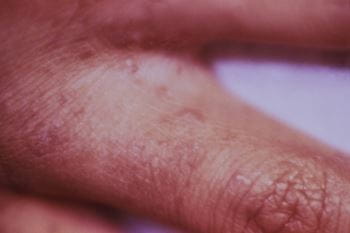 Scabies on the Fingers 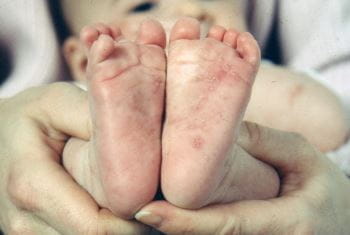 Scabies in an Infant (Infantile Scabies) 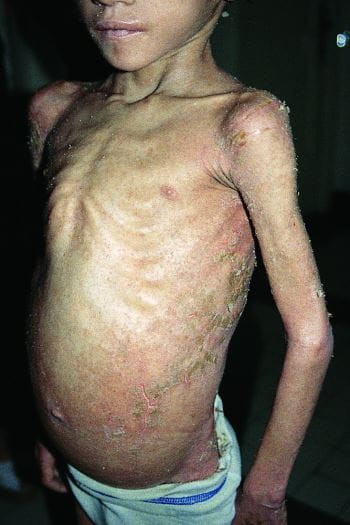 Scabies is caused by the mite Sarcoptes scabiei. Infestations occur worldwide. The female mite bites and tunnels into the topmost layer of the skin and deposits her eggs in burrows. Young mites (larvae) then hatch in a few days. The infestation causes intense itching, probably due to an allergic reaction to the mites. (See also Mite Bites Mite Bites Mites, like ticks, are closely related to spiders. Biting mites, sometimes carried as parasites on the bodies of humans and animals, may transmit disease to humans. (See also Introduction to... read more .)

The infestation spreads easily from person to person through physical contact, often spreading through an entire household. Human mites can live on fomites, which are physical objects such as towels, bedding, and clothing, from which they can infect people. However, once away from the human body, mites do not live very long. Animal mites may be spread to humans and cause itching, but they do not live very long or require treatment. Mites that cause scabies are usually destroyed by normal laundering (machine washing in hot water followed by drying in a hot dryer or ironing) or dry cleaning. The main risk factor is crowded conditions (as in schools, shelters, barracks, and some households). Scabies is not related to poor hygiene.

The hallmark of scabies is intense itching, which is usually worse at night. The burrows of the mites are often visible as very thin lines up to a ½ inch (about 1 centimeter) long, sometimes with a tiny bump—the mite—at one end. Often, scratching of the itchy burrows results in a bacterial infection of the skin (so-called secondary infection). Sometimes, only tiny bumps are seen, many of which are scratched open because of the itching.

The bumps can be anywhere on the body, including the breasts and penis. The bumps do not appear on the face in adults. The bumps first appear on the webs between the fingers, wrists, inner elbows, underarms, along the belt line, or buttocks. Over time, the burrows may become difficult to see because they are obscured by inflammation induced by scratching. People in warm climates develop small red bumps with few burrows.

In Black people and other people with dark skin, scabies can cause solid raised areas. In infants, the palms, soles, face, and scalp may be affected, especially behind the ears. In older people, scabies can cause intense itching but very mild skin symptoms, which makes it a challenge for doctors to diagnose.

Severe infestations cause large areas of thickened, crusted skin (particularly on the palms and soles in adults and on the scalp in children) that do not itch.

Scabies incognito is a different form of scabies that develops in people who use topical corticosteroids for extended periods of time. It is sometimes hard to recognize because it looks different from the usual forms of scabies, and the mites may be very difficult to find.

Usually, itching and the appearance of bumps and burrows are all that are needed to make a diagnosis of scabies. Sometimes doctors use a lens to magnify the skin and make the burrows visible. However, doctors often confirm the presence of mites, eggs, or mite feces by taking a scraping from the bumps or burrows and looking at it under a microscope.

For older children and adults, scabies can be cured by applying a cream containing permethrin or a lotion containing lindane to the entire body from the neck down and washing it off after 8 to 14 hours. This treatment is repeated a week later.

For infants and young children, permethrin is applied to the head and neck, avoiding the skin around the eyes and mouth, and over the entire body. The skinfolds, fingernails, toenails, and the navel should be thoroughly treated. Mittens can be put on infants to keep them from putting permethrin in their mouth. Additionally for infants, an ointment containing a formulation of sulfur in petrolatum can be applied at night and washed off in the morning. Lindane is not recommended for children under age 2, pregnant or lactating women, or people with a seizure disorder because of possible toxic side effects.

For adults and children 4 years of age and older, spinosad suspension (liquid) is applied to all of the skin from the neck down, including the soles of the feet. In bald people, the lotion should also be applied to the scalp, forehead, hairline, and temples. It should be allowed to dry for 10 minutes before getting dressed and then left on the skin for 6 hours before showering or bathing. This treatment should be repeated in 1 week. Contact with the eyes should be avoided.

Ivermectin taken by mouth in two doses given a week apart also is effective for people who are not helped by or cannot take drugs applied directly to the skin and is especially helpful for severe infestations in people with a weakened immune system.

Even after successful treatment that kills the mites, itching and bumps may persist for up to 3 weeks because of a continued allergic reaction to the mite bodies, which remain in the skin for a while. The itching can be treated with mild corticosteroid cream, antihistamines taken by mouth Systemic treatments Itching can be very uncomfortable. It is one of the most common reasons people see doctors who specialize in skin disorders (dermatologists). Itching makes people want to scratch. Scratching... read more , or both. Occasionally, the skin irritation and deep scratches lead to a bacterial infection, which may require antibiotics given by mouth.

Family members and people who have had close physical contact, such as sexual contact, with a person with scabies should be treated as well. Clothing, towels, and bedding used during the preceding few days should be washed in hot water and dried in a hot dryer, dry cleaned, or put in a closed plastic bag for at least 3 days.