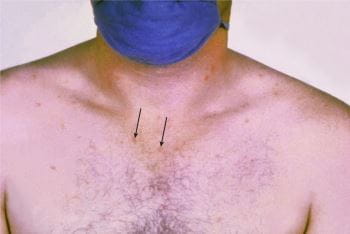 Typhoid Fever (Rose Spots)
Typhoid fever is caused by certain types of the gram-negative bacteria Overview of Gram-Negative Bacteria Bacteria are classified by how they appear under the microscope and by other features. Gram-negative bacteria are classified by the color they turn after a chemical process called Gram staining... read more Salmonella. It typically causes a high fever and abdominal pain.

(See also Overview of Bacteria Overview of Bacteria Bacteria are microscopic, single-celled organisms. They are among the earliest known life forms on earth. There are thousands of different kinds of bacteria, and they live in every conceivable... read more and Salmonella Infections Salmonella Infections The gram-negative bacteria Salmonella typically cause diarrhea and sometimes cause a more serious infection, typhoid fever. People are usually infected when they eat contaminated food... read more .)

Typhoid fever is common in areas where sanitary conditions are poor. Most cases in the United States are acquired while traveling in countries where the infection is common.

Salmonella Typhi is present only in people.

People who are infected excrete the bacteria in stool and, rarely, in urine. A few infected people develop chronic infection of the gallbladder or urinary tract. They continue to excrete the bacteria in stool or urine, even though they no longer have any symptoms. Such people are called carriers. Thus, they do not know they can spread the infection. During the early 20th century, one such woman, a cook named Mary Mallon, spread typhoid fever to many people and became known as Typhoid Mary.

Salmonella Typhi bacteria may contaminate food or drink when hands are inadequately washed after defecation or urination. Water supplies may be contaminated when sewage is inadequately treated. Flies may spread the bacteria directly from stool to food.

Occasionally, typhoid fever is spread by direct contact among children during play or between adults during anal-oral sex.

Spread through the bloodstream

These infections develop mainly when people are not treated or when treatment is delayed.

Typically, a flu-like illness begins about 8 to 14 days after infection. Typhoid fever symptoms begin gradually. People may have a fever, headache, sore throat, muscle and joint pains, abdominal pains, and a dry cough. They may lose their appetite.

After a few days, the temperature peaks at about 103 to 104° F (39 to 40° C), remains high for another 10 to 14 days, and returns to normal during the fourth week after symptoms started. Often the heartbeat is slow, and people feel exhausted. When the infection is severe, they may become delirious.

During the second week, a rash of flat, rose-colored spots develops on the chest and abdomen in about 10 to 20% of people.

People may be constipated at first, but after 2 weeks, diarrhea may occur. In about 1 to 2% of people, the intestine is torn (perforated) or bleeds. A few people have severe, sometimes life-threatening bleeding.

If infection spreads to other organs, symptoms of those infections may also develop.

In about 8 to 10% of untreated people, symptoms return about 2 weeks after the fever goes away.

To confirm the diagnosis of typhoid fever, doctors take samples of blood, stool, urine, other body fluids, or tissues and send them to a laboratory where the bacteria, if present, can be grown (cultured). The samples are examined and tested to determine whether Salmonella bacteria are present.

Tests to determine which antibiotics are likely to be effective (susceptibility tests Testing of a Microorganism's Susceptibility and Sensitivity to Antimicrobial Drugs Infectious diseases are caused by microorganisms, such as bacteria, viruses, fungi, and parasites. Doctors suspect an infection based on the person's symptoms, physical examination results,... read more ) are also done.

Stupor (unresponsiveness that requires vigorous stimulation to be aroused), coma, and shock are signs of severe infection and a poor prognosis.

People who travel to areas where typhoid fever is common should avoid eating raw vegetables and other foods served or stored at room temperature.

People should assume that ice and water (unless it is boiled or chlorinated before use) are unsafe. Sealed bottled water should be used for brushing teeth.

A vaccine given by mouth (orally) and a polysaccharide vaccine given by injection into a muscle can help prevent typhoid fever. Both vaccines are about 70% effective and have few side effects.

Vaccination is recommended for

In the United States, most cases of typhoid fever occur in travelers returning from parts of the world where typhoid fever is common. Most of these cases could have been prevented if people had been vaccinated.

When antibiotics are used, the risk of death is reduced to less than 1%. Complete recovery may take weeks or months.

The preferred antibiotics include

Resistance to antibiotics is common and is increasing in areas where typhoid fever is common. Resistance is also increasing in the United States because of returning travelers who were infected in those areas.

The antibiotic chloramphenicol is used worldwide. However, it can damage cells in bone marrow that make blood cells. Also, Salmonella Typhi bacteria are becoming increasingly resistant to it.

If the infection is severe, corticosteroids are also given, particularly when people are delirious, comatose, or in shock.

While people have a fever, bed rest is advised. A clear liquid diet can help minimize diarrhea. People should not use aspirin, laxatives, or enemas.

Relapses can occur after treatment is stopped. This infection is milder than the initial illness and is treated the same way.

Carriers must report to the local health department and are prohibited from working with food until tests show that the bacteria have been eradicated. Taking antibiotics for 4 to 6 weeks may eradicate the bacteria in many carriers.

If carriers have gallbladder disease, surgery to remove the gallbladder may be effective. However, such surgery does not guarantee that the bacteria are eradicated.