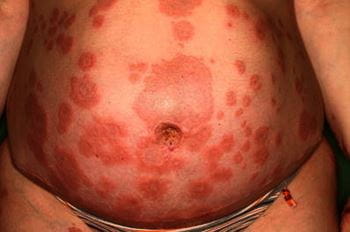 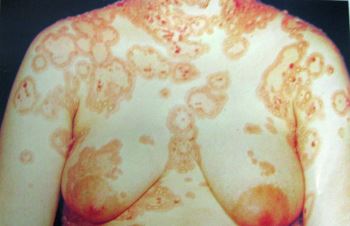 Pemphigoid Gestationis
Pemphigoid gestationis is an intensely itchy rash that occurs during or just after pregnancy.

The rash of pemphigoid gestationis can begin as flat or raised red spots that often first form on the abdomen around the navel. Then blisters develop and the rash spreads. The blisters are small or large, irregularly shaped, and fluid-filled. The rash is extremely itchy. The rash can spread to the rest of the body, including the trunk, arms, legs, palms, and soles. The face and mouth are usually not affected.

The rash usually appears during the 2nd or 3rd trimester. However, it may appear earlier or immediately after delivery. Typically, the rash worsens soon after delivery and disappears within a few weeks or months. It often reappears during subsequent pregnancies and sometimes reappears if the woman later takes oral contraceptives. It can also reappear while women are having their periods or when the ovaries release an egg (at ovulation).

Usually, the baby is unaffected. But occasionally, the baby is born with a similar rash, which usually disappears without treatment within a few weeks. Also when women have pemphigoid gestationis, the risk of problems, including death of the baby, are increased if the baby is born prematurely or has not grown as much as expected (intrauterine growth restriction Small-for-Gestational-Age (SGA) Newborn A newborn who weighs less than 90% of newborns of the same gestational age at birth (below the 10th percentile) is considered small for gestational age. Newborns may be small because their parents... read more ).

Pemphigoid gestationis is diagnosed based on the rash's appearance. Sometimes doctors take a sample of skin from the affected area (skin biopsy) and test it for abnormal antibodies.

Tests, such as a nonstress test, ultrasonography, or electronic fetal monitoring Fetal monitoring Labor is a series of rhythmic, progressive contractions of the uterus that gradually move the fetus through the lower part of the uterus (cervix) and birth canal (vagina) to the outside world... read more , may be done to evaluate the fetus.

Applying a corticosteroid cream (such as triamcinolone) directly to the skin often helps relieve the itching.

For more widespread rashes, a corticosteroid (such as prednisone) is given by mouth.

Antihistamines that do not cause drowsiness, taken by mouth, can also be used to relieve the itching.