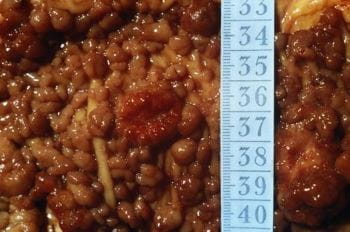 Familial Adenomatous Polyposis
Familial adenomatous polyposis is an inherited disorder in which many (often 100 or more) precancerous polyps develop throughout the large intestine Large Intestine The large intestine consists of the Cecum and ascending (right) colon Transverse colon Descending (left) colon Sigmoid colon (which is connected to the rectum) read more and rectum Rectum and Anus The rectum is a chamber that begins at the end of the large intestine, immediately following the sigmoid colon, and ends at the anus (see also Overview of the Anus and Rectum). Ordinarily, the... read more during childhood or adolescence.

). Familial adenomatous polyposis occurs in 1 in 8,000 to 14,000 people. The polyps are present in 50% of people by age 15 and in 95% of people by age 35. In nearly all untreated people, the polyps develop into cancer of the large intestine or rectum (colorectal cancer Colorectal Cancer Family history and some dietary factors (low fiber, high fat) increase a person’s risk of colorectal cancer. Typical symptoms include bleeding during a bowel movement, fatigue, and weakness... read more

People with familial adenomatous polyposis also have an increased risk of developing cancer in the duodenum, pancreas, thyroid, brain, and liver. People with familial adenomatous polyposis can develop other complications (previously termed Gardner syndrome), particularly various types of noncancerous tumors. These noncancerous tumors develop elsewhere in the body (for example, on the skin, skull, or jaw).

Symptoms of familial adenomatous polyposis are the same as with other colonic polyps (see symptoms of polyps of the colon and rectum Symptoms A polyp is a projecting growth of tissue from the wall of a hollow space, such as the intestines. Some polyps are caused by hereditary conditions. Bleeding from the rectum is the most common... read more

). Most people have no symptoms, but a few have rectal bleeding. Usually the bleeding is only in microscopic amounts.

Colonoscopy Endoscopy Endoscopy is an examination of internal structures using a flexible viewing tube (endoscope). Endoscopy can also be used to treat many disorders because doctors are able to pass instruments... read more is done to make the diagnosis of familial adenomatous polyposis.

Children of people with familial adenomatous polyposis may be tested for a type of liver cancer (hepatoblastoma) from birth until 5 years of age.

Because nearly all people with familial adenomatous polyposis develop cancer, doctors typically recommend surgery be done soon after the diagnosis is made. There are several procedures. Complete removal of the large intestine and rectum (called total colectomy or proctocolectomy) eliminates the risk of cancer. Because the person then has no rectum, the cut-off end of the small intestine is permanently attached to a surgical opening in the abdominal wall (ileostomy). Bodily wastes are eliminated through the ileostomy into a disposable bag.

As an alternative to ileostomy, sometimes doctors can remove the large intestine and only the lining of the rectum (polyps grow from the lining). Then, they can form the end of the small intestine into a pouch that is connected to the anus. The pouch functions somewhat like a rectum, eliminating the need for an ileostomy.

As another alternative to ileostomy, only the large intestine is removed and the rectum is joined to the small intestine. This procedure does not eliminate the possibility of rectal polyps developing, which could then turn into cancer. Thus the remaining part of the rectum must be inspected by sigmoidoscopy frequently, so that new polyps can be removed. If new polyps appear too rapidly, however, the rectum must also be removed.

After people have their entire rectum and large intestine removed, they should have an endoscopy of the stomach and upper section of the small intestine (duodenum) at regular intervals to look for cancer. Doctors may also recommend people have their thyroid screened every year.

Some NSAIDs are being studied for their ability to reverse the growth of polyps in people with familial adenomatous polyposis and in people with polyps or cancer of the large intestine. Their effects are temporary, however, and once these drugs are discontinued, the polyps begin to grow again.

Polyps of the Colon and Rectum

Polyps of the Colon and Rectum