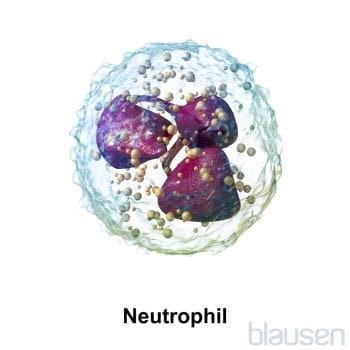 Neutrophil
Neutropenia is an abnormally low number of neutrophils (a type of white blood cell Overview of White Blood Cell Disorders White blood cells (leukocytes) are an important part of the body’s defense against infectious organisms and foreign substances (the immune system). To defend the body adequately, a sufficient... read more

Neutrophils are a type of white blood cell Overview of White Blood Cell Disorders White blood cells (leukocytes) are an important part of the body’s defense against infectious organisms and foreign substances (the immune system). To defend the body adequately, a sufficient... read more

that serve as the body's major defense against acute bacterial and certain fungal infections. Neutrophils usually constitute about 45 to 75% of all white blood cells in the bloodstream. Without the key defense provided by neutrophils, people have problems controlling infections and are at risk of dying from an infection.

Neutropenia may resolve quickly when the infection resolves or the exposure stops.

Chronic neutropenia may last for months or years.

The typical lower limit of the neutrophil count is about 1500 cells per microliter of blood (1.5 × 109 cells per liter). As the count goes below this level, the risk of infection increases. Neutropenia severity is classified as:

When the neutrophil count falls below 500 cells per microliter (severe neutropenia), the risk of infection increases greatly. People may even develop infections by the bacteria that normally live harmlessly in the mouth and intestines.

Neutropenia has many causes, but they fall into two main categories:

Rapid use or destruction of neutrophils

, myelofibrosis Myelofibrosis Myelofibrosis is a disorder in which fibrous tissue in the bone marrow replaces the blood-producing cells, resulting in abnormally shaped red blood cells, anemia, and an enlarged spleen. Myelofibrosis... read more , or deficiencies of vitamin B12 Vitamin B12 Deficiency Vitamin B12 deficiency can occur in vegans who do not take supplements or as a result of an absorption disorder. Anemia develops, causing paleness, weakness, fatigue, and, if severe, shortness... read more or folate Folate Deficiency Folate deficiency is common. Because the body stores only a small amount of folate, a diet lacking in folate leads to a deficiency within a few months. Not eating enough raw leafy vegetables... read more (folic acid). People who have received radiation therapy that involves the bone marrow may also develop neutropenia.

Many drugs, including (but not limited to) phenothiazine, sulfa drugs, and many drugs used in cancer treatment (chemotherapy), as well as certain toxins (benzene and insecticides) can also impair the bone marrow’s ability to produce neutrophils.

Neutropenia itself has no specific symptoms, so it is usually diagnosed when an infection occurs. People may develop fever and painful sores (ulcers) around the mouth and anus. Bacterial pneumonia and other severe infections can occur.

In chronic neutropenia, people may not have many symptoms if the number of neutrophils is not extremely low.

When neutropenia is caused by drugs, people may have a fever, rash, and swollen lymph nodes.

In cyclic neutropenia, people can have symptoms that come and go as their white blood cell count rises and falls over time.

When people have frequent or unusual infections or if people are taking drugs known to cause neutropenia, doctors order a blood test (complete blood count) to make the diagnosis. A low neutrophil count indicates neutropenia.

Doctors ask about drug or toxic exposures and look for infections or other disorders that can cause the neutropenia. They frequently take a sample of bone marrow Bone Marrow Examination Red blood cells, most white blood cells, and platelets are produced in the bone marrow, the soft fatty tissue inside bone cavities. Sometimes a sample of bone marrow must be examined to determine... read more through a needle. The bone marrow sample is examined under a microscope to determine whether it looks normal, has a normal number of neutrophil stem (precursor) cells, and shows normal development of neutrophils. By determining whether the number of stem cells is decreased and whether these cells are maturing normally, doctors may be able to determine whether the problem lies in faulty production of the cells or whether too many cells are being used or destroyed in the blood. Sometimes, the bone marrow examination indicates whether other diseases, such as leukemia or other cancers, or infections, such as tuberculosis, are affecting the bone marrow.

If a hereditary disorder is suspected, doctors may do genetic testing.

Because people with neutropenia might not have all the typical symptoms and examination findings of an infection, doctors ask people detailed questions about their symptoms and examine them from head to toe. Tests are done for any concerning findings, for example, if the person has abdominal discomfort, computed tomography (CT) of the abdomen may be done.

Even if no other symptoms are present, if the person has a fever, doctors typically also do urinalysis and urine culture, blood cultures Culture of Microorganisms Infectious diseases are caused by microorganisms, such as bacteria, viruses, fungi, and parasites. Doctors suspect an infection based on the person's symptoms, physical examination results,... read more , and a chest x-ray. When doctors do a culture, they take a sample of the material being tested (in this case, urine or blood) and send it to the laboratory to grow bacteria or other organisms that may be present.

The most important thing is to treat any infection that is found. In people with severe neutropenia, infections can rapidly become serious or fatal. Even if doctors cannot diagnose a specific infection, people who have neutropenia and fever are presumed to have an infection. Such people are given antibiotics effective against common infectious organisms.

The treatment of neutropenia itself depends on its cause and severity. Drugs that may cause neutropenia are stopped whenever possible, and exposures to suspected toxins are avoided.

Sometimes the bone marrow recovers by itself without treatment. The neutropenia accompanying viral infections (such as influenza) may be transient and resolve after the infection has cleared. People who have mild neutropenia generally have no symptoms and may not need treatment.

People who have severe neutropenia can rapidly die as a result of infection because their bodies lack the means to fight invading organisms. When these people develop infections, they are usually hospitalized and immediately given strong antibiotics, even before the cause and exact location of the infection are identified. Fever, the symptom that usually indicates infection in people who have neutropenia, is an important sign that immediate medical attention is needed.

Growth factors called colony-stimulating factors, which stimulate the production of white blood cells by the bone marrow, are sometimes helpful and are given as a injection (under the skin or into a vein).

Corticosteroids may help if the neutropenia is caused by an autoimmune disorder. Antithymocyte globulin or other types of therapy that suppress the activity of the immune system may be given by vein when a disorder such as aplastic anemia is present.

When neutropenia is caused by another disorder (such as tuberculosis or leukemia or other cancers), treatment of the underlying disorder may resolve the neutropenia. Bone marrow (or stem cell) transplantation is not used to treat neutropenia per se, but it may be recommended to treat certain serious causes of neutropenia, such as aplastic anemia or leukemia.