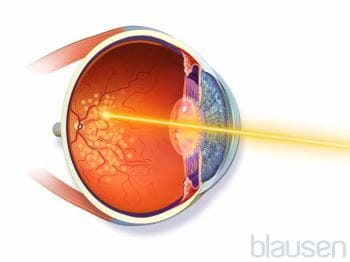 The Retina and Optic Nerve
Diabetic retinopathy is damage to the retina (the transparent, light-sensitive structure at the back of the eye) as a result of diabetes.

Diabetes mellitus Diabetes Mellitus (DM) Diabetes mellitus is a disorder in which the body does not produce enough or respond normally to insulin, causing blood sugar (glucose) levels to be abnormally high. Urination and thirst are... read more is among the leading causes of blindness in the United States and other developed countries, particularly among working-age adults. After several years, some retinal change occurs in almost all people with diabetes, regardless of whether they use insulin therapy. People with diabetes who also have high blood pressure are at much higher risk of developing diabetic retinopathy because both conditions tend to damage the retina. Pregnancy can cause diabetic retinopathy to worsen.

Repeated exposure to high levels of sugar (glucose) in the blood make the walls of small blood vessels, including those in the retina, weaker and, therefore, more prone to damage. Damaged retinal blood vessels leak blood and fluid into the retina.

The extent of retinopathy and vision loss is related mostly to the following:

Diabetes mellitus can cause two types of changes in the eye.

In nonproliferative diabetic retinopathy, small blood vessels in the retina leak fluid or blood and may develop small bulges. Areas of the retina affected by leakage may swell, causing damage to parts of the field of vision.

At first, the effects on vision may be minimal, but gradually vision may become impaired. Blind spots may occur, although these may not be noticed by the person and are usually discovered only if testing is done. If leakage occurs near the macula, the central area of the retina, which contains a high density of light-sensing cells, the central vision may be blurry. Swelling of the macula (macular edema) due to leakage of fluid from blood vessels can eventually cause significant loss of vision. However, people may not have vision loss even with advanced retinopathy.

In proliferative diabetic retinopathy, damage to the retina stimulates the growth of new blood vessels. The new blood vessels grow abnormally, sometimes leading to bleeding (hemorrhage) or scarring. Extensive scarring may cause detachment of the retina Detachment of the Retina Detachment of the retina is separation of the retina (the transparent, light-sensitive structure at the back of the eye) from the underlying layer to which it is attached. People notice a sudden... read more . Proliferative diabetic retinopathy results in greater loss of vision than does nonproliferative diabetic retinopathy. It can result in total or near-total blindness due to a large hemorrhage into the vitreous humor (the jellylike substance that fills the back of the eyeball, also called the vitreous) or to a type of retinal detachment called traction retinal detachment. Growth of new blood vessels can also lead to a painful type of glaucoma (neovascular glaucoma). In neovascular glaucoma, abnormal blood vessels that have formed in the iris close the space between the iris and the cornea, blocking the drainage of fluid from the eye and causing buildup of pressure in the eye (glaucoma Glaucoma Glaucomas are a group of eye disorders characterized by progressive optic nerve damage (often, but not always, associated with increased eye pressure) that can lead to irreversible loss of vision... read more ). Macular edema can cause significant loss of vision.

Symptoms of proliferative diabetic retinopathy may include blurred vision, floaters (black spots) or flashing lights in the field of vision, and sudden, severe, painless vision loss.

Doctors diagnose nonproliferative and proliferative diabetic retinopathy by examining the retina with an ophthalmoscope. Doctors use fluorescein angiography Angiography A variety of tests can be done to confirm an eye problem or to determine the extent or severity of an eye disorder. Each eye is tested separately. In general, angiography involves injecting... read more to help determine the location of the leakage as well as areas of poor blood flow and the areas of new abnormal blood vessel formation, determine the extent of retinopathy, develop a treatment plan, and monitor the results of treatment. Doctors take color photographs of the retina during fluorescein angiography.

Optical coherence tomography Optical Coherence Tomography A variety of tests can be done to confirm an eye problem or to determine the extent or severity of an eye disorder. Each eye is tested separately. In general, angiography involves injecting... read more (an imaging study) can help assess the severity of macular edema and assess how well the person is responding to treatment.

The best way to prevent diabetic retinopathy is to control blood sugar and keep blood pressure at normal levels. People with diabetes should have an annual eye examination, in which the pupil is dilated with eye drops, so that retinopathy can be detected and any necessary treatment can be started early. Pregnant women with diabetes should have these eye examinations about once every 3 months.

Treatment of diabetic retinopathy is aimed at controlling blood sugar and blood pressure.

Other treatments include laser photocoagulation, in which a laser beam is aimed into the eye at the retina to slow the growth of abnormal new retinal blood vessels and decrease leakage. Laser photocoagulation may need to be repeated. If bleeding from damaged vessels has been extensive, a procedure called vitrectomy may be needed. In this procedure, blood is removed from the cavity in which the vitreous humor lies. Vision often improves after vitrectomy is done to treat vitreous hemorrhage, traction retinal detachment, or macular edema. Laser treatment only rarely improves vision, but it commonly prevents further deterioration.